You know from previous posts how much I adore Kimpton hotels — they welcome dogs with open arms, they have an irresistible, quirky decor, they ply guests with refreshing/cooling/restorative beverages and nibblies at all hours, and the company nobly supported the most recent travel bloggers’ fundraiser (Passports with Purpose), contributing in no small way to the building of a village in India. The weekend I just spent at the Kimpton’s Harbor Court Hotel in San Francisco, however, was not blissful, because of the room I chose. I should mention that I paid my own way at the Harbor Court Hotel — I’ll always let you know when something I’m reviewing has been paid for by someone else.

On the positive side

The hotel has a fantastic location on the bay, just across from the Ferry Building (nirvana for anyone who loves food) and with a magnificent view of the Bay Bridge. It’s a mere matter of crossing the street to find a beautiful walk along the Bay, and an excellent piece of lawn, just under the “Cupid’s Span” statue. 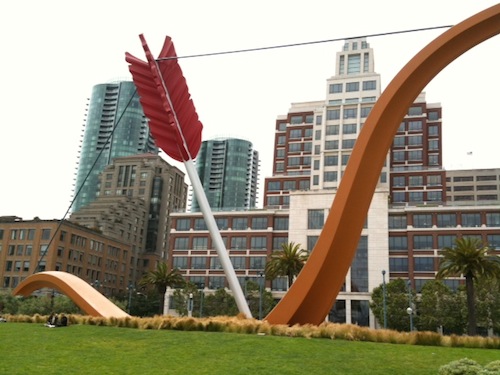 "Cupid's Span," a Claes Oldenburg sculpture across the street from the hotel -- and a small park perfect for a visiting dog

The hotel building itself, the 1908 YMCA building (and still partly occupied by the YMCA), is lovely — you can’t tell it’s lovely from what’s now the main entrance, on Steuart Street, but when you’re walking on the Bay, look back at it and admire.

The Harbor Court Hotel building, from the Embarcadero. Ozumo, the house restaurant, is on the ground floor on the right-hand side

The hotel restaurant, Ozumo, is outstanding. I went there with friends on one night, and returned alone the next night, and I’d return tonight if I could. The food is delicious, the service is attentive and kind, and the restaurant has the same Bay views the hotel has.

We were welcomed warmly, and enjoyed, at various times, coffee and wine in the lobby. There is a hotel dog, a French Bulldog belonging to one of the staff members — he was friendly, but we didn’t see much of him. Because I’m a Kimpton InTouch member (and you should be too), wifi was free and I received a $10 minibar credit, which I promptly spent on chips and a beer. There was no pet fee, and there are no pet size maximums.

On the negative side

The room I chose (a “Queen Room”) was tiny and overlooked the air shaft. The bathroom was small and unimproved. When I tell you that the TV was located near the ceiling, over the closet door, and that after one look outside I never opened either the sheers or the blinds, you’ll get the idea. The friend I was visiting, a veteran of the hotel, tells me that it’s crucial to reserve a “Bay View Room.” It won’t be any larger, but having the windows open, and seeing what you’ll see, will improve your spirits considerably.

The front desk is warm-hearted, but certainly not polished. I find that charming, but it may test your patience. Breathe deeply, and think about the restorative beverages.

The friend I mentioned ended up staying at another San Francisco Kimpton hotel, the Hotel Palomar, because the Harbor Court Hotel was full by the time she made her reservations. I had a chance to see that lobby, and her room, as well, and I can report that the Hotel Palomar (at 4th and Market) is nicely located for downtown shopping, the hotel dog (a senior chocolate Lab named Maverick, who sleeps on a low-lying part of the reception desk) is a sweetheart, and my friend’s room was about three times the size of mine (and her bathroom was glamorous). On balance, though, I preferred the Harbor Court’s location and restaurant — and next time, I’ll spend a little more to get a room that doesn’t depress me.