The Kimpton Hotel Group just gets it. Every Kimpton hotel I’ve stayed in has been centrally-located, quirkily attractive, friendly, clean and packed with thoughtful details — and Portland’s Hotel Monaco is no exception. We spent this past weekend there, and I can’t think of a single negative comment. I should mention that we paid our own way at the Hotel Monaco — I’ll always let you know when something I’m reviewing has been paid for by someone else. 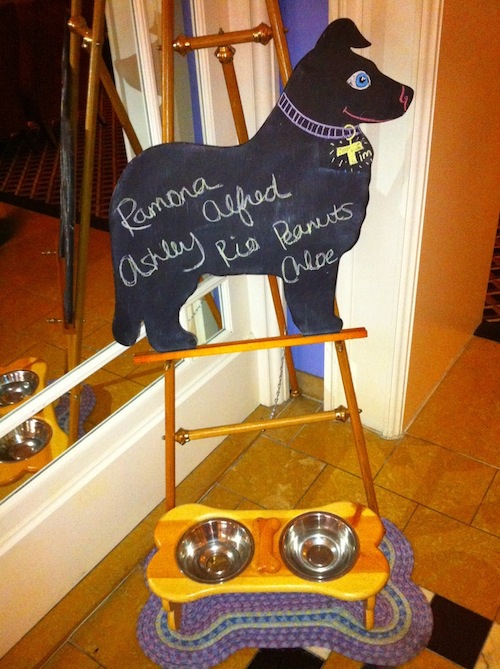 Chloe's name is on the front leg

The experience starts at the door, where you’re greeted with a chalkboard bearing your pet’s name, and never stops. I would say that the front desk staff is freakishly kind and cheerful, except that every staff member we encountered was equally cheerful and equally ready to lick Chloe on the nose. We arrived in the middle of the afternoon wine tasting (since it’s Oregon, there is also beer) in the gorgeous front room — a cheerful hubbub of guests, plus a handful of guest dogs — but whenever there wasn’t wine, there was complimentary sangria, or complimentary coffee, or complimentary Arnold Palmers (an unexpected and particularly well-timed offering after a long walk in the heat). 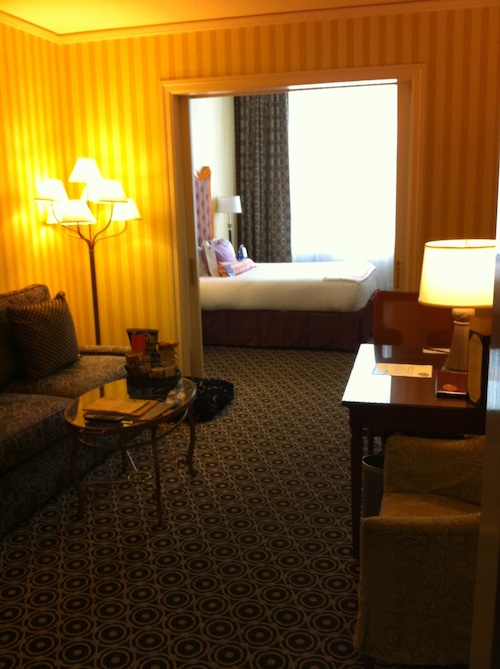 This is not a good picture. Trust me, the room was nice.

The rooms are clean, cheerful and well-decorated. We had a king suite, so ours was large, but I’ve stayed in a regular-sized room (the “queen deluxe”) in this hotel in the past, and it too was spacious. Take a moment and sign up with the Kimpton InTouch Guest Loyalty Program — it’s free, and you’ll be rewarded with free wi-fi, the pillows and newspaper of your choice, and a $10 coupon for the mini-bar (plus a variety of other perks, but those were the ones we enjoyed on this trip). Other things we liked? The bed was comfortable. There was a coffee maker and Starbucks coffee (we left our Do Not Disturb sign up all day Saturday, but the staff, undaunted, taped packets of replacement coffee to our door). The shampoo, conditioner and body soap (Gilchrist & Soames) were in dispensers attached to the shower wall, which is so much less wasteful than mini-bottles. There was a stocked mini-bar — so rare these days — and a tray of tasty snack foods. Sure, they were crazy expensive, but they were there. 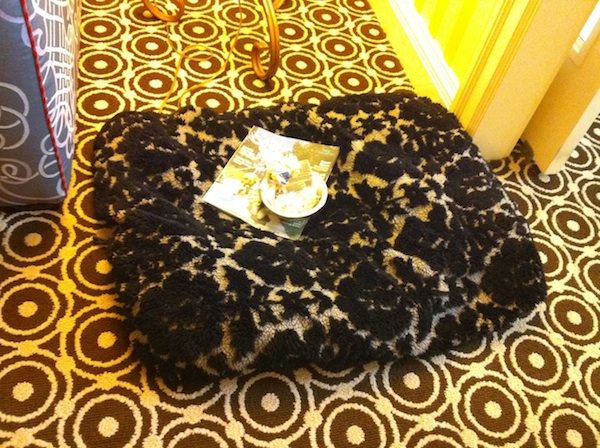 Dog bed and other goodies

Although I did not spring for the “Portland Unleashed Pet Package” (doggie makeover, trail mix, maps of local pet-friendly attractions, beer for you and your dog, a public transit ticket for your dog, and a leash), we were still provided with a heap of dog goodies, including a dog bed and bowl for use in our room, a packet of poop bags, a copy of a local pet-friendly newssheet, and a brand-new chew toy. The Hotel Monaco does not charge a pet fee or require a deposit, and there are no restrictions on pet size or number of pets. While we were there, there were between six and ten pets staying in the hotel simultaneously — we saw them from time to time, in the lobby or in the halls, but we never heard a peep out of them.

Please note that the pet-friendly rooms are located on the third floor, which I believe is the guest room floor closest to the front door. Once you exit the hotel, however, there aren’t a lot of good choices for nearby bathroom breaks. The closest park, O’Bryant Square (two blocks away, at Park and Washington) is pretty bleak, but it’ll work if your dog finds mulch chips inspiring. Your best choice for a (tiny) patch of grass is four blocks away, at the southeast corner of 5th and Burnside (look for the “Car Wash Fountain“). Your best choice for a really nice park is the long park, officially called South Park Blocks, that stretches along Park between Salmon and Jackson. The nearest corner of that park (Salmon and Park) is eight blocks away from the Hotel Monaco.