When you learn that Ink48 is a Kimpton hotel, you know that of course it’s pet-friendly, and that means, among many other things, that there’s no pet fee — an important point in a spendy town like New York. This particular Kimpton may also be a hair less expensive than the other NYC Kimptons, and if I’m right about that, I’ll make another guess that it’s because it’s in a neighborhood that’s a hair farther away from the bright lights of the big city. That, too, was a plus for us. Add in a really friendly staff (even by Kimpton’s high standards) and a hotel restaurant (called PRINT) that one of my most discerning and hard-traveling friends describes as “genuinely good, not just hotel good,” and you’ve got a place to bookmark. 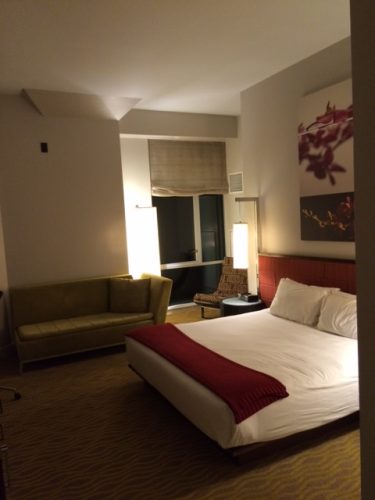 Our first room — we arrived late at night, and that window opened onto an airshaft (not as bad as it sounds, since it was quiet). 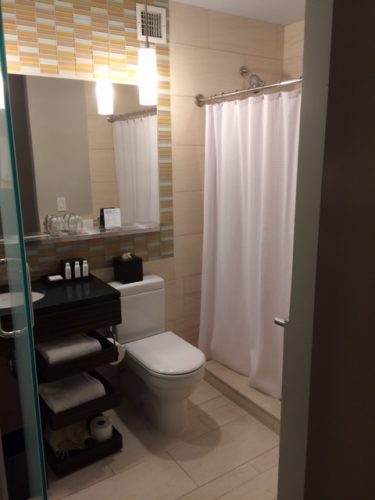 Both of our bathrooms looked like this first one — very pleasant, great water pressure, thumbs up. Both bathrooms, however, had doors that don’t block sound, so take that into consideration when choosing your roommate. 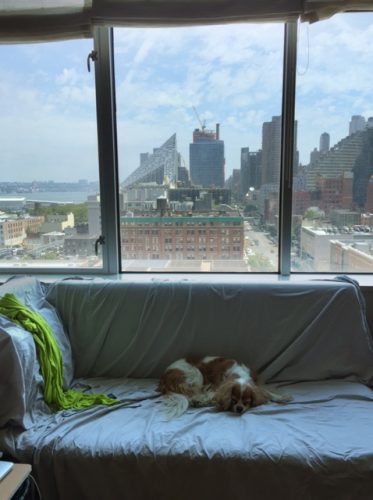 The view (north to Lincoln Center) from our second room — that’s our sheet on the couch, protecting it from Chloe’s fur.

We spent a week at Ink48, in two different rooms, and I feel that we got a good sense of its pros and cons. I’ll just launch in, in no particular order.

The hotel’s location is both a pro and a con. On the corner of 11th Ave. and W. 48th St., Ink48 occupies a former printing house (that fact and its location explain its name). The building has old-fashioned charm from the outside (the inside is modern, but interesting and comfortable), and there is a sprinkling of other older buildings around, including the Landmark Tavern, cattycorner across 11th. Just under and behind the hotel is a stable for the Central Park carriage horses — it, and the horses, are scrupulously maintained, but I slowed down, walking past, because I like the smell of a stable — and altogether, if you squint a bit to block out the big car dealerships that otherwise occupy 11th, it’s just possible to imagine yourself back in the 19th century, when there was no 12th Ave. and the Landmark Tavern was on the waterfront.

Other positives include a useful bus line (the M-12) heading south on 11th and north on 12th (here’s a Manhattan bus map for you). The Landmark Tavern is a source of solidly good pub fare; there’s an excellent bakery (Sullivan Street Bakery) and coffee shop (The Jolly Goat) a block away; the Gotham Market, just two blocks south, is a collection of eateries, a couple of which have outdoor (and therefore workable with a dog) tables; and we had a terrific weekend brunch at 44&X. There is a fenced dog park in the De Witt Clinton Park, four blocks north, and it even includes a small dog area (Chloe now pooh-poohs dog parks — her sole interest is squirrels, and she wants to be on the move, seeking them out — but the folks using the dog park were friendly and encouraged her to stay and play). For mid-length walks, we headed west a block, and then south along the river, admiring the Intrepid and other waterfront installations. For longer walks, we went north to Central Park, about 15 blocks (say, 20 minutes) away. For quick bathroom breaks, I simply walked Chloe around the block (turning right out the front door, then right on 47th, right on 12th, and right again on 48th). Even late at night, there was sufficient activity at the block’s many car maintenance shops (and at the stable) that I felt safe.

On the negative side of the balance, the M-12 bus didn’t always meet our needs. The nearest metro stop is at 8th Ave. and W. 50th — not a dire walk unless it’s hot, which, alas, it totally was. Quite often we ended up just catching a taxi, which, you know, adds up. I’ve listed a handful of restaurants worth seeking out (and heck, you could be very happy eating every meal in the hotel’s restaurant), but otherwise this is a neighborhood of service establishments — car dealerships, plumbing suppliers, corporate offices, what looks like the world headquarters of FedEx — and it feels like a bit of a backwater.

That said, the hotel’s own rooftop bar is very pleasant, and worth heading up to — it attracts a crowd, but the staff does a good job of keeping the traffic organized. 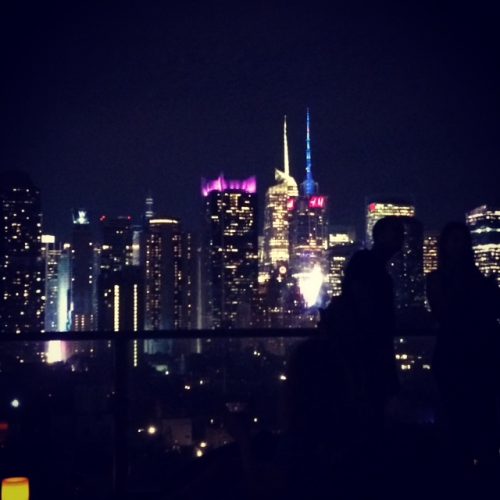 Very nearby, across W. 48th, is another rooftop cantina that keeps late and noisy hours. I strongly urge you to bring earplugs, in case your room ends up being within earshot. (Good friends who live on the Upper West Side recommend this brand of earplugs, and I can vouch for their efficacy. I don’t like earplugs, but after a couple of nights of the cantina, I gave them a try — and slept like a baby.)

We will happily return to Ink48, partly because we developed a soft spot for its odd location, partly because the hotel restaurant is so darned good — but largely because the staff, across the board, was so kind to Chloe (and to us). As you’ll learn when you arrive, there’s a big opening under the reception desk, and it only took an entrance or two for Chloe to learn that if she hurtled across the reception area and under the desk, she’d be met with rapture by the front desk staff. The folks who held the doors cuddled her and told us about their pets. The housekeeping staff kindly stepped over her when she sacked out near the lobby door to the back-of-house. Heavens, how I appreciate a Kimpton hotel. 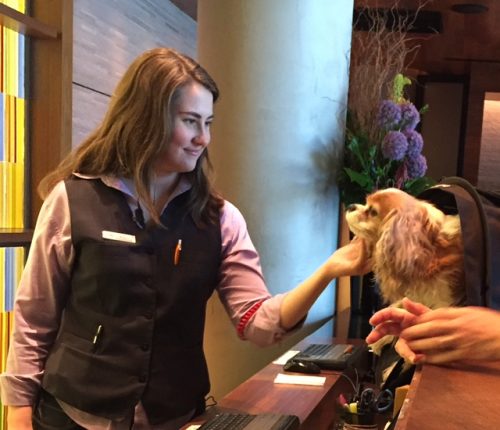 Chloe bidding farewell to Bridget, one of her beloved front desk buddies

We paid our own way at Ink48. There is no pet fee (there never is, at a Kimpton hotel). Join the Karma rewards club, and wi-fi is also free (plus you get the odd goodie from time to time, like $10 to spend on your room’s minibar — mind you, that’ll buy you a canlette of Pringles and a bag of M&Ms, just to choose a couple of items at, ahem, random, but still, free is nice).