I arrived in Vancouver too late to go to the Saturday sessions of the travel bloggers’ conference I’d driven north for, so I dropped off our gear and Chloe and I headed out on foot. We were staying in the center of town, at the dog-friendly L’Hermitage Hotel, so we could have found interesting walks in almost any direction, but I chose to walk south on Richards to the George Wainborn Park (leashed dogs okay), then turned right and walked along the seawall to the Aquabus stop at the bottom of Hornby St.

Leashed dogs are welcome on the Aquabus ferries, the tiny, bathtub-toy boats that criss-cross False Creek, a big inlet separating downtown Vancouver from the Fairview neighborhood. I couldn’t get a picture of Chloe on the ferry, because it took less than a minute (and yet cost $3.25) to travel from the Hornby St. stop to Granville Island, but here’s a picture of a docked Aquabus vessel, with our dog-loving captain in the foreground: 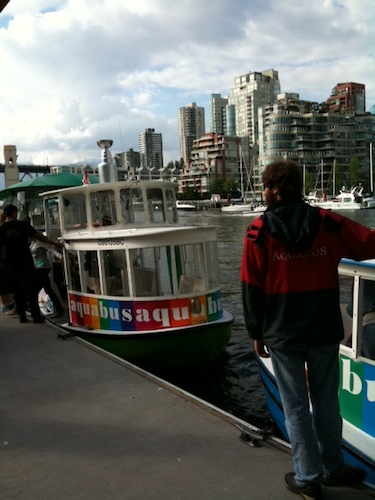 This was taken standing on the dock on Granville Island, looking back at downtown Vancouver

The trip was brief, but the views were spectacular. If I’d had more cash (you pay the captain directly, so there’s no opportunity to use a credit card), I would have sprung for a mini-cruise. Instead, I decided, in a flush of enthusiasm, to walk home, all the way around False Creek.

Granville Island is a food-lover’s paradise, but since I was walking with Chloe (and had failed to bring her stealth bag with me), I couldn’t tie on a bib and dive into the Farmer’s Market. I wasn’t interested in a sit-down meal, so I didn’t research which restaurant patios tolerate dogs. Instead, we walked up and down the tiny streets and alleys, meeting other dogs and their owners, and peering in shop windows. Both of the stores I wanted to inspect more closely welcomed dogs — just ask before you step inside, to make sure.

I tore myself (and a new scarf) away from the painted silk place in Railspur Alley, turned left just before Railspur Park (here’s a map of Granville Island), turned right on Johnston St., and then left again into an alley that passes under and through the Emily Carr University building. That brought us to a group of houseboats, and a shoreline walk that we followed around the eastern end of Granville Island and the perimeter of False Creek. 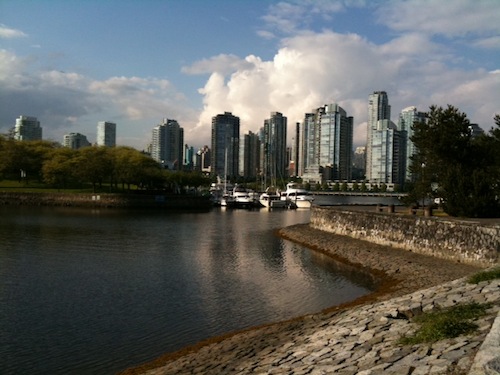 View from the False Creek Promenade towards downtown Vancouver, over the eastern shoulder of Granville Island

The views were beautiful, and it was a delight to see how well-used, and well-loved, the False Creek Promenade is. The downside of its popularity is that you have to keep a sharp eye, and ear, out for bicyclists and skateboarders. This is no place for a Flexi leash — if you’ve got one, lock it at its shortest length.

All told, Chloe and I walked for about six miles. Romping wasn’t on our agenda, but if we’d had an excess of energy, there were a couple of locations along the Promenade where dogs are allowed off-leash. Both were in Charleson Park, located at the north end of Laurel St., and were well-signed: 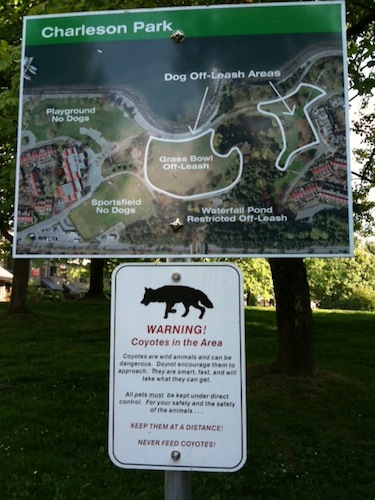 The big meadow and a related area are always off-leash; the waterfall pond in between is apparently on-leash during the day, but off-leash otherwise. Also, hello? What? There are coyotes.

We walked past the Olympic Village, and past Science World, with its nifty geodesic dome. We walked by Creekside Park at the eastern end of False Creek, and then peeled off alongside Rogers Arena to return to our hotel. It was an excellent afternoon, but if you’d prefer a shorter jaunt, I suggest hopping back on the Aquabus at the Olympic Village and crossing over to Yaletown.