I don’t fly on Sun Country, so I was delighted when reader Bev sent me an e-mail (with photos!) about a couple of recent trips she took with her Shih Tzu on two Sun Country 737s (one an -800 series, and the other either an -800 or a -700 series). Since she didn’t have a tape measure with her (and who, besides me, does?), Bev cleverly measured the available under-seat space with her feet and a laptop case.

She told me that her Shih Tzu traveled in a medium Sherpa carrier, which she oriented front-to-back (not left-to-right) under the seat in front of her. A medium Sherpa carrier is 17″ long, 11″ wide, and 10.5″ tall. She sat in a middle seat, since Sun Country does not allow in-cabin dogs under aisle seats. She measured the width of the under-seat space using her feet:

“There was about 4″ on the left side of the carrier to the leg of the seat (enough for my shoe), then maybe 3″ on the right side (tight fit for my shoe). The front of the bag did stick out a couple of inches but not enough to create a problem.” 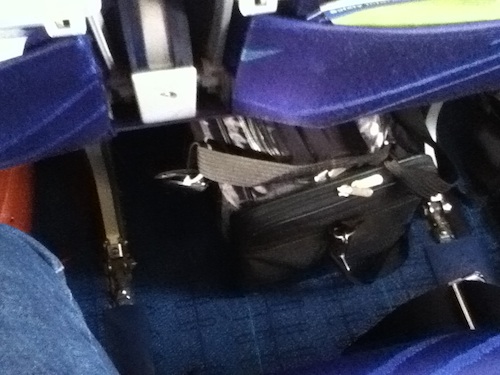 View showing space on either side of a medium Sherpa carrier

And the height? On her first flight, she observed that “the top of the carrier had maybe a 1/2″ inch to spare but I wouldn’t say for sure. I did not have to force it so there was some space to be able to slide it in.” On her return flight, she propped a 13″ laptop case up next to her dog’s carrier, and decided that the available space is “probably 9.5 or 10″ high.”

Bev noted that “the carrier has to be tilted to get it into position under the seat,” and on the return trip she noticed an obstruction under the seat. She wasn’t sure what it was, but her guess (and mine) is that it’s a container for a flotation device. Since Sherpa bags have pretty rigid ends, but flexible tops, that makes sense to me — she’d have to tilt the rigid end under the flotation device to get the carrier past it, then the top of the carrier would flex to fit around the container.

It’s likely that Bev couldn’t reach the obstruction to figure out what it was, given how short Sun Country’s pitch is. As Bev said, “I can’t stress enough there is not much room between your seat and the back of the seat in front of you. I could not reach down to the carrier without intruding on the person’s space on either side of me.”

Bev sent me a picture of the aisle’s under-seat space, and it looks like it’s very narrow indeed — probably wide enough for Bev’s carrier, oriented front-to-back (so I appreciate her regret that that space isn’t available to in-cabin dogs), but much too narrow for Chloe’s large SturdiBag, oriented left-to-right.