Two flights ago, I was progressing through the security line with Chloe in her carrier over my shoulder, and a TSA screening dog came up from behind us with his or her handler. The dog stopped briefly, clearly (to me) having noticed Chloe’s presence, and the handler (also briefly, thank goodness) tensed up. I waggled my shoulder with the carrier in the handler’s direction and said something like “there’s a pup in here,” and the team continued down the line. That was interesting enough to tell you about, so you’d be prepared for a similar encounter, but for once procrastination was my friend: On our most recent flight, there was someone posted at the security line calling out for folks traveling with pets to leave the line altogether, and walk to the other security line (not currently being reviewed by a canine team). 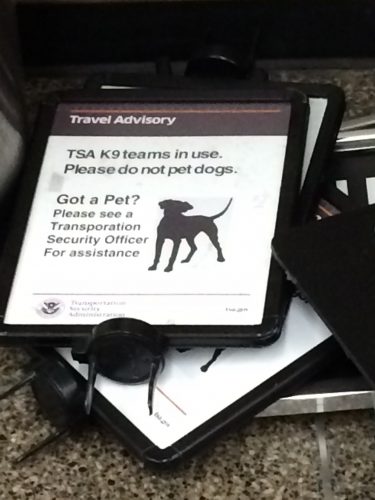 I departed the first security line so promptly that I couldn’t get a picture of one of these signs in action on a post; here’s an example, though, from a pile waiting for future use. So far, I’ve only seen them at Seattle’s airport.

Apparently it’s not just a momentary distraction for a TSA canine to encounter a pet; or perhaps the TSA just wants to reduce the number of times its teams alert unnecessarily. Whatever the reason, and to preserve your own adrenaline glands from wear and tear, keep an eye out for TSA canine teams and give them as much advance notice as you can of your pet’s presence.