Speaking of reader Giuliana (responsible for my last post about JetBlue’s recent pet policy change), it’s high time I passed on her report about the pet relief area at Dallas Fort Worth International’s (DFW) Terminal C. You may recall that I’ve located and written about two of the pet relief areas serving DFW’s Terminal D, but I didn’t have time to get to the other areas at Terminals A and C. I asked for reports from any of you passing through DFW, and Giuliana responded to the call.

Thank goodness she did, because DFW’s website is very thin on guidance: All it says is that “Designated grassy areas [are] located on the lower level outside security.” Terminal C apparently has two pet relief areas, one at either end; Giuliana visited the one at the northern end, near Gate 2 (there’s another one at the southern end, near Gate 39). According to Giuliana, “It was a little hard to find if you don’t know about of it ahead of time. If there were signs in the terminal, I didn’t see them. You walk down towards gate C1, but you have to exit at C4, go down the escalator and then continue walking outside in the direction of C1.” 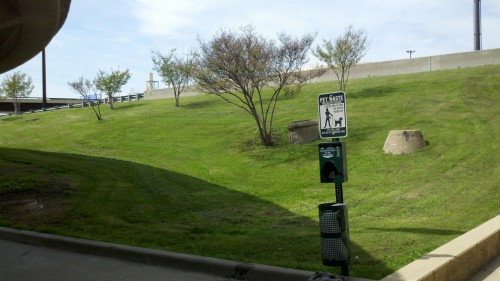 As you can see, it’s an unfenced bit of sloping lawn, provided with a pole bearing poop bags and a trash bin, but nothing else.

Thanks to Google Maps, I can give you this overview of where that pet relief area is: 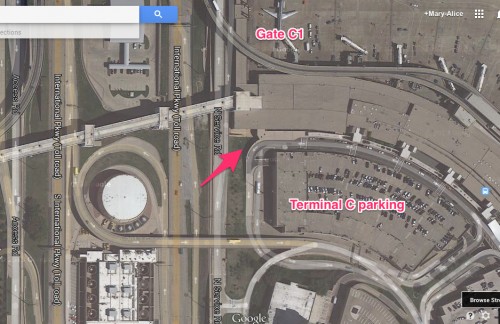 And this street view:

The pet relief area from the service road that runs down the backbone of the airport, looking east (pretty much where the arrow is in the previous photo) — Terminal C parking to the right, Terminal C baggage claim behind and to the lower left. You can just see the poop bag pole at the tip of the lawn closest to the terminal.

Giuliana was pleased to find that the security line nearest the pet relief area was easy to re-enter: “A bonus was the security area coming back in near the relief area was small (didn’t seem like they were set up for huge lines). There were only 2 people ahead of me, both crew members.”

She was also happy to report that Puddy, her Cairn Terrier (then weighing 11 lbs. and measuring 11″ at the shoulder and 15″ long), fit comfortably in a large Sherpa carrier, which in turn worked fine under her seats on a Boeing 737-800 and a 757 (both American Airlines): “I wasn’t able to get dimensions, but he fit under the seat both side/longwise (there was a bump under there to get the bag end under, but not awful). I chose to orient him sideways though so I could rub his side with my foot, which comforted him on takeoff/landing. A couple inches of the bag stuck out, so I just put my legs on either side.”