I am, as you know by now, a woman obsessed with airport pet relief areas. Every U.S. airport has one, by law, and most of them are located outside the airport, on the “land” side of security. That means that travelers with working service dogs and travelers with pets have to exit the airport with their companions to locate and use the pet relief area — all well and good if that airport is your final stop, but a nail-biting challenge if you’re merely pausing between flights. An increasing number of airports are installing pet relief areas on the “air” side of security, and I’m happy (ecstatic!) to report that there are two more to add to the list.

I’ve praised JFK’s T5 outdoor pet relief area in the past, but JetBlue has outdone itself with its new “T5 Rooftop” space. Located across from Gate 28 (here’s a terminal map), it’s a well-designed outdoor space incorporating tables and chairs, foliage and bits of lawn, and the “T5 Wooftop” pet relief area. 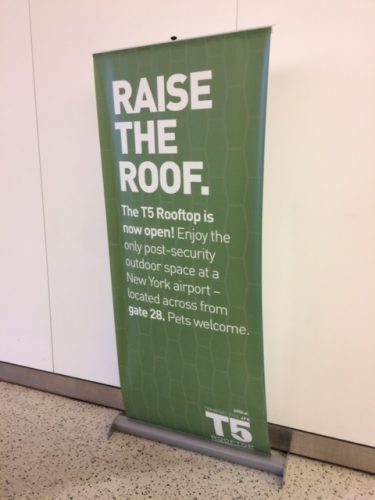 Hat tip to my husband for seeing this sign. I was in full airport trudge mode, and would have missed it completely. “Pets welcome” — what joy! 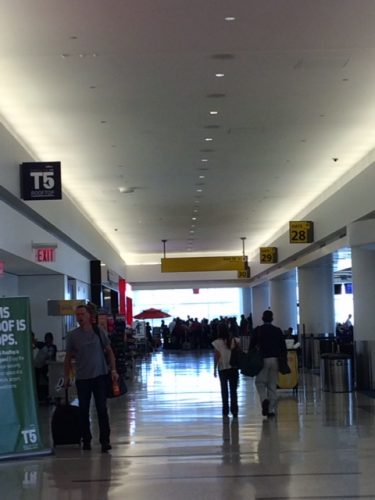 The blurriness of these photos! But you get the idea: The entrance to the T5 Rooftop is across from Gate 28 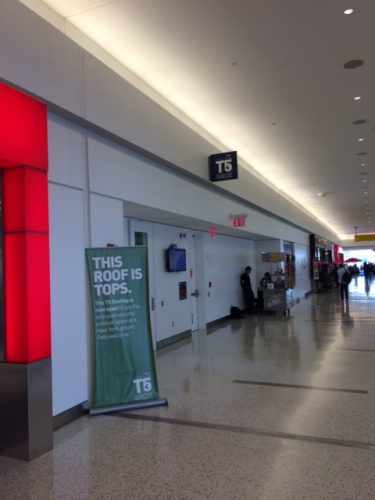 A slightly different sign for the T5 Rooftop, also saying “Pets welcome.” Photo overkill, perhaps, but I just could not believe my eyes. 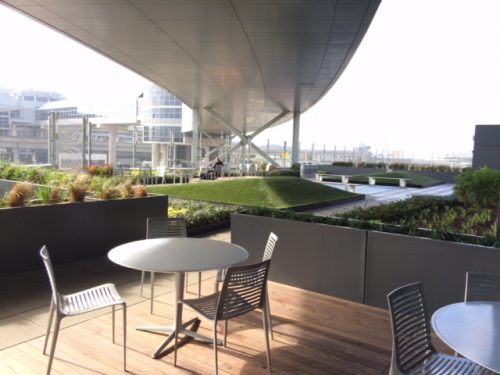 It’s just astonishingly calm and attractive. You actually walk past the pet relief area to reach this point — it’s discreetly tucked in a corner, albeit the corner you face as you walk onto the terrace.

Here’s the pet relief area from the outside, with our carry-ons leaning against the planter: 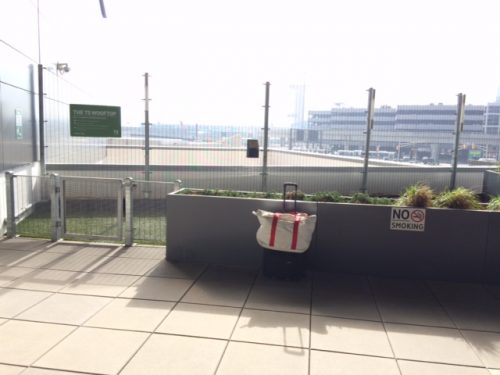 Utter perfection would be a water source, and a bench to rest stuff on while wrangling your pup and her poop bag, but it’s hard to work up a head of steam about those items in the face of this beauty. 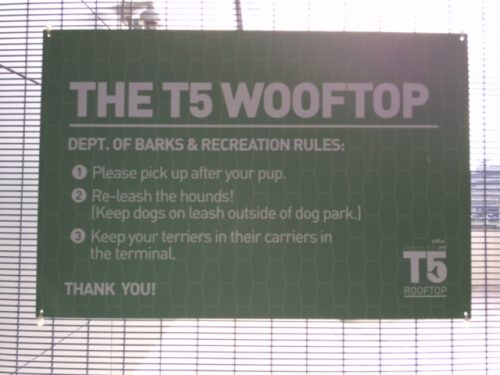 A close-up of the sign on the door. I laughed, I cried, it was better than “Cats.” 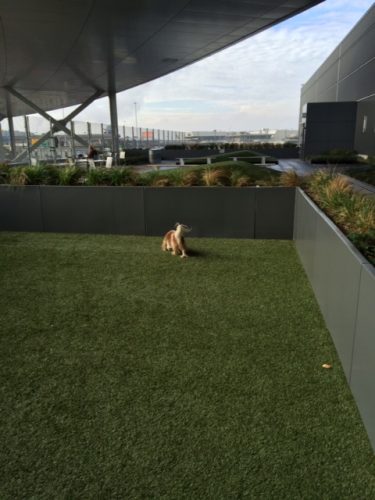 Chloe, accomplishing her goals. It’s a good-sized space, as you can see, and while it abuts the human side of the terrace, the two areas feel very separate. Nice design work, T5 persons. (That’s artificial turf, by the way, which Chloe doesn’t mind a bit.)

You get the idea. I was thrilled, and our future travel plans involving NYC will be weighted heavily towards JetBlue. Those pictures were from November 2015; imagine my joy when we passed through Chicago’s O’Hare airport in March of this year, and learned about the new indoor pet relief area in Terminal 3.

It’s located in “the Rotunda area of Terminal 3,” everyone who writes about it declares, and for us, arriving on United at Terminal 1, it was a heck of a long walk. Here’s a map of O’Hare, and it’s a particularly nice one: Click the “off” button next to “Accessibility” to “on,” and you’ll get directions to the various pet relief areas (enter your arriving gate number, and the map will estimate how long your walk will take).

I hadn’t yet found that map when we arrived in Chicago, so we schlepped from sign to sign, seeking Terminal 3 and, as we neared our goal, the mysterious “Rotunda.” 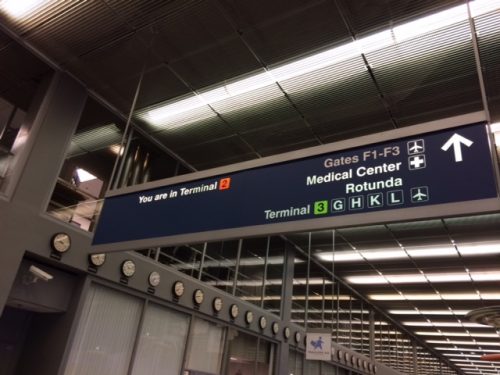 This was the first sign that contained both the words “Terminal 3” and “Rotunda.” We had seen really quite a lot of O’Hare by this time, but our spirits revived and we soldiered on. 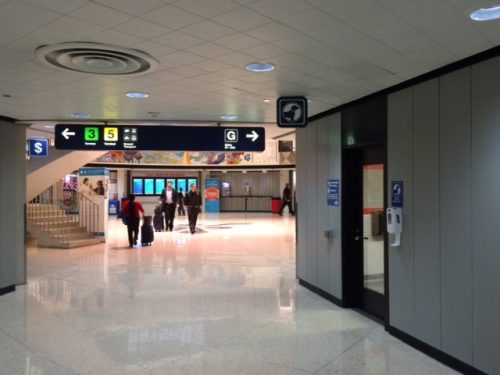 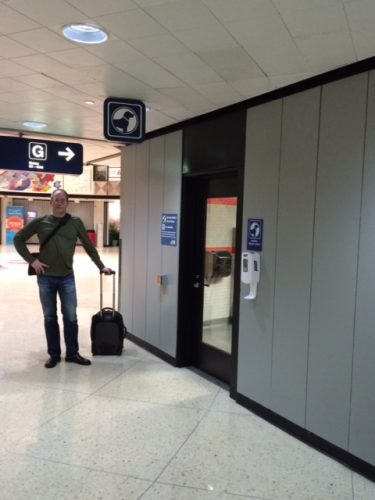 Inside, you’ll find a couple of sinks on the right, and then, beyond, a couple of raised platforms of artificial turf. They are, in fact, two of the deluxe Porch Potty products, so when your pup is finished, you press a button and a couple of sprinkler heads appear and rinse things off. The view into the room through the glass door. The front of the room looks like a normal airport bathroom. Where the stalls would normally be, however, are two Porch Potty ledges, a trash can, and a poop bag dispenser. There is also this magnificent hose object on the wall. I yearned to use it, but we were out of time, and, to be honest, I didn’t fully understand what it was for. Medical emergencies? A quick dog bath? There wasn’t an equally magnificent floor drain, so we decided discretion was the better part of valor, and departed. Chloe in action — or, rather, non-action — looking a bit bewildered. We’d only been traveling for an hour or two, so I suspect she just didn’t need relief. Nevertheless, we pushed the flush button on the wall (you can see them flanking the red hose), to see what would happen. Those two sprinkler heads lift up and sprinkle, is what happens — our first experience of the deluxe Porch Potty, and we were mightily impressed.

The pet relief area was clean and attractive, and I suspect that if Chloe’s need had been urgent, she would have used it. It has a water source, obviously, but I’m not kidding when I say that a bench would have been a welcome addition. This is, after all, a bathroom, and I’m deeply reluctant to put anything on a public bathroom floor. That meant that we had to keep our shoulder bags draped around our top halves while holding Chloe’s carrier off the ground and simultaneously extracting her from it and putting on her leash. It was precarious with two people, and would have been a major pain if I’d been alone. (Rest your gear on the sinks, I can hear you say, and I would, except that these sinks are hands-free, and turn on at the slightest invitation.)

That is, however, my only gripe with this pet relief area, and hopefully it’ll soon be addressed. Blessings on the Chicago Department of Aviation for addressing the needs of the traveling working dog (and also of the traveling pet) and her owner.