Left to my own devices, I would have skipped Tucson’s Saguaro National Park. “Saguaros,” I would have said to myself, “I’ve seen ’em” — and I have, on the drive from Phoenix to Sedona, and lovely they are. Also, I would have added, with Chloe along a national park will be largely off limits. How wrong I would have been! And how lucky I am, in so many ways, that illustrator Chandler O’Leary was guiding the Good Ship Dodge-Chrysler Minivan across the country, and that she is a devoted fan of national parks.

The fact is, there is plenty for a dog of any size to do at the Saguaro National Park, despite the park service’s restrictions, and the place (well, two places, since it’s divided into two districts flanking Tucson) is unbelievably gorgeous. Sure, I’d seen saguaros. I just hadn’t seen as many, nor had I seen them in a terrain that highlights their beauty to advantage — and whizzing by a landscape at highway speeds is a whole different experience than ambling past and through a saguaro forest. I’m a girl who really prefers an urban getaway, and I was dumbfounded. 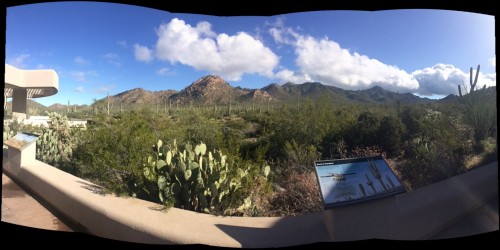 This is the view from the visitor’s center for the western district. I mean…the park hasn’t even really STARTED yet, at this point, and it’s already just…wow.

We started with the eastern Rincon Mountain District, since we arrived in Tucson from the east. The entrance fee (and it covered the other district, too) was $10, since we had the car (and you’d want one — it’s a big place and even the nearest picnic area is over a mile from the main parking lot). We were advised by the park rangers (who greeted Chloe with joy and treats) that Chloe could walk on the pavement, at the picnic areas, in the pull-outs along the road, and along the Desert Ecology Trail (a paved, relatively short loop of a trail).

That might sound, at first glance, like limited access, but it’s really all an average visitor like me needs, with or without a dog. The Ecology Trail sends you in among the saguaros, but you can also choose, as we did, to drive very slowly around the one-way circuit, pulling over from time to time to let faster sightseers go by. There are enough pull-outs that you can easily stop to take pictures, and take your dog for a walk down the road and back before continuing.  The park’s website makes even that easier, suggesting, for example: “On the paved scenic road, try the stretch from North Cactus Forest trailhead to Loma Verde trailhead. This route is less strenuous and has good sight distances for the safety of you and cyclist / motorists.” 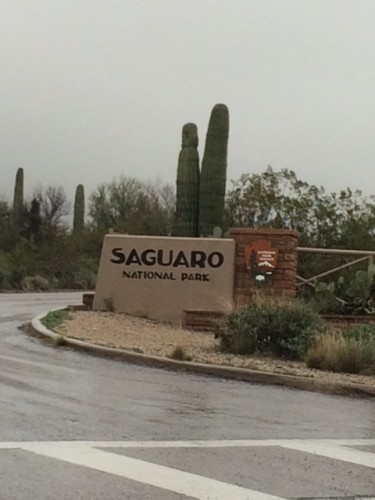 But gorgeous nevertheless, right? And this was a photo taken on my phone, from the driver’s seat. Chandler was creating ART from her seat, with her camera.

The site has similar suggestions for the western Tucson Mountain District, which also has a small dog-friendly trail taking you in among the saguaros (this one is called the Desert Discovery Trail). There too, dogs are allowed on the pavement, in three of the four picnic areas, and in the pull-outs. Both districts are well worth visiting, and the drive between the two along Speedway (which turns into Gates Pass Road) is very beautiful.

Some important considerations: Bring water bottles, wear sunscreen, and consider a Chilly Buddy jacket for your dog. On a sunny day in early March I found myself attempting to tuck my entire body under my wide-brimmed hat, and it will only get hotter as the year progresses. Also consider booties for your dog: Even on the paved surfaces Chloe was restricted to, she picked up and suffered from various burrs/prickles. Which leads me directly to one of the park’s rules: Dogs are to be leashed, and on short (no more than 6′) leads. That may sound unsporting, but you’ll soon agree it’s a good idea. The local wildlife includes rattlesnakes, scorpions, and, I kid you not, Gila monsters, and off the paved paths, the burrs/prickles proliferate. In fact, one of the rangers demonstrated that some of the flora is actively dangerous to dogs — in this picture, she’s showing how segments of some of the cholla plants (in this case, Jumping Cholla or Chainfruit Cholla) break off when you brush against them and embed themselves in your leather boot, or your dog:

Please note that she is wearing a really serious pair of leather boots, and yet the cholla thorns dug deep — she had to scrape hard on the sidewalk to get the cholla segment off (she didn’t happen to have a comb in her pocket).

The solution, she told me, is not to grab the segment with your hand but rather to comb it off your dog with a regular hair comb. So pack a comb, and keep your pup on a short leash. That cholla is everywhere. And, of course, bag your dog’s poop and pack it out of the park. There are trash cans in the picnic areas and the main parking lot. 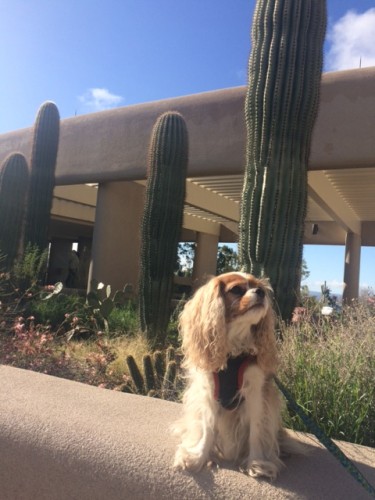 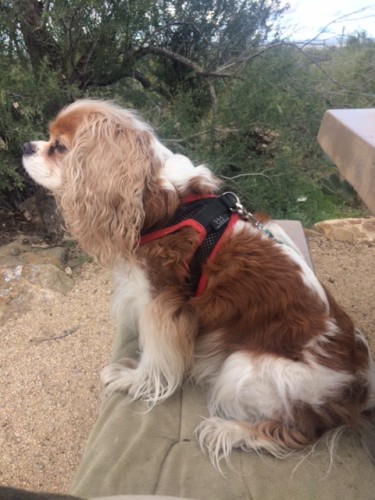 And looking for squirrels at the Signal Hill picnic area

In total, we spent about four hours at the park, and could easily have stayed longer (we should, for example, have brought in lunch). Chloe was interested in and enthused with what she saw, and then ready to snooze through the rest.