Reader Shaye wrote to me last year — oh, you know the sad story of my in-box by now — and sent me this glorious shot of Whiskey (see what I did there?), her tricolor Cavalier King Charles Spaniel, running alongside a Florida canal. 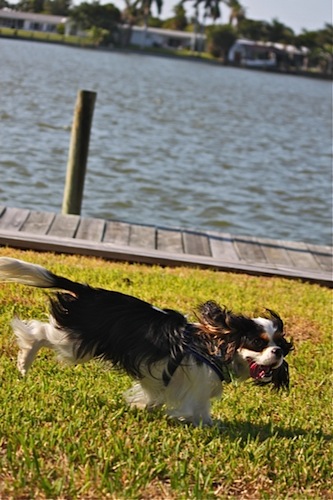 What she didn’t send was a picture of Whiskey on Amelia Island, where she’d just spent a week, because she’d gone to the island thinking it wouldn’t be dog-friendly. Here’s her report:

“I just finished spending a week at Amelia Island right on the northeastern tip of Florida. This little island is a beach-lover’s paradise and has some of the most wonderful examples of late 1800’s architecture in the state.

When it was suggested I should visit Amelia Island, I asked about the city’s dog policies and whether it would be possible to bring my Cavalier. The person I spoke with was unfamiliar with whether dogs were allowed on the beaches, in the hotels, or in the local shops on the main street. Because of this, I chose to leave Whiskey with his dog buddy Jack.

After arriving, I headed out to Fernandina Beach and was surprised to see at least three dogs (all on leashes) walking in the surf, catching balls, or sitting next to their owners watching the gulls. 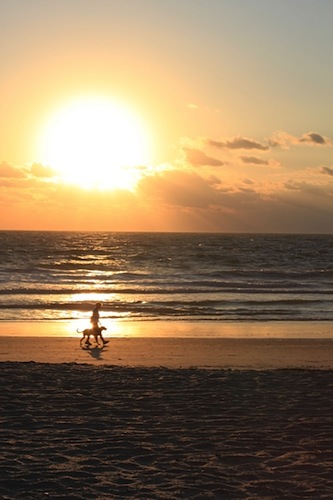 One of Shaye's beach photos from Amelia

It turned out that the island was incredibly dog friendly. Over the course of several days I saw dogs welcomed into shops with treats, dogs taking in the sights on a carriage ride, a cute Bichon eating a late dessert on the patio of a bistro, and countless dogs taking walks in the morning and evening up and down the beach. Each time I drove to the little downtown area it was clear that people loved dogs of all sizes. However, some of the shops with more delicate items (antiques) may ask for the dogs to wait outside. I did take a sunset boat tour and it appears that dogs are allowed at no additional charge.

This little town is charming and all the more beautiful for the way it seems to embrace dog owners.

As for where you can stay with your dogs, the hotel I was at did not accept them. However, I did stop a couple with a Briard about where they were staying. Apparently, some of the small beach cottages—right on the shore—do accept dogs with a reasonable deposit. In their case it was $50.”

My mother-in-law is passionate about Amelia Island, so it’s on our list of places to go. I’d look for the pet-friendly beach cottages Shaye mentioned (here’s an adorable one from vrbo.com), but I’d also be drawn to The Hoyt House, a B&B which accepts pets (though a damage waiver is required) and looks lovely. The sunset cruise I found on-line is run by Amelia River Cruises and is pet-friendly.

Thanks so much for your message, Shaye! I like the idea of you and Whiskey going back to Amelia (and I really like the idea of us going there with Chloe). I should apologize again for my delay in posting your report, but the fact is that a Florida vacation sounds even better now, on a grey day in Seattle, than it did back in October….