Before the memory dims too much, I want to tell you about our morning in Brooklyn’s Prospect Park. Designed by the same landscape architects responsible for Central Park, Prospect Park occupies a huge, 585-acre chunk of Brooklyn (Central Park, if you’re wondering, is 843 acres). When we went there, midmorning during the week, it was uncrowded and tranquil. Chloe, who loves Central Park, was in heaven here. 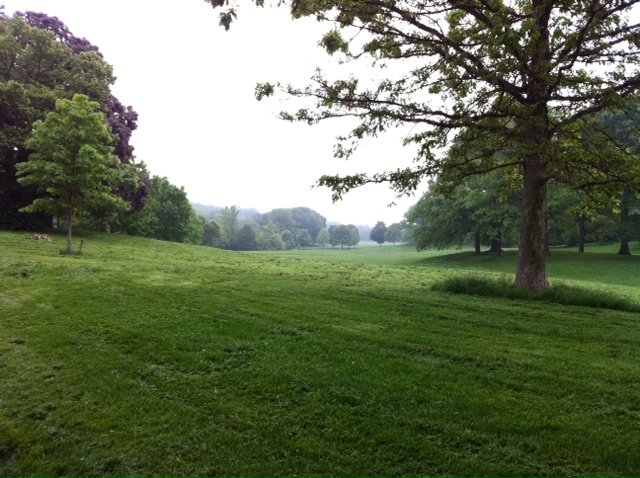 It was also remarkably well-signed. How grateful I am for park managers who make the details clear for visitors with dogs! We entered the park from the Grand Army Plaza, at its north end, and were greeted with a park map that proposed a choice of colored trails to follow (here’s the online, PDF version). Because our time was limited, we opted to follow the green trail to the Picnic House, then turn left onto the blue trail and follow it out of the park. Even that walk, however, took us about 45 minutes.

We missed vast swaths of the park, of course, but the parts we saw were beautiful, and more of them than I could have imagined were dog-friendly. According to the park’s website, leashed dogs are allowed pretty much everywhere you can go, except for playgrounds, sports fields and the bridle paths, and there are generous off-leash areas (though you need to get up early or stay up late to use them). There are two places for dogs to swim in the park: the “Long Meadow Dog Beach at the Pools,” and “the water at the Lake adjacent to the Peninsula meadow” (but only during off-leash hours).

Another sign listed the rules (the bridle paths, by the way, are marked with gray dotted lines on the PDF park map — if you choose to follow one of the colored trails, you will not end up on them): 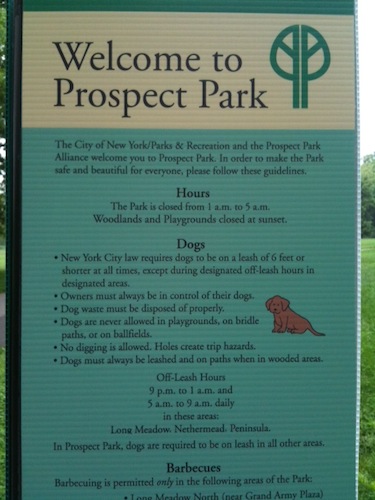 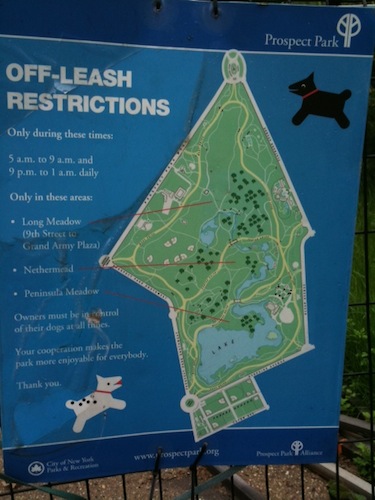 The only thing these signs don’t include is the location of “the Long Meadow Dog Beach at the Pools.” It is on the website’s park map, however — to find it, click on the PDF I provided, and look just below the first “O” in “Long Meadow.”

Please note that pet dogs are not allowed in the Prospect Park Zoo, nor are they allowed in the Brooklyn Botanic Garden, which together occupy the northeast side of the park.