This is a guest post from Portland-based travel writer Jessica Spiegel. Jessica is the Italy travel expert at BootsnAll, the RTW travel resource, but she’ll gush just as much about Portland as she will about Italy — especially when it comes to the food.

Portland is the kind of city that doesn’t really attract vacationers. The people who come here from out of town are, more often than not, scouting it out as a place to live. And who could blame them? Even pre-Portlandia, this city was well-known for its easygoing attitude and quirky sensibilities – but Portland has been on the proverbial map even longer as a food city, which is something locals and visitors alike can get behind.

Of particular note in recent years is the Portland food cart scene. We love food carts here, and the variety of cuisines available from carts is staggering. It’s impossible to keep up with the number of carts in Portland, but it’s safe to say there are well over 500 (it’s probably closer to 700 by now) scattered throughout the city. Food cart dining is a must when in Portland, and it’s especially appealing if you’re traveling with a pooch – being able to have a fantastic restaurant-quality meal outdoors so Fido can come, too? Priceless.

In Portland parlance, these mobile food portals are “carts,” not “trucks” (even though some of them are technically trucks, most are not), and groupings of carts are called “pods.” Unlike in some cities where food trucks really are mobile and you never know where they’ll be on a given day, the vast majority of Portland’s food carts are stationary. Think of the food cart pods the same way you’d think of a food court in a mall (only with better food) – within a few steps you’ve got several different dining options. 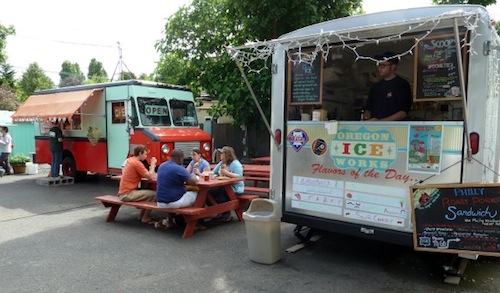 Not all food cart pods are the same, however. Some are more geared toward a workday lunchtime crowd – these pods are rarely open in the evenings or on weekends, and almost never have more than one or two chairs (at most) out front. The expectation is people will get their lunch and take it back to their desk to eat, like all good Americans do. Other pods, the ones we’ll focus on for the rest of this post, are the kinds that seem to invite diners to stop and stay awhile. These pods are often open into the evenings and on weekends, and – this is the important bit – they have communal seating.

Here are but a few of the Portland pods that encourage lingering for you and your furry pals.

Note – A good resource to find out more about the always-changing food cart scene in Portland is the Food Carts Portland site.

Cartopia is one of the best-known pods in Portland, and one of the oldest. Carts here include Pyro Pizza, Potato Champion, Perierra Creperie, and Whiffie’s Fried Pies. There’s a central seating area with several picnic tables under a tent roof. No matter how tempting the big empty parking lot across 12th from Cartopia looks, don’t park there – they tow cars within nanoseconds.

On the corner of NE Mississippi & Skidmore there’s a German pub called Prost that feels like part of the food cart pod behind it – because it sort of is. The Mississippi Marketplace pod occupies the parking lot behind the pub, and Prost’s big back deck is more or less considered part of the pod’s seating area – to sit up there, you need to be a Prost customer, but you can bring in food from the carts. Food cart grub plus German beer – not bad. If that’s not appealing, however, the pods have their own tent-roofed seating area, so you can sit outside without having to go into Prost at all. Carts here include Burgatroyd, Garden State, The Big Egg, Big Top Waffles, Sushi Tree, and Dogfeather’s (!!).

Like the Mississippi Marketplace, the North Station pod enjoys the benefits of a brick-and-mortar restaurant that has a collection of food carts in its parking lot instead of cars. What’s more, the restaurant – Pizza Depokos – has rolling garage-style doors on one side of its very informal seating area, and more often than not those doors are open and pod customers are welcome to sit inside. In the middle of the pods there are also a few picnic tables, some of which have tent-roof coverings. Carts here include Brother Bob’s Roving Bakery, PDX671, The Mobile Chef BBQ, El Rancho Taqueria, Istanbul Delight, and Scoop Organic Ice Cream.

If you don’t count the proximity of Prost to Mississippi Marketplace, the D-Street Noshery is the only food cart pod in Portland where liquor is allowed (at least so far) – and of course it’s in the form of a “beer bus.” This pod is directly across the street from one of Portland’s best-known restaurants, Pok Pok, which is known for its long waits (sometimes 45 minutes to an hour, even on weekdays). Carts here include The Pie Spot, KOi Fusion, Slice Brick Oven Pizza, Herb’s Mac & Cheese, Awesome Cone, and the Captured by Porches beer bus. (On a recent visit to D-Street, there was a resident beagle wandering around. He was so comfortable there, he must belong to one of the food cart owners. Just note that there may already be a pooch on the premises, and not on a leash.) 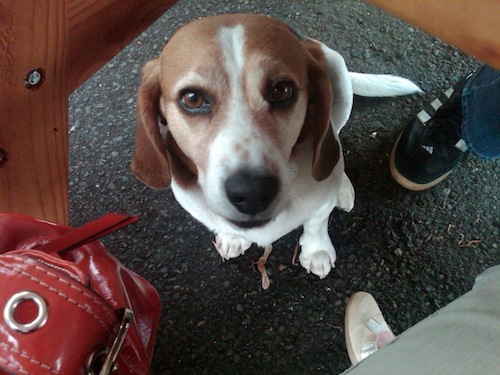 The D-Street Beagle, giving you the big eyes

Further up SE Division is one of the newer (at least for now) food cart pods in Portland, A La Carts, which has lots of covered seating in the middle of the lot. There’s live music every other Saturday at this pod, and plans to start up movie nights, too. Carts include VanSchnitzels, Jazzy’s Old-Fashioned Barbeque, Chicken Run, Shut Up and Eat, fon-due-it, OmNomNom Sandwiches, and We Be Weiners. As an added bonus for your four-legged friend, the nearby Mt. Tabor Park is a dog-friendly Portland park, with a fenced off-leash area (near Harrison & Lincoln streets, at around 64th Ave). (Also note that there’s another smaller pod on SE Division at about 48th, called D-48.)

As the food cart craze develops, more pods are actually planned from the start rather than happening organically. Good Food Here is one of those planned pods, and it’s huge – 17 carts in all, at least as of this minute, so there’s no excuse for leaving hungry. Seating is scattered, with picnic tables here and there throughout the lot, some with small-ish umbrellas and some under the awnings of adjacent carts. Carts here include Lardo, Da-Pressed Coffee, Namu, The Sugar Cube, EuroTrash, Kitchen Dances, Urban Garlic, Yum Zap, Rockabillies, 50 Licks, Nusha’s, Sweet Pea’s Brulee, and Las Loncheritas.

>> Come visit. You know you want to. Look for cheap flights to Portland.