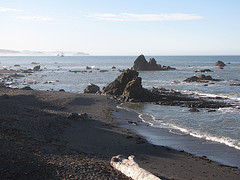 Here’s a link that should have been in yesterday’s Chloe’s Clicks: The Oregon Parks & Recreation Department’s post (“Let your dog sniff where lilies thrived“) about the new off-leash dog area at McVay Rock State Recreation Site, a park on the Oregon coast halfway between Brookings and the California border. I’m glad, now, that I forgot it, because it’s worth a post of its own. The OPRD makes it blessedly easy for dog owners to find out which of its parks have off-leash areas (please note that the list has been updated to include the McVay Rock park — that’s the kind of timeliness and attention to detail that makes me weep with happiness), and to learn what the rules are for visiting Oregon’s state parks with a dog.

While you’re looking at that second link (the “Pets in the Parks” brochure), please note that although “animals are not allowed in most park buildings or structures,” there are a few exceptions:

Exceptions include a yurt at South Beach State Park, a cabin at Stub Stewart State Park, and two cabins at LaPine State Park. On a trial basis, a limit of two pets (defined as dogs and cats) is allowed in each of those structures for an add-on fee of $10 per night. The trial period may end without notice. You must call 1-800-452-5687 to make reservations.

South Beach State Park is on the central coast, just south of Newport. Stub Stewart State Park is about 30 miles west of Portland. LaPine State Park is in the Cascades, about 30 miles southwest of Bend. The pages for these parks indicate that the pilot project making some accommodations pet-friendly is still active — if you and your dog stay at one of these parks, please write to me and tell me about your visit! [4/3/11 I should add that, as I mentioned in today’s Chloe’s Clicks, that I got an e-mail from Beth Wilson at Oregon Parks and Recreation telling me that Oregon has expanded the program considerably: Now, the roster of dog-friendly lodgings includes “13 cabins and 20 yurts in 21 Oregon state parks. Reservations open[ed] April 1, 2011 (no April Fools’ joke) for stays beginning Jan. 1, 2012.” The options I mentioned in this post are still available in the meantime.]