This is a guest post from Roxanne Hawn, a freelance writer and author of the wonderful blog Champion of My Heart. Roxanne and her husband share their home with Lilly, a smooth-coated Border Collie, and Ginko, a Lab-Greyhound mix. I asked Roxanne to write this post after I saw a tweet she’d written about the rattlesnake encounter she describes. Rattlesnake country is also, often, gorgeous hiking country — Roxanne’s post is important reading for hikers with (or without!) dogs.

When we moved to a high mountain valley in the Rocky Mountains of Colorado, people told us there were not rattlesnakes at this altitude (about 8,500 feet above sea level). People are wrong. Of four known rattlesnake encounters on our own property, two resulted in bites to Lilly’s face. Our snake-to-bite ratio would have hit 75% if my elder dog (Ginko) didn’t have such natural snake aversion. 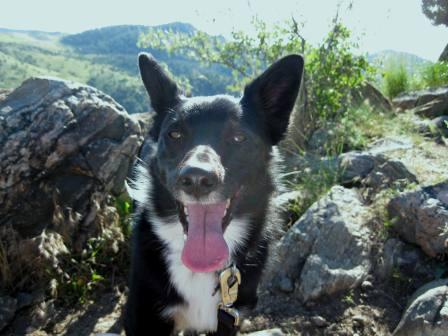 Not long ago, only a few weeks after Lilly’s second rattlesnake bite in two years, we had another snake right behind the house. When Ginko barked in an odd way, I stepped outside and heard what sounded like a swarm of cicadas buzzing. The sound echoed off the back of the house. It reverberated off the hill behind us. It seemed to come from everywhere at once. Then, I saw Lilly squared off with a coiled, rattling snake. She stood well within striking distance.

After stuffing Ginko through the back door and screaming “Snake!” at my husband, I used “out,” an agility cue meaning move out and away, then I ran like mad for the other end of the deck – in a sort of run-away recall.

It worked. Lilly moved away from the snake, without either of us being struck. Still, I checked both dogs every hour on the hour, looking for pain and swelling. Everyone was fine…this time.

I recently researched and wrote an article for a national dog magazine about dogs and rattlesnakes, and I had the sad duty of interviewing someone whose dog did not survive his one and only rattlesnake bite. That sobering conversation and everything I learned about how rattlesnake venom destroys dogs from the inside out only reinforced how lucky I feel that Lilly has now survived two bites.

I like to think I could protect Lilly when we’re hiking because she is always on leash. I know others love to let their dogs run, but there is just too much dangerous wildlife in our area for me to feel OK with Lilly getting too far afield. We see snakes often on our hikes, and we’ve never had a problem.

Sadly, the dog who died WAS on leash. So, there goes my theory on that. 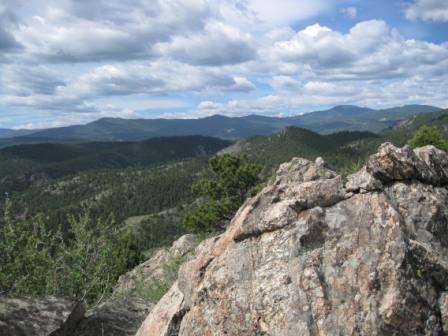 You’ll find rattlesnakes of various kinds across North America, with some more poisonous than others. The Eastern Diamondback, the Western Diamondback, and the Mohave Rattlers, for example, carry large amounts of super-toxic poison. The ones we have here — Prairie Rattlers — are weak venom-wise, but still a danger. Dogs in Colorado die all the time from snakebites.

Most dog-snake encounters happen by accident. Our dogs stumble upon them. The snake gets freaked out, and dogs – who explore the world with their noses and mouths – get right in there to take a better look. Even the most patient snake won’t take kindly to snuffling or barking for too long before it bites.

Like all snakes, rattlesnakes can literally taste the air with their tongues, so when they flip that forked tongue out there then put it against the roof of their mouths, they’re sampling molecules from the air.

As pit vipers, rattlesnakes have an extra sensory organ that helps them “see” other creatures. It senses heat so that it can tell a rock from a mouse. It also gives them a decent enough “picture” to know big mammal from a small one.

These snakes also can feel vibration from the ground through their whole bodies, so very often they feel us coming. (They do not have ears, so they cannot hear us or the barking, but they feel the vibration instead.)

It’s important to know that there are many myths about rattlesnakes. For example, NOT all of them rattle, and even with those that do … you cannot expect they will always rattle before striking.

And, rattlesnake CAN bite from a flat position, so a rattlesnake need not be coiled up to sneak in a bite. That means if your dog steps on a snake or is standing next to a snake, it can still get bitten on the foot or something.