My mother-in-law just set off with a friend on a jaunt through Montana, stopping at Lake McDonald Lodge, Many Glacier Hotel, and Glacier Park Lodge; they’re also taking a side trip to the Prince of Wales Hotel in Alberta. I’m not normally a gal for the wide open spaces, so I had never heard of those places before.

All of that has changed in a hurry, since my mother-in-law left behind Christine Barnes’ Great Lodges of the West, which describes the history, architecture and setting of twelve of the most stunning buildings I’ve ever seen. I sucked it down in gulps, and now I’m desperate to see the lodges for myself (and, yes, their surroundings too). I have been to the Ahwanee (in Yosemite) and to El Tovar (at the Grand Canyon), and I knew from past research that neither welcomes dogs. I hoped that at least one of the other ten hotels highlighted in Barnes’ book would be pet-friendly — but no. I’ve sorrowfully updated Dog Jaunt’s “No Dogs Allowed” list, and I’ve looked for alternatives.

My goal? To find architecturally-significant park lodges, built at the beginning of the 20th century to cater to tourists discovering the natural beauty of the West, that are dog-friendly.

In the Pacific Northwest, both Mt. Rainier’s Paradise Inn and Mt. Hood’s Timberline Lodge are off-limits to dogs, but the Olympic National Forest, on Washington’s Olympic Peninsula, has two early 20th-century lodges that welcome pet dogs. Lake Quinault Lodge, built in 1926, allows dogs to stay in its Boat House Rooms; Lake Crescent Lodge, built in 1916, opens its cottages to travelers with pets. 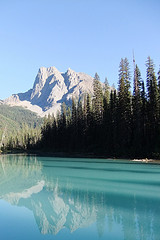 View of Emerald Lake from the lodge (photo by HandsLive)

On the Canadian side of the border, you have some really wonderful options. The Banff Springs Hotel and the Chateau Lake Louise, both in Alberta’s Banff National Park, are world-famous, and for good reason. Both are elegant creations of the early 20th century, and both are surrounded by spectacular scenery. And both hotels, like so many in the Fairmont hotel group, are pet-friendly. The Chateau Lake Louise, in fact, provides visiting dogs with a bundle of goodies and a special welcome from Sonny the yellow Lab, resident Director of Pet Relations.

The Jasper Park Lodge, another Fairmont property, has early roots (the original main building was built in 1922) but large pieces of it have been destroyed by fire and replaced. The current structures don’t have vintage charm (except for the carefully-restored Outlook Cabin, and some surviving original cabins), but the hotel’s setting on Lac Beauvert in Alberta’s Jasper National Park is stunning. The Lodge, like its sister properties, is dog-friendly.

The main building at the heart of Emerald Lake Lodge, located in British Columbia’s Yoho National Park, was built in 1902. The cabins are newer, but complement the historical lodge and suit their setting on the shores of Emerald Lake. Some of the rooms are pet-friendly. People rave about this place, saying it’s as beautiful as the Fairmont properties I’ve mentioned, but much less crowded.

Have I missed your favorite dog-friendly historic park lodge? Please let me know in a comment — I’d love to hear about it!