There are three Shake Shacks in New York City (two more are about to open), and a new one in Miami, but the original Shake Shack was — and still is — a walk-up stand in Madison Square. We went there a few nights ago, after a day of cruel and unusual heat, for an al fresco dinner with Chloe. We arrived at about 8:30 pm and added ourselves to the end of a long line (maybe 170 people ahead of us? long, I tell you). Although it moved slowly, we didn’t mind. The day’s heat mellowed into a mild evening, there was darned good live music coming from another corner of the park, and the people-watching was first-rate. 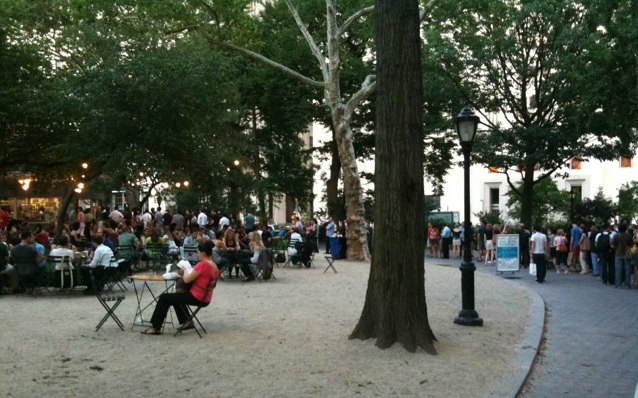 The Shack in the distance

And the payoff, of course, was a really outstanding Shack Burger, seriously good crinkly fries, and what I know from other visits to be a divine vanilla shake (my husband chose caramel), except that I waited to drink it until last and it had mostly melted. But believe me, the Shake Shack shake is a thing of beauty. Please note that there are plenty of non-burger options, and the menu (PDF) even includes The Pooch-ini, a chilly treat for dogs. (Chloe did not have one. It’s about as big as she is, and last week she had some sort of GI meltdown that had us feeding her, essentially, Saltines. We feared the consequences.) 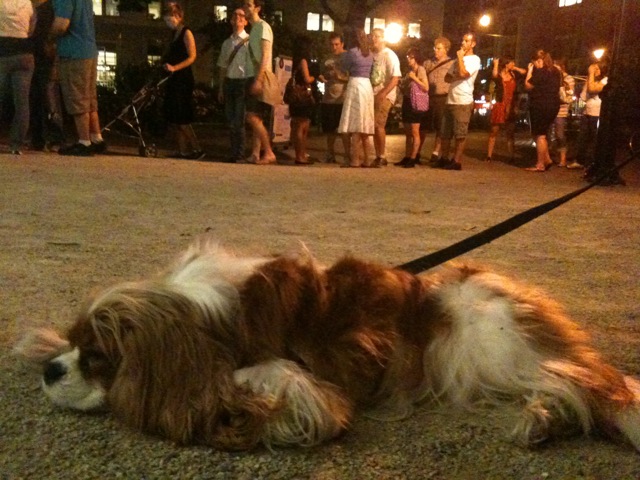 Chloe snoozed while we ate (yep, night had fallen by the time we got our food). Note that the line is still there. When we left at about 10:30, it wasn't much shorter than when we arrived. 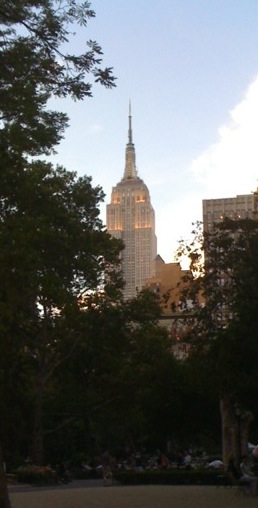 There were fireflies — the first we’ve seen this year. There was a view of the Empire State Building, black-tie elegant in its nighttime lighting. There was, at the very top of the 304 Park building, a startling statue (alas, temporary) of a human figure silhouetted against the sky (thinking of jumping? watching us? simply looking out over the other rooftops?). It was a fine night.

Tip we picked up from the couple ahead of us: If there are two of you waiting, send one of you through the very short B-Line (drinks and shakes only) for a beer to sip while you’re waiting in the main line for food.