Traveling from Seattle to Tampa recently, Chloe and I occupied the same seat (8F) on two different Boeing 737-800/900 series planes. Please note that that’s an Economy Plus seat — while the under-seat spaces are the same throughout the Coach section, Economy Plus gives you a few more inches of pitch, so you can reach down to your pet more easily. If your budget allows it, it makes a world of difference.

Here’s a seat map from SeatGuru so you can follow along (there are several configurations for the kind of plane I was on, but only this one has a bathroom right across from Aisle 7). On this plane, all three Coach section seats will work for folks with a pet carrier (assuming you orient it front-to-back, not left-to-right), but I think the window seat is most desirable.

All three spaces are about 9″ high at their lowest, where the life jacket packet is. There is a little give there (say a half inch to an inch), because the life vest container is soft. It’s located about 8″ forward of the plane of the seat pocket, so Chloe’s large SturdiBag, with its rounded top, would have missed it altogether had I oriented her left-to-right (I don’t, these days, though I used to — nowadays, I orient her front-to-back, so she can see me out the front “door” of her carrier, and I can reach down to her through the SturdiBag’s top hatch). Where the life jacket container isn’t, the under-seat space is about 11″ high.

Here’s Chloe, waiting to take off on our flight from Seattle to Houston: 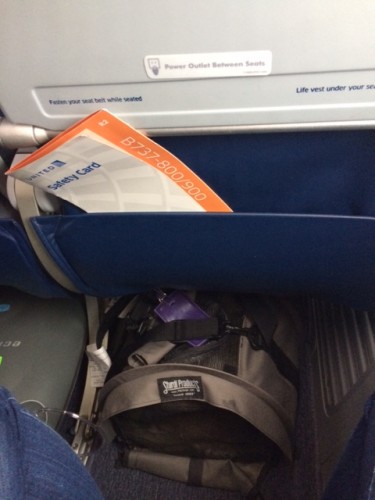