Over the past week, we’ve taken several ferry rides on B.C. Ferries, ranging from a quick hop on the tiny Skeena Queen (connecting Fulford Harbor, on Salt Spring Island, with Swartz Bay) to a long chug on the Spirit of Vancouver Island (one of the massive ferries connecting Swartz Bay and Tsawwassen). Pet dogs are allowed on board, though not above the car decks. The B.C. Ferries web site is austerely brief on the topic: “Pets must remain on vehicle decks for the duration of a voyage.” When you’re on board, that message is reinforced by signs: 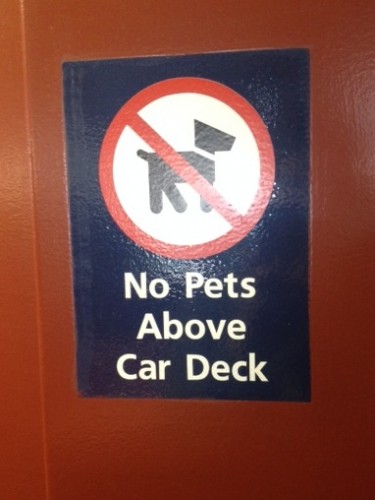 I was profoundly interested, therefore, when my husband returned to the car from a foraging expedition and reported that he’d seen a “Pets Area” on our deck. I couldn’t find any reference to pet areas on the B.C. Ferries web site, but here’s proof that they exist: 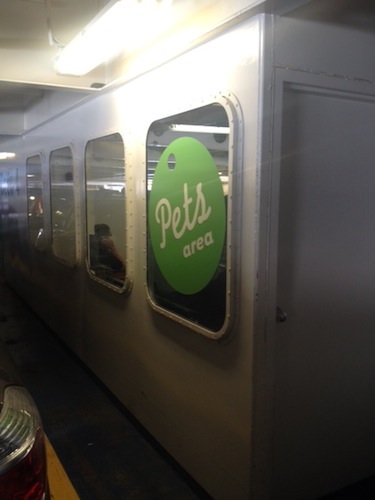 The “pets area” on the Spirit of Vancouver Island, a boat so huge that I simply don’t know which car deck we were on — I suggest asking an employee (they wear bright safety vests) for the location 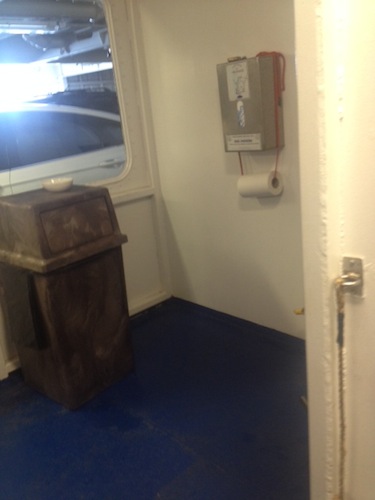 The room is very basic, as you can see. To my left were a couple of long benches (not pictured, because I didn’t want to invade the privacy of the three pet owners installed on them)

I called the main number for B.C. Ferries and the customer service rep I spoke to told me that the facilities for foot passengers traveling with pets vary by boat. The two big Spirit boats (the Vancouver Island that we traveled on and the Spirit of British Columbia) have “lightly-heated” rooms like this one, as do the three Coastal behemoths (Coastal Celebration, Coastal Inspiration, Coastal Renaissance).

At the other end of the scale, small vessels like the Mayne Queen and the Queen of Cumberland (and the Skeena Queen) have no facilities, or perhaps only a bench. Stacking chairs are on order for the Mayne Queen, I’m told.

How about the mid-sized vessels, like the Queen of Surrey, or the Queen of Nanaimo? Again, the facilities vary by vessel. The Nanaimo currently just has “benches” for travelers with dogs, but the Surrey has a “segregated pet area” (which sounds like something less than a room and more like an open area in the middle of a car deck) with “padded benches” and a heater. The thing to do is ask an employee as you get on board if there’s a place for you and your pup that’s out of the wind (my customer service rep told me that the staff typically volunteers the info, when they see someone walking on board with a dog). Also, be sure to equip yourself and your pup with warm clothing and/or a blanket, so you’re prepared for a just-a-bench situation (or for a heater that’s gone on the fritz).

The room I visited was fairly small, but it had lots of windows (the views were of the car deck, granted, but that’s still better than no windows at all). It was equipped with poop bags, trash can, basic cleaning supplies, and a water bowl. There were two benches running the length of the room and facing each other (I failed to notice whether they were padded or not). The three owners I met had, between them, four large dogs. One owner was reading, a couple were chatting, and the dogs all seemed content.

Drivers with a pet dog, like us, will be more comfortable in their cars. Here’s Chloe, snoozing her way to Salt Spring Island from Tsawwassen: 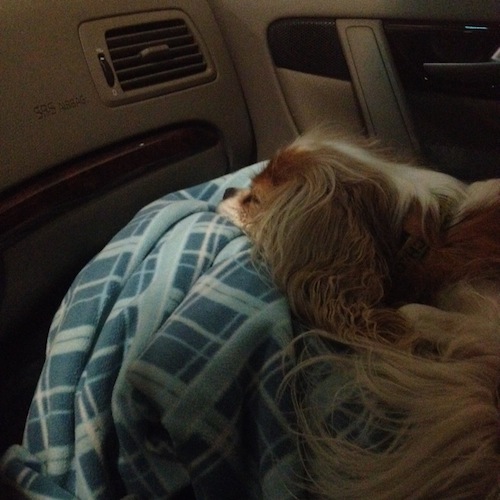 Remember to pack some throw blankets (even in a closed car, and even in warm weather, it can get cold on the ferry) and pillows

Be warned: On that particular ferry, there was no way to see out from the car deck. For someone accustomed to the open-sided boats of the Washington state ferry system, this view was a grim surprise:

It was bad enough not be be able to see out the sides, and then they closed doors across the fore and aft openings too….

Bring a Kindle or other backlit e-reader (there’s not enough light to read a regular book or do crafts, alas), watch a movie, or take a nap, and hope that your subsequent boats will have views more like this: 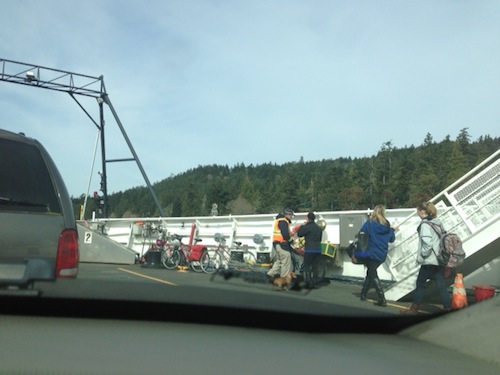 We’re parked on the open deck of the little ferry from Salt Spring Island to Swartz Bay. The pictured pup and his owner walked up the stairs to the right and spent the trip on an outdoor bench, I think, on a kind of mezzanine deck above the car deck.

I was relieved to find that the Spirit of Vancouver Island, which took us from Swartz Bay back to Tsawwassen, had open sides, so the quality of the car deck experience must also vary by boat. There is wifi in five of the B.C. Ferries terminals (I can report that the Swartz Bay wifi does not reach as far as the parking lot), and on some “select” vessels accessing those terminals (none of our boats was sufficiently select, or perhaps it’s the case that the wifi signal doesn’t reach the car decks).