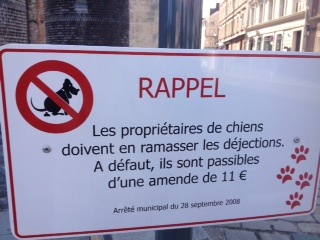 Sabine pooh-poohs (ha! see what I did there? and I didn’t even realize it until it was typed) the threatened 11 € fine: “not so expensive because in Paris it´s 183 euros”

Bernay is in the Eure, not far southwest of Rouen, and it sounds lovely — Sabine was delighted by all the medieval buildings in the center of town. I, personally, am delighted to see that the same portly hound who appeared in a scoop law sign sent earlier this year from southern France by reader Joan is also pooping in northern France. How much more character he has than the schematic dogs I see most often on U.S. signs….

I also remain delighted by the word “déjections.”

Thank you again, Sabine and Zadig! I’m adding this post too to Dog Jaunt’s scoop law sign collection — to see others, click on the “scoop law” tag below this post, or type “scoop law” in the search bone. When Sabine is not catering to my odd whims, she writes a great blog about living (particularly including eating out) and sightseeing in France with Zadig.