You’ll know best what your diabetic dog can handle, and whether he would enjoy traveling. If you think he might like to take a road trip with you, the logistics of caring for him needn’t stop you, as I’ve learned from this guest post written by Natalie Karst.

When not tending to a dog, Natalie is a freelance publication assistant in Northern California. Chris, who was diagnosed with diabetes in 2003 and passed away in 2008, was a local ambassador for dogs with diabetes and the inspiration for Natalie’s website and forum, K9diabetes.com. 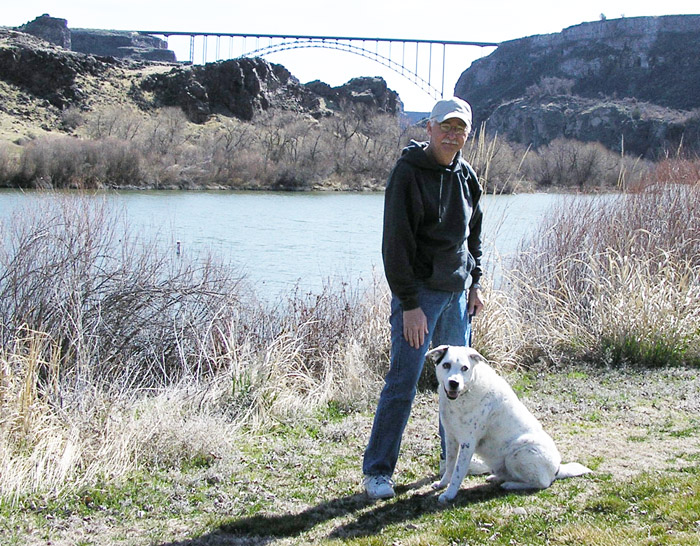 The first thing that came to my mind when asked about traveling with a diabetic dog was that it would work better if the people involved didn’t need to bring any luggage! Or had a bigger vehicle than we did when we traveled 1,200 miles from California to Montana to attend my father’s funeral. We had long ago promised our dog Chris that we would never ever leave him home with a pet sitter again and his unusual regimen of four insulin injections a day, every six hours, meant it was practically impossible even if we hadn’t promised. So we packed up his stuff—he had a lot of stuff—and tucked in as much of ours as would fit and hit the road.

Chris at the time was 12 and about halfway through his 5 years as a diabetic. He had been blind for almost 2 years by then (thanks to diabetes-induced cataracts) so he was used to navigating in foreign places. He knew we would guide him around obstacles outdoors and was willing to find his way around indoors.

Chris’ luggage consisted of an ice chest for his insulin and food and two containers for all of his other supplies. Insulin being a delicate substance, we put the box containing his insulin in a heavy-duty plastic food container with a watertight seal and then put that inside a sealed plastic bag and always kept it above the level of any ice or water in the cooler so it stayed cool, but not cold, and dry.

One of the containers for his other supplies was a freestanding Sterilite plastic drawer, which not only gave us easy access at roadside stops but functioned as a work surface for mixing his food and for him to eat from, thus saving a lot of wiping bits of his food off of motel carpets.

Inside the containers were his food and water dishes, insulin syringes, his many medications (for arthritis, cataracts, and heart disease), a measuring cup so we could give him the same amount of food at every meal, spoons for scooping and mixing, a syringe for his Metacam, his fish oil supplement, his mini Milkbone injection rewards, dish soap, paper towels, wet wipes, and bottles of water. And lots of trash bags for dealing with whatever messes we made.

Then there were his testing supplies. Chris’ blood sugar was tested using a OneTouch Ultra blood glucose meter, once before three of his four meals and injections and any other time we were concerned. Chris got food and insulin at 4 a.m., 10 a.m., 4 p.m., and 10 p.m. and we usually skipped testing him at 4 a.m. So we had a meter (two actually, just in case), test strips, lancets, and a lancing device, plus paper towels for drying his lip before each test. And a bottle of pancake syrup in case of low blood sugar. With extras of everything—more food, syringes, lancets, and test strips than we could possibly need. 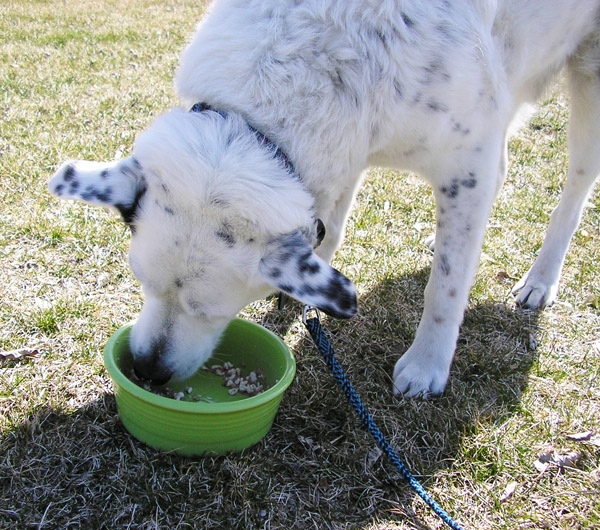 Chris polishing off a meal

When meal and injection time rolled around on the two-day drive each way, we would find a roadside stop, preferably with water for washing dishes, but always with a trash can. Over the course of that trip we stopped at a couple of parks, one cemetery, and a few gas stations.

First I’d test his blood sugar—usually with him lying down in the SUV—and then I’d mix up his canned dog food and lowfat cottage cheese in his bowl on top of the Sterilite drawer. He’d eat and get all of his meds and then my husband would take him for a little walk so Chris could do his business while I cleaned up his dishes. We collected all of his used syringes in a container and disposed of them when we got home.

At the motel, we would go through the same routine, just in warmer and more comfortable surroundings. Well, at least his meals were in more comfortable surroundings. Definitely one of the main challenges of traveling with a blind dog was finding an appropriate potty spot. In some cases we had to scrounge around among snow and weeds that were not easy for a blind dog to navigate. Like a lot of dogs, he had his rest area preferences and the motel did not always provide what he liked. Having a motel in a secure area was important as he liked to go out after each meal, including the ones at 10 p.m. and 4 a.m.

The main things, I think, are protecting the insulin, planning carefully for all meals and injections, and, most important, planning for the unexpected. Take enough insulin that you don’t have to worry if you drop a bottle. Take enough syringes that you can throw a few away. Take an extra meter or bottle of urine test strips (most people who test blood sugar wind up owning several meters) in case something happens to the main one. Take a ton of food and be absolutely sure you have syrup for low blood sugar. Which is why we had no room for our luggage!

Chris did wonderfully on that trip. Though I was freezing cold the entire time and whined to anyone who would listen (you’d never know I was from Montana), the temperature was just about right for him to be able to spend time in the car when we had family duties to attend to. And he enjoyed playing in the snow and exploring during our roadside stops. I would give anything to have him here with us to take another road trip.