Those of you with Boston Terriers or smooth-haired Dachshunds won’t care a bit about this, and I recommend that you instead check out Edie Jarolim’s post about taking Frankie into a cactus patch for a late-night bathroom break. I’m talking to the Cavalier owners, the Papillon owners, the (heaven help them) Sheltie owners — those of us with generously-coated and deliriously active dogs, who return from even a short walk a mass of burrs and pine needles and other debris.

At some point, it all gets away from you and you have to remove a wad of matted hair from your dog. At home, we use the astonishingly expensive Andis 65340 Super AGR (purchased because our vet uses them), but it’s too huge to pack. The travel trimmer that has worked well for us is the Wahl Touch Up Trimmer. 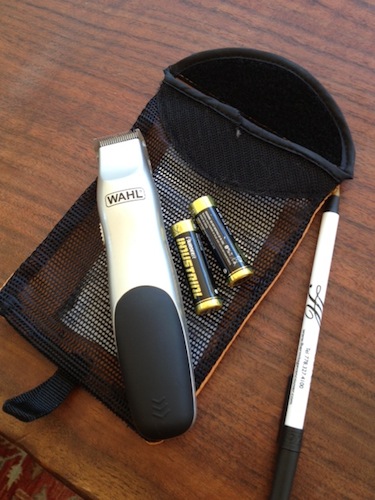 We’re staying in Marin, on a property where drifts of foxtail, ornamented with ticks, sway over a carpet of burrs. The travel trimmer has seen a lot of use.

It’s slender, light (my scale isn’t at hand, but the Wahl clipper has about the same heft as my cell phone), and powered by two AA batteries. It’s noisier than the Andis clipper, but it works well and doesn’t seem to bother Chloe. I recommend taking the batteries out when you’re not using it — I pack them and the clipper in a small mesh pouch I found at REI.

Why not just pack a pair of scissors, you’re asking? I started out using scissors on Chloe’s mats, until my vet told me what a bad idea that was. Your dog might move at the wrong moment, and some mats are quite close to the skin — she didn’t go into details, but I got the picture and put the scissors down.