It is always a pleasure to be contacted by airport reps and told about new pet relief areas. My post yesterday about the new location of Seattle’s indoor pet relief area must have caught someone’s eye at SEA, because I received a message from Perry Cooper, Sea-Tac’s Media and Public Affairs Manager, urging me to update my grumpy 2009 post about the airport’s only (at that time) outdoor pet relief area, a particularly nasty object at the north end of baggage claim.

The airport has a new, second outdoor pet relief area, he told me, located at the south end of baggage claim — and therefore much more convenient for people arriving on United, Virgin America, Frontier, Delta, U.S. Air, or an international flight. Mr. Cooper says that the new pet relief area is “outside door 00” (the exit door at the end of the terminal, past Carousel #1), adding that it is “outside the terminal south of the ground transportation lot where airporter and shuttle buses pickup and dropoff. Granted, it is a bit of a walk but well worth it for the expanse of grass and cleanup materials.”

It took me a little while, but Google Maps came through. Here’s a map of the south side of the terminal. That curved building you can see the edge of is the international arrivals area (you’re looking at the roof of the big lobby with the wall of windows and the antique plane hanging from the ceiling). Arrow #1 points to, essentially, Door 02 (outside of which is the bedraggled bit of landscaping people have been using, in desperation, as a pet relief area). Arrow #2 points to Door 00, leading to the “sidewalk of the shuttle lot and then to the [dog] park.” Arrow #3 points to the grassy berm I found in 2011. Arrow #4 points to the new, official pet relief area. It is indeed quite a walk.

Here’s what you’ll find when you reach it (my thanks to Mr. Cooper for the photos): 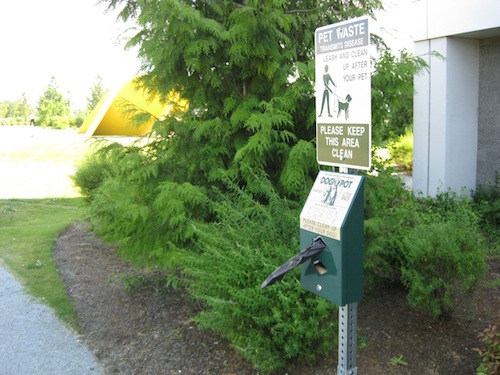 The classic pole with poop bag dispenser (presumably there is also, somewhere, a trash can.) Please note the yellow sculpture in the background, which will help you orient yourself on the Google Maps shot I provided. The pole must be located near the nose of that big blue bus parked just north of Arrow #4 in the Google Maps shot. 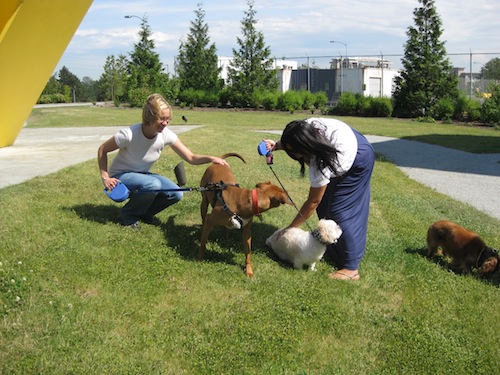 This shot appears to be taken facing south past the yellow sculpture (see the chain-link fence in the background, and the row of fir trees?). 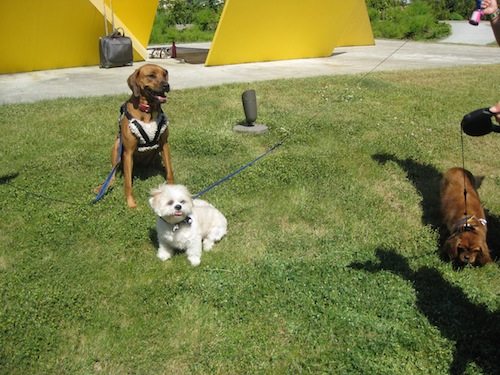 I wouldn’t have chosen to put my suitcase next to that no doubt well-marked sculpture….

It certainly looks pleasant in these sun-drenched pictures, but please note the lack of fencing, and the absence not only of a bench to rest your gear on but also a source of water. Is it worth the long walk from the terminal? Not to me. I’ll stick to my grassy berm, but I’ll be sure, as always, to clean up carefully after Chloe. Mr. Cooper followed up his earlier message with a kind correction to my map, and added, gently but firmly, “be aware of the little berm you recommend. That is actually landscaping and our landscapers might not be fond of any extra gifts left behind.”