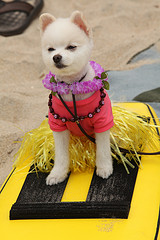 Photo by Port of San Diego

Surf was up this week, and dogs were hangin’ 18 at the fifth annual Loews Coronado Bay Resort Surf Dog Competition in San Diego. “The dogs are divided into weight classes and then judged on length of ride, confidence and overall ability. They have ten minutes and will be scored on their top two waves.” Heat One (for small dogs) was won by Abbie, an Australian Kelpie. Here’s a picture of a dog learning to surf, with his owner’s help.

In somewhat related news, a local paper reports that Northumberland (as far north as you can go in England before you cross over into Scotland) is bringing in more tourism dollars because most of its beaches are dog-friendly (unlike those in Devon or Cornwall). Check out the second half of the article for a list of the county’s beaches that are “included in this year’s good beach guide published by the Marine Conservation Society.”

Dogs on beaches only work, of course, if dog owners are responsible about picking up poop and keeping their dogs under leash or voice control. And not all beaches are dog-friendly: When no-dogs-allowed signs are posted, we need to look elsewhere. An article from this month’s Seattle magazine expresses one beachgoer’s (rightful) anger over dog owners not only disobeying local beach signage but also giving him grief for mentioning the rules.

Speaking of crossing borders, the Take Paws Winnebago headed north this past week, and the Burkerts posted a really helpful how-to for people planning to travel to Canada with their dog.

Back in the U.S., pawnation posted a useful article about finding dog-friendly hotels and places to visit — check out their links to dog travel sites and their suggestions for Austin, Boston, Hudson Valley, Santa Barbara, Scottsdale, and Maine’s Cape Elizabeth. Journey etc. listed its choices for the “7 Best Pet-Friendly Hotels in the US,” including L.A.’s Hotel Palomar, which gets applause for its complimentary dog “beer” (made from malt barley and beef broth, but convincingly packaged). While I was looking for more info about the dog beer, by the way, I came across this list, from Oyster.com, of the best pet-friendly hotels in Los Angeles — not necessarily posted this week, but too good not to mention.