This is a guest post by Jim McBean, a blogger, dog lover and guardian to a Border Collie named Sweety and an American Pit Bull Terrier named Zeus. Jim blogs at http://doggybytes.ca which focuses mainly on canine health and nutrition. I asked Jim to write this post after I found myself with a measuring cup in one hand and a Ziploc bag in the other, not knowing how much kibble to pack for Chloe. The package had a suggestion, but after reading Jim’s recent posts I no longer trust dog food packaging the way I used to…. 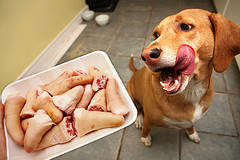 How much and how frequently should you feed your dog? There really isn’t one answer to this question. Some people free feed their dogs, filling their dog’s dish and leaving it out all day for the dog to “nibble” on. Other’s feed their dogs “three squares” a day.

I once knew a lady with a golden lab named Buddy. Buddy had to eat “lunch” every day at 12 noon, because well, that’s “lunchtime”.

I had a conversation with another lady, a cat owner who leaves a dish of cat food out on all three floors of her house, just in case her cat was hungry and didn’t feel like getting off the chair and go down to the kitchen to eat – I guess?

You Don’t Need to Eat Today, You Ate Yesterday!

Did You Know? Wolves can eat up to 20 pounds of meat and bone in a single feed.

I feed my dogs a raw meaty bones diet once a day, with healthy, single ingredient treats offered randomly. Rarely do they eat the same food two days in a row, and they almost never eat at the same time every day. This is not to say that it’s a “bad idea” to feed your dog at the same time(s) every day. At the moment my schedule allows me to feed my dogs whenever, and whenever is usually when I wake up.

Another thing I do is fast my dogs one day a week. No, this isn’t a mean thing to do, it actually gives their pancreas and digestive systems a break, and along with the RMB diet, more closely aligns with a diet that canines evolved to eat.

How Much To Feed

Recommending a portion size for kibble, that’s a tough one. Every formula has its own feeding recommendations, which you’d think would make it easy to figure out how to feed Fido or Chloe – just follow the instructions on the bag right? Well unfortunately in many cases it’s not as easy as that.

Take a recent study published in January by The Journal of the Americal Veterinary Medical Association, conducted by the Cummings School of Veterinary Medicine at Tufts University. The study looked at 93 commercially available pet foods (dog and cat) making “weight management” claims and showed that the caloric density of the pet foods studied ranged from 217 to 440 kilocalories per cup (kcal/cup), and portion recommendations ranged from 0.73 to 1.47 times the dog’s resting energy requirement. So basically double the calories and double the recommended feeding portions. Nice!

Co-author of this study Dr. Lisa Freeman, professor of nutrition at Tufts University’s Cummings School of Veterinary Medicine, says “There is so much information — and misinformation — about pet foods, it’s understandable that people are confused about what to feed their dogs and cats. To counteract these myths, people are accustomed to turning to the labels on food — but, as this study shows, packaging might not always be a reliable source of information.”

On average, a small dog will require 3% of its body weight in food (preferably raw meaty bones) on a daily basis, or 21% spread over 7 days. So, an 18 pound dog would need a little bit over 1/2 lb of raw meaty bones daily, or just under 4 lbs for the entire week. That’s a ridiculously small amount of food! 😛

What do you do if you travel a lot with your pet, aren’t crazy about feeding kibble but feeding a raw meaty bones diet isn’t possible while traveling? There is a third option, and that is finding a good dehydrated dog food that you can bring along with you and rehydrate at feeding time no matter where you are.

To be honest, I don’t know much about these products yet, but I did find a company online called The Honest Kitchen that I pointed out to my friends Rod and Amy Burkert of GoPetFriendly.com. They travel A LOT and wanted to feed raw, which isn’t feasible for them when they’re on the road, so they switched their pals Buster & Ty over to HK’s Force back in December. So far the reports coming from the GPF camp are of gleaming stainless steel food bowls (after eating) and very happy dogs!

Balanced nutrition does not happen on a “by the day” basis, but rather “balanced nutrition” is achieved over time. In fact, no animal on this beautiful blue globe of ours has ever achieved a “balanced diet” on each and every day of its life. Think about it, have you or anyone you know, ever consumed every single required nutrient every day for an entire week straight? No, because it just doesn’t happen that way.

Balanced nutrition is achieved by supplying a variety of necessary nutrients at varying levels over time. I could get into the implications that this has with regards to dogs eating the same nutrients in the same quantities every day over a its lifespan, but that’s another post.

To me, the notion of feeding a dog a daily fixed portion size doesn’t make much sense. As with people, there are several factors that dictate how much a dog should eat, age, activity level, health problems, metabolism etc. We know that when we gain weight we either need to increase our exercise level, decrease or restructure the amounts and types of foods we eat, or both. The same holds true for our dogs.

Give Your Dog a Bone: The Practical Commonsense Way to Feed Dogs for a Healthy Life