One of the places we could not find a La Quinta hotel on our recent cross-country trip was Palm Springs, CA (do not be misled by references to Palm Springs’ La Quinta Resort — it’s unrelated to the national chain, and inhabits an entirely different price realm; if your budget allows, though, it is pet-friendly). We kicked up our heels, therefore, and decided to stay at the Ace Hotel, one of a tiny chain of hip, urban hotels (the others are in Seattle, Portland, New York, Los Angeles, Panama, and London). Please note that I paid my own way at the Ace Palm Springs — I will always let you know when someone else has paid for all or any part of a product or an experience I’m reviewing.

The Palm Springs property charmed the pants off me. Those of you who find hipsters vexing will be, well, vexed, but I enjoyed finding a turntable and record albums in my room; seeing a rack of vintage bikes waiting (in vain) for me to tool around on them; and being offered French press coffee with my (delicious) breakfast. The property used to be a motel of the Howard Johnson ilk (that wasn’t its brand, but it gives you an idea of what the buildings look like). The rooms have been made over on a budget but with excellent style, and the outdoor spaces are very appealing. 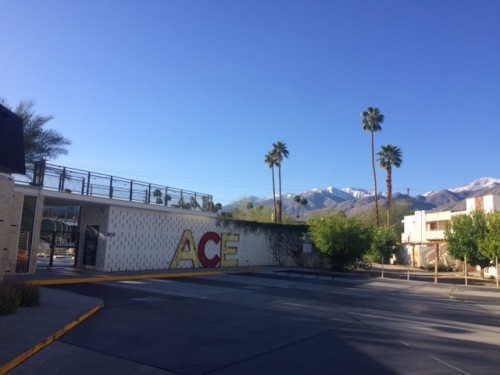 I was trying to get the big ACE letters and the mountains at the same time, and the result is…a lot of parking lot — but heck, you’re not following this blog for the photography. The pool area is through the walkway on the left. 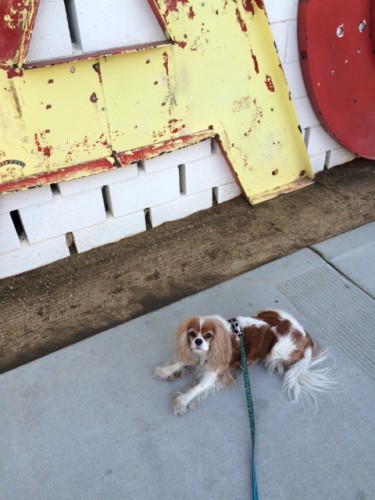 Chloe, starting to wonder whether her leash/harness combo is sufficiently stylish.

This is what it looks like from the street, as you come in the driveway — a little TOO much like an old HoJo’s, at first glance, but note the extreme macramé in the lobby window. King’s Highway, the restaurant, is past the lobby on the left. 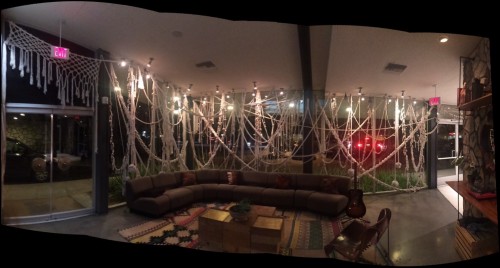 The lobby macramé — enchanting, and I’m a woman who lived through and loathed the 1970s macramé phenomenon. 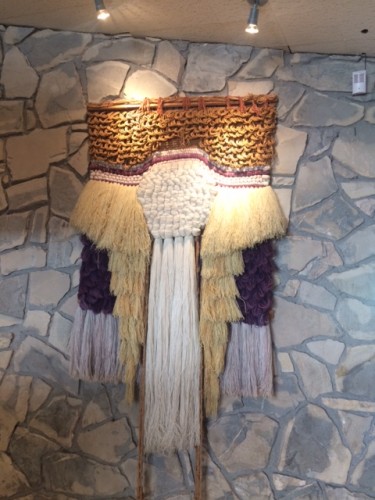 Which is not to say that there isn’t some really heinous macramé in the place. This is on one wall of the restaurant, and I’m just so grateful I didn’t notice it until we were finished eating.

The interior of my room. I never saw Chandler’s room, but she said it was similarly decorated — a lot of clever work with canvas and slatted panelling. 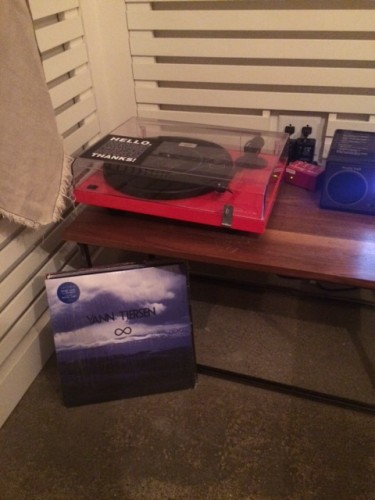 The turntable in the corner, with a selection of albums. Hanging over it, just out of picture, a couple of guest djellabas — a nicely-unisex alternative to bathrobes. 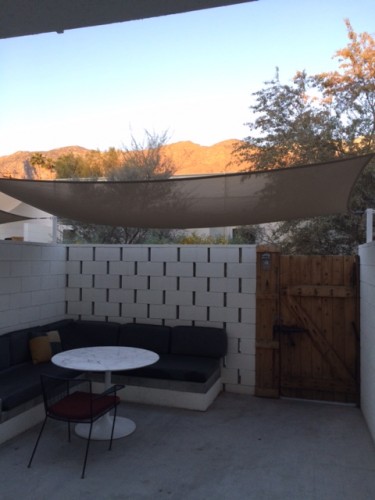 My little courtyard, early the next morning, with the sun on the mountains. One of the many delightful outdoor gathering spots — I wish I’d taken an evening picture of it, with the fire lit. The Ace would be a great place to go with a group of friends. It’s a surprisingly big hotel, or at least it seemed so — only two floors, but it sprawls. 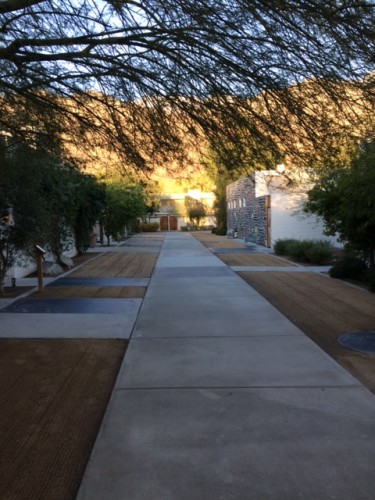 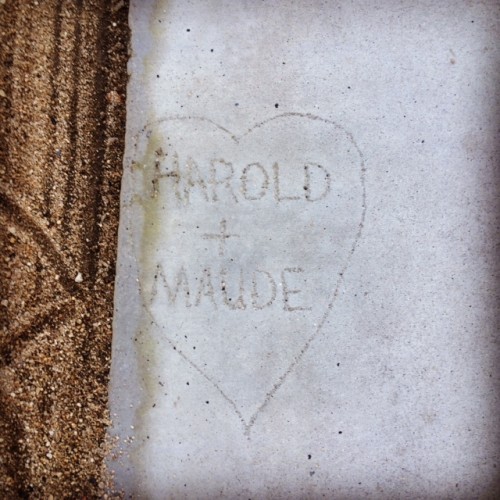 …and ornamented with graffiti. Everything Will Be OK — except that the dog park, referenced in that sign to the left…

…was a disappointment. But it’s totally skippable — at most, you might need to collect some poop bags from it, if you’ve run out of your own. 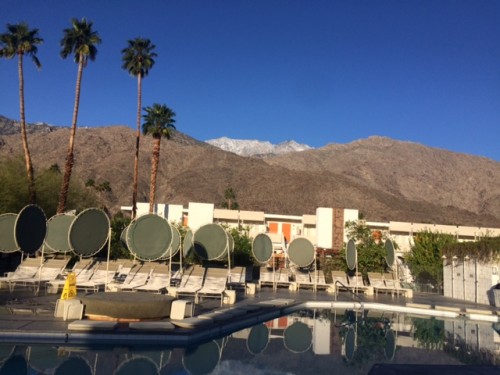 Early in the morning (the cleaning crew still has caution cones up), but clear hints of the gorgeous pool day to come. Pets not allowed in the pool area, but take your pup for a long walk and let her snooze it off while you bask. Last shot is of the pool area’s adorable Towel Truck.

You get the idea: Goofy, fun, well-designed. From the on-line comments, it sounds like it’s so convivial on the weekends that folks wanting a good night’s sleep should look elsewhere for lodging. We were there on a weekday, and even so, there was a very cheerful crowd enjoying each other’s company until very late indeed. That said, when I finally wanted to turn in, I called the front desk for help with the noise, and they responded instantly. No complaints there — my only complaint was with the intake process, which involved reviewing and signing a whole sheaf of forms (and only one of them was a pet policy form). For some reason, it threw me off my stride — but keep in mind that I’d just finished a long day of driving and was probably in a weakened state. When you arrive, gaze at the macramé, think about the pool and about breakfast (which I’ve already mentioned, but it deserves repeated praise), and keep signing your name.

The “patio rooms” are dog-friendly — click on the “Rooms” icon and look for “Patio with garden” and “Patio with fireplace.” There is a $25 per night pet fee.