I was contacted by the folks at Nick’s Cove, asking if Chloe and I would like to visit and let Dog Jaunt readers know what we thought of the experience. I instantly said yes, but I felt a bit of a fraud, since Nick’s Cove has long been on my list of places to check out. Then again, it might have taken me awhile to get there: We have generous friends who live nearby, and chances are we would have continued to borrow their house, rather than going to a hotel, however appealing. So take this review with a grain of salt (our dinner, hotel stay, and breakfast were paid for by Nick’s Cove) but make it a small grain, since all the friends who knew where I was heading assured me I’d love the place. I should add that Nick’s Cove did not request that I write a positive review — indeed, they left it entirely up to me to do what I would with my impressions.

A quick orientation: Nick’s Cove is a cluster of cottages with a restaurant — or a restaurant with a cluster of cottages, depending on your priorities — on the east coast of Tomales Bay, in Marin County (just north of San Francisco). Tomales Bay is a long finger of water reaching behind the Point Reyes peninsula, an extraordinarily beautiful place that, thank goodness, is largely parkland of various kinds. All this beauty is only about an hour’s drive from downtown San Francisco, traffic gods permitting, but it feels a world away. 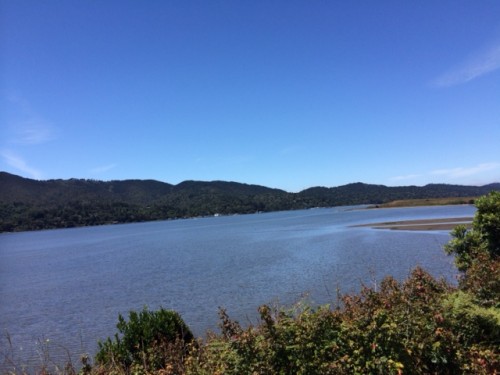 Point Reyes has the waves and the beaches and the dunes; Tomales Bay, behind it, is a more tranquil body of water. Here’s part of the bay on a practically perfect summer day.

The waterfront part of Nick’s Cove, from across Highway 1. I’m standing in front of the other half of the property, looking at the restaurant — the waterfront cottages are to the left of the restaurant, and the boat shack is at the end of the pier on the right. Behind me are the “water view” cottages and the Croft (the garden).

Nick’s Cove has been around for a while — people have been eating and relaxing on the property since the 1930’s — and it has the feel of a beloved old favorite (albeit a beloved old favorite that got a nice bit of updating a few years ago, under famed local hotelier/restaurateur Pat Kuleto). The best way I can show that is with pictures of our cottage, one of five along the waterfront (there are seven more across Highway 1, four of which are dog-friendly). We stayed in Al’s, one of the four pet-friendly waterfront cottages (Bandit’s Bungalow is the one waterfront cottage that’s not pet-friendly): 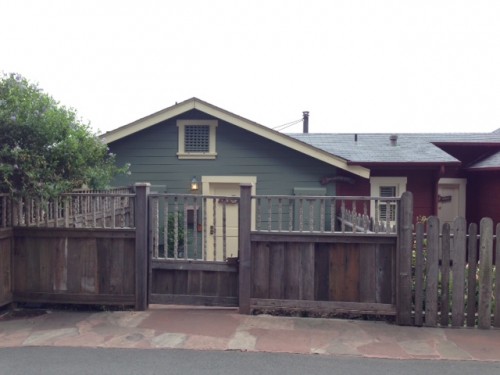 The land side of Al’s, with Ruthie’s to the right. As you can see, we arrived after the evening fog had rolled in. 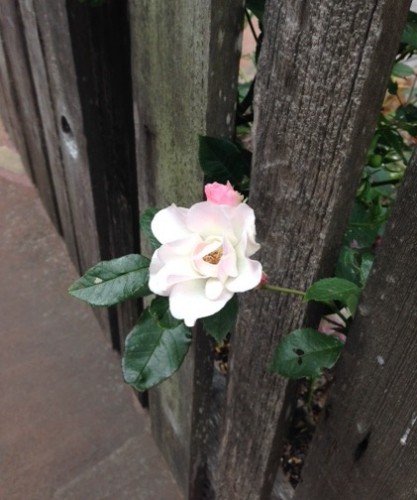 A rose poking through the fence in front of Ruthie’s cottage.

The living room of Al’s, with a view of the boat shack past the porch. Please note the wood stove, ready for lighting — a source of much coziness later in the evening.

The bedroom, also extremely cozy. That’s a king-sized bed, and I appreciated the selection of blankets (light cotton as well as a cloud of down, with a back-up hypoallergenic option in the closet). Marin is a land of many temperatures, and too many hotels would have provided the wrong, or insufficient, blankets. 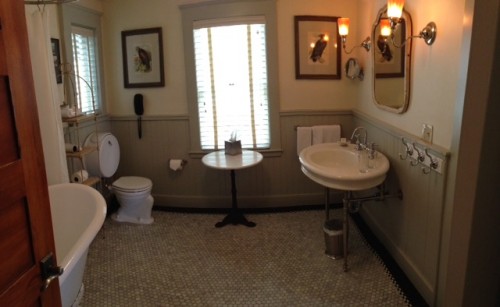 Our bathroom, a nice blend of the updated (that floor may look original but it’s marble, and heated) and the old-fashioned (the vintage toilet, sink, and bath all worked with modern efficiency).

Moments after we brought our suitcases in, and while I was still unfolding the sheet I pack to protect hotel beds from Chloe’s fur, we were delivered a plate of barbecued oysters. Everybody gets them, not just visiting travel bloggers, and they hit the spot. 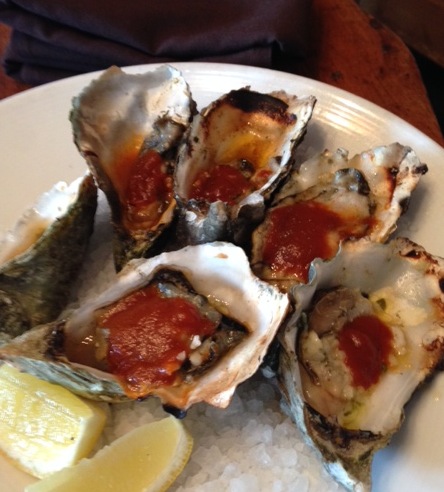 The oysters that saved our marriage — so sensible to provide guests with protein, mid-afternoon, rather than something sweet. Here’s one place where I got special treatment: Guests are normally welcomed with a couple of oysters each, but innkeeper Alyssum sized up our need and kindly added two more.

Nick’s Cove is within easy reach of a variety of outstanding food resources, including some remarkable dairies and farms (as well as oyster beds). They’ve also started a garden of their own, already providing the restaurant with eggs and a certain quantity of vegetables, herbs, and honey, with more vegetables and an orchard to follow. More about the garden later (it’s one of the places where your pet can join you), but all of that means that the restaurant has good ingredients at its fingertips, and our meals, including the room-service breakfast, were excellent. Our dinner (an outrageously good chowder and steak for me, with a tomato salad and a vast pork chop for my husband) was minus Chloe, but she could easily have joined us, in two different ways. There are a handful of outdoor tables, and on a warmer evening (or if we were more warmly dressed), we could have been served at them. Alternatively, that boat shack I’ve mentioned a couple of times is pet-friendly, and you can order take-out, essentially, from it. We walked down the pier to it after dinner, and it’s charming — there are a few tables outside, and inside there are more, warmed by a wood stove and a working piano. Next time we’ll settle ourselves out there, pick up the phone, and order dinner (you choose from the normal dinner menu, and when your order’s ready, the restaurant calls the shack).

Actually, Chloe could have joined us in a third way, but it wasn’t operational during our visit, perhaps because the evening was too cool: Between the restaurant and the waterfront cottages is a small outdoor lounge area where they sometimes set up an oyster bar. 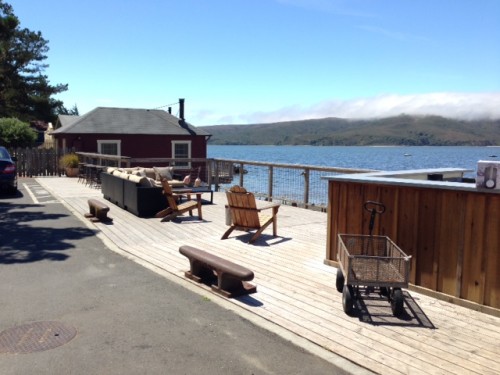 The lounge area: Clearly, I didn’t pay enough attention to the details, but oysters were involved, and your pet dog was welcome. The cottage just beyond the lounge is Ruthie’s, and Al’s is next to it. 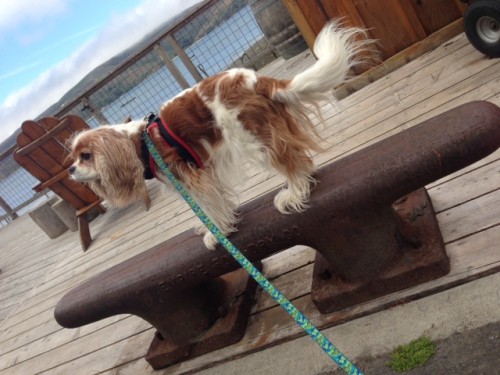 Chloe, ornamenting a bollard, or maybe it’s a cleat

Other nice touches for travelers with dogs? You’re met with a couple of home-made dog treats and a note explaining the rules: 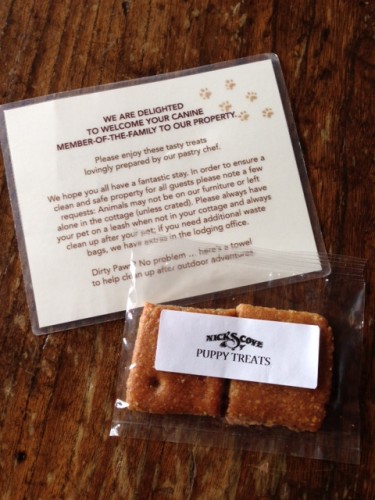 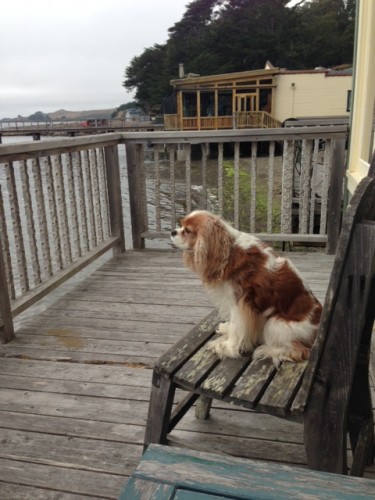 The property was very pleasant to wander around, and as I mentioned, dogs may join you as you walk through the garden (in the fullness of time, they’ll be able to join you as you relax and eat up there, too — the hotel has big plans for the Croft). 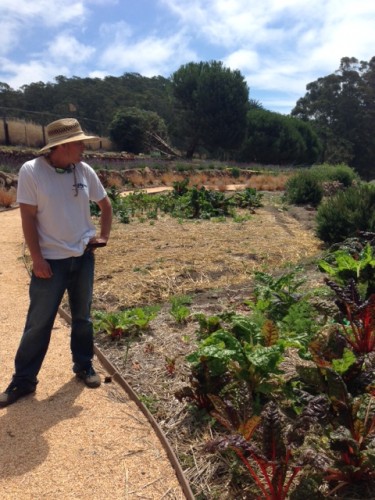 Ross, the garden manager, surveying chard. Beyond him is a future guest lounge area and an orchard — the Croft is just getting started, but it’s a sun trap and will thrive. 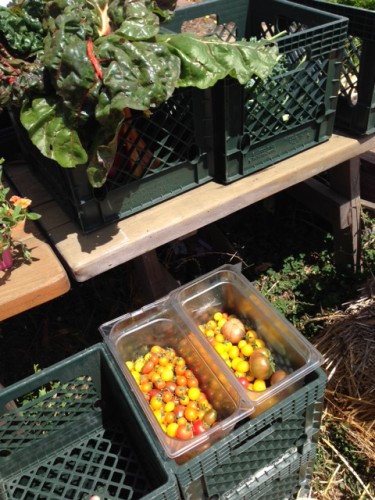 The gardeners among you will understand how pleased Ross is by these early harvests. 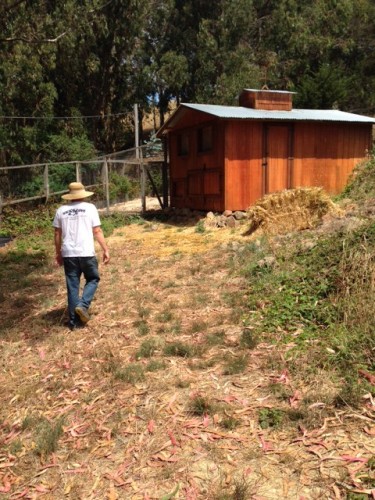 En route to the chicken coop — all of this area can be explored by guests with pet dogs, but be sure not to let your dog heckle the hens (and of course, pick up your pup’s poop). 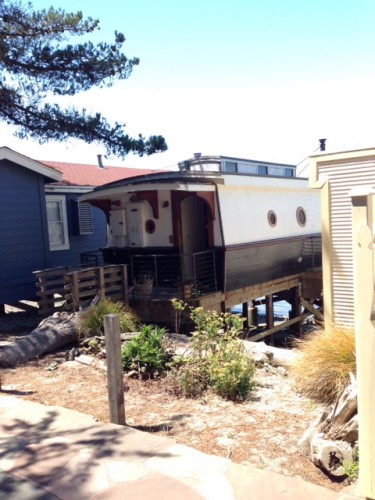 Nicolina, another dog-friendly waterfront cottage. Adorable, but tiny — perhaps not the choice for your Great Dane puppy.

Chloe and the boat of nasturtiums, moored outside the Innkeeper’s cottage

Chloe was perfectly happy at Nick’s Cove, and we were too. If I had to find a nit to pick, it’d be that our cottage, at least, didn’t appear to have working windows, so our nighttime ventilation option was the back door. Leaving it open was safe enough, barring a really determined effort to do us evil, but we feared mosquitos (in fact, there were none, perhaps because of the breeze from the bay — I had an unfortunate encounter with a wasp, the next morning, but that was on the less breezy side of the property). The room music options were also limited (to Reggae Blend, Smooth Jazz, Coffee House, Traditional Country, Soft Hits, and New Age), so next time we’ll bring our wireless Bluetooth speaker with us. There’s no cellphone coverage, but the wifi was adequate to our needs.

My guess is that you, like us, will not miss being powerfully connected to the rest of the world. Nick’s Cove takes you back to a bygone era of vacationing, tempting you to do no-tech things like putting together puzzles, or playing music, or listening to the waves, or watching pelicans make their hunting passes up and down the bay. I appreciated the slightly battered, Adirondack camp feel of the place, and I appreciated, too, the touches of luxury — the vast bed, the heated bathroom floor, the Bulleit bourbon available for purchase in the room. A lot of thought went into providing the packet of lavender bath salts I found right when I was hoping for one; the containers of real cream to go with the (darned good) coffee we made in the room; the extra table, next to the vintage bathroom sink, big enough to hold bathroom gear; the pair of house-made chocolate cupcakes we were handed as we checked out. We liked it all, and we’ll return.

Nick’s Cove is pricey (I didn’t realize quite how pricey until I started writing this post), but if your budget allows, get one of the waterfront cottages. I visited Uncle Andy’s, one of the pet-friendly cottages on the other side of Highway 1, and while it was very attractive, it was a (small, rural) highway away from the water. Other fun things to do with your pup in the area? Check out the pet-friendly trails and beaches on Point Reyes (they’re limited in number and area, but still, good stuff); wander around the charming town of Point Reyes Station (we’ve visited the dog-friendly bookstore, and dashed in to Cowgirl Creamery to pick up a sandwich); or bring your pup with you to Hog Island Oyster Co. or The Marshall Store, both sources of superb oysters (Hog Island has a shuck-your-own option, but shucked oysters are readily available, never fear) and other good lunch/early dinner options. Hog Island is all outdoors; The Marshall Store welcomes pet dogs in its outdoor areas, but not in its building. Keep your pup on a leash in both places, and, of course, pick up after her.