I’ll just admit up front that this is a low point in my life as a blogger: Reader Stefanie sent me two fantastic messages about this trip a year ago — yes, in June 2015 — and I am only now posting them on the blog. I have apologized to her, of course, and now we will all take a deep, cleansing breath together, swig from a mug of green tea, and stride mindfully into a future of timeliness. 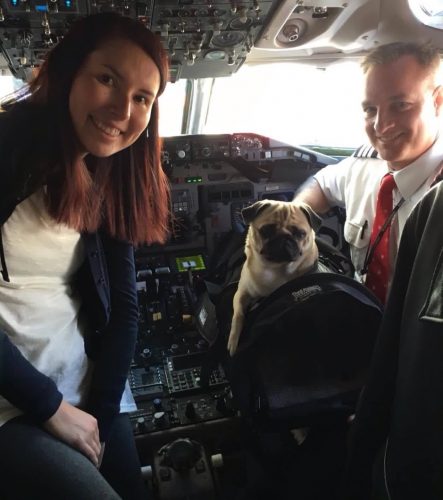 How great is this?! After this post was published, Stefanie sent another photo of Papaya, on another Peru trip, but this time visiting the captain in the cockpit.

Stefanie is originally from Peru, and now lives in Southern California with her husband and Papaya, her young male Pug (Papaya weighs about 19 lbs.). A year later, Stefanie reports that they have added a second Pug to the family. They travel between Southern California and Peru at least once a year. That’s not your run-of-the-mill pet travel, and I’m thrilled to have her guidance. Here’s her report (links to the products she mentions are provided at the end of the post):

“Papaya and I booked our trip to Peru with American Airlines a couple months in advance. Reservations was very nice about adding a pet to my reservation ( I called them after I booked my flights online); they didn’t charge me any fee for adding him to the reservation over the phone.”

“I planned on taking a dog stroller with me and asked about it, since on their website you’ll only find information regarding baby strollers. The representative said I should have no issues, so I went ahead and bought a Pet Gear Happy Trails Stroller. We practiced going on walks around the neighborhood, and took Papaya to the veterinarian and many other places with it, so he would get used to being inside. I also bought a Gate Check Stroller Bag to protect the stroller [while it was stowed on the plane]. [Editor’s note: Stefanie used the tips in this post and its comments to get started with using a pet stroller for plane travel, but she gave me more useful tips in her messages, which I’m adding as a comment to that stroller post. Yet again, thank you, Stefanie!] 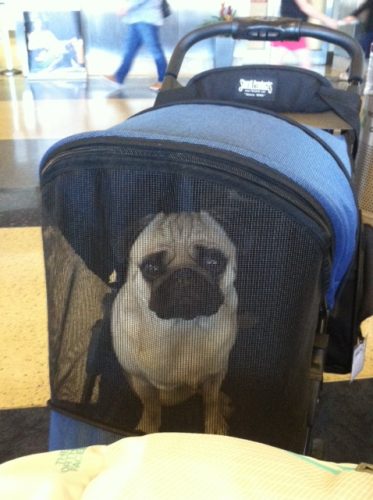 For this trip we also bought a Large Sturdibag. We have the Medium Sherpa with wheels (we traveled with it the year before), but Papaya is now too big for it; also, the wheels take extra room and Papaya hates being dragged so I had to carry it on my shoulder anyway. He loved his Sturdibag from day 1 —  I left it in the living room and he would take his naps in it, I would take him on car rides and to go pick up his food, he got used to it very fast. I should mention he is a big little dog, he weighed 19.17 lbs the morning we left.

Our trip begun at LAX, which is 1 1/2 hours from home. I took him on a long walk, fed him his regular breakfast and took his water bowl away an hour before departing to the airport.
Check-in had to be at the counter because I was traveling with a pet. I knew this already so I was ready with all my papers at hand.”

“We had a little issue here: The AA counter lady couldn’t find a way to add the charge of $125.00 so I could pay. The supervisor couldn’t either. The issue was that we were going to Peru and they weren’t sure dogs were allowed to travel there in the cabin or as a checked pet. So I showed them the “Traveling with pets” information I had printed (I had one I printed on the day I made my reservation and one I printed that morning). It mentioned the countries in South America where pets are not allowed, and Peru is not on that list. BUT it doesn’t mention the countries where dogs ARE allowed, so that was the issue. We were there longer than normal —  the supervisor had to call Dallas Int. Airport and talk to someone from the crew of the flight going to Peru to ask if they allowed dogs. Luckily, there was someone there who said: “Yeah, I’ve traveled with a dog to Peru.” So the $125.00 was charged as a MISCELLANEOUS (she had to add “Cabin Pet Fee” manually). So my advice is: Know the rules. Print the airline pet policy. Be friendly but firm [emphasis added by Dog Jaunt, who applauds Stefanie for her preparedness and tenacity].

They didn’t weigh Papaya (the AA web site doesn’t mention a weight limit anyway) but the counter lady did look at him in his carrier to make sure he was comfortable. Both the counter lady and her supervisor were very very nice.

After that I transferred Papaya to his stroller, went through security (it was very easy, I followed the instructions another reader of your blog gave me about traveling with a stroller). Oh, I got him a TSA Fast Pass harness (size XL). It was a little tight but it gave me peace of mind that if he happened to escape while going through security he had all my contact info with him (he only wore it to go through security). Then we found our gate, transferred Papaya to his Sturdibag, got a Gate Check tag for his stroller from a gate agent, and to the airplane we went.”

“Our first flight was a 3-hour one from LAX (Los Angeles) to DFW (Dallas-Fort Worth). We had seat 9F (window) in Main Cabin Extra. The middle seat was empty, so I had a little extra room for my backpack with all of Papaya’s needs. We had extra leg room just in case; I’m only 5’4 but I wanted the extra room for Papaya’s carrier. The airplane was a 737. I noticed that the middle and window seats had more room; I don’t think a Large Sturdibag would have fit under an aisle seat. 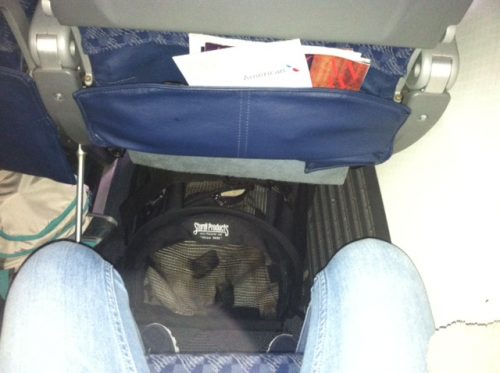 The next flight was 7 hours from DFW to LIM (Lima), also in a Main Cabin Extra window seat (14A). The airplane was an old 757-200. Very uncomfortable for me. Papaya slept most of the flight, I put his carrier on my lap. The people sitting next to me loved Papaya, they even let me put my backpack in their under-the-seat space.

During both flights, I fed him his little freeze dried treats, gave him a few ice cubes and had a little fan by my feet so he didn’t overheat. I didn’t sedate him, he slept most of the time, he did whine a couple times but a treat or my hand inside his carrier would calm him.”

“Both outbound flights were very easy and our stroller was waiting for us outside the gates. Once in Peru we had to go through Immigrations (I must add that they told me me to use the Preferred Line — I replied that I didn’t have a baby, since I didn’t want to make anyone uncomfortable), then we had to stop by the SENASA office [Servicio Nacional de Sanidad Agraria del Peru], where I had to pay S/.98 ( around $30) for his entrance to Peru. They asked for all the papers (vaccinations, health certificate, USDA endorsement), gave me a receipt and off we went to get our suitcases.” [Editor’s note: Here’s a link to the current USDA page for Peru, providing a form of the paperwork needed; please note that Peru is a country that requires tapeworm treatment shortly before arrival.]

Returning to the U.S. from Peru

“We spent almost a month in Peru ( yeah, 1 1/2 suitcases were just supplies for Papaya). On the way back, again we paid the $125 fee at the counter (Lima’s airport is very hectic so I recommend arriving with a lot of extra time if traveling with a pet). He wasn’t weighed.

Our first flight from LIM to DFW was delayed more than 2 hours, it was again an old 757. I sat in a middle seat in the Economy section. I didn’t take a picture this time, but Papaya’s carrier fit just fine. He was on my lap the whole flight anyway (except take off and landing).

We missed our second flight, DFW to LAX (our first flight arrived late; we had a delay at Customs; and also Grandma can’t walk that fast anymore). My mom took Papaya outside Terminal D to potty while I rechecked our luggage and got new boarding passes for the next flight to LAX. We took the Skylink again to our next terminal, and waited at the gate.

[Stefanie had some vexing issues with her pet stroller in DFW:] Papaya’s stroller, which I checked at the gate in Lima, was not at the gate in DFW when we landed. Instead, we had to pick it up with the luggage. Again, when checking the stroller they said I had to pick it with my luggage in LAX — this time they said it was because I didn’t have a baby. So I (106 lbs tiny lady) carried his 19 lb. body all the way back home, which gave me bad bad bruises 🙁 I was really unhappy with AA.

The second plane was a new plane, an A321. I sat in a middle seat in the Economy section, between Mom and Grandma. Under all the seats were these entertainment boxes. They took SO much room, Papaya’s carrier barely fit. 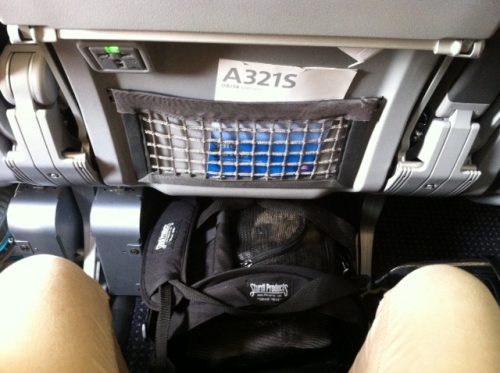 That is a snug fit (though it is, in fact, fitting) — this is Papaya’s large SturdiBag under a middle Economy seat on an American A321(S) plane.

He wasn’t comfy at all and scratched at his carrier, especially during the delays, which scared me — I started to notice the mesh screen breaking. I was so scared he would make a big hole and then I’d have a loose dog in the airplane. I again put his carrier in my lap as soon as we took off.

We landed in LAX and came home safe and sound. Papaya was obviously tired and slept in the car all the way home.”

Stefanie concludes with kind praise of Dog Jaunt, and also mulls over her future plans: She bought the pet stroller to help negotiate airports (I’m taller and larger than Stefanie, and carrying Chloe — who’s significantly lighter than Papaya — on long travel days takes a toll on my back, so I understand her motivation), but because the AA staff had different understandings of the rules, Stefanie didn’t have access to the stroller in DFW and in LAX on her return trip (even though it was delivered to her DFW and LIM gates on her outbound trip). She’s considering doing without it, especially when she’s traveling with her husband. She has, too, since contacted SturdiBag and paid to have her carrier’s mesh replaced with the sturdier mesh they provide on request. Bottom line, though, is that “Papaya and I had a wonderful time in Peru,” and Stefanie was already planning their next trip. Thank you so much, Stefanie, for the great information and pictures, and for your patience in waiting so long to see them shared with your fellow travelers!