I had previously stayed at Kimpton hotels in Portland — the Hotel Monaco, which I’ve reviewed, and the Kimpton RiverPlace Hotel, which I haven’t — but my uncle is a devoted fan of the Mark Spencer Hotel, and finally persuaded me to give it a try. Now I’m a fan too. The Mark Spencer is comfortable and stylish, the front desk staff could not have been kinder to Chloe or to us, and the hotel’s location (“where the West End meets the Pearl District”) is perfect. 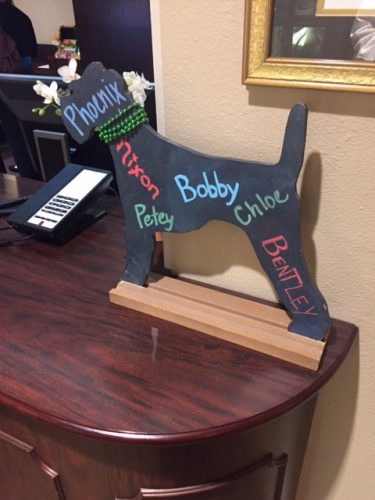 This is the same trip to Portland that we — including Chloe! — took via Amtrak, and the Mark Spencer is a do-able walk from Portland’s train station. It’s also just a couple of blocks from Powell’s, Portland’s divine bookstore (which is not, alas, pet-friendly), and from a Whole Foods Market.

While the “Deluxe Queen” and “Deluxe King” rooms have mini-fridges, the other rooms have very serviceable small kitchens; with such easy access to good groceries, cooking would be easy. That said, Portland is a city of superb restaurants, and several favorites (including Grassa/Lardo, Kenny & Zuke’s, and Blue Star Donuts) and soon-to-be favorites (Clyde Common, SuperBite) are also within a couple of blocks. The hotel provides a list of downtown Portland restaurants that welcome pet dogs to their outdoor seating areas, including Bluehour and Caffè Umbria.

Rummaging through my phone, I find that I only took pictures of the dog information packet  (including a particularly crinkly packet of dog treats) that was waiting for us: 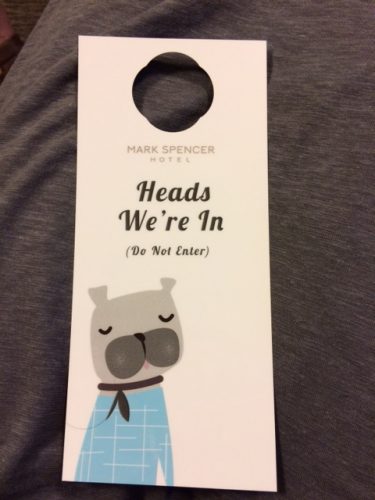 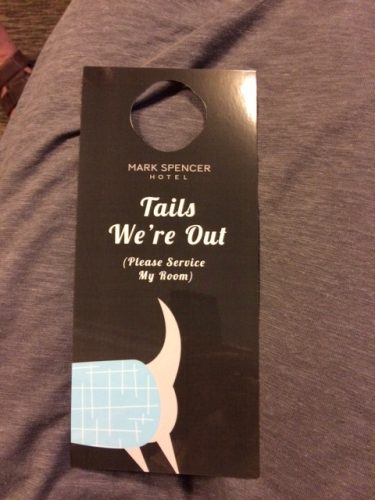 …but it charms me. 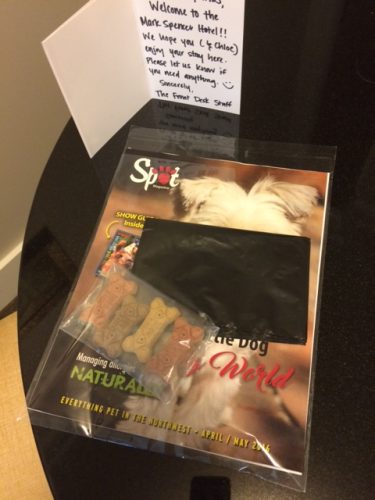 Poop bag, crinkly bag of treats, useful info; but also a nice note from management, and truly, the folks at the Mark Spencer (all of whom seemed to be pet owners themselves) came to pieces over Chloe

The photos on the hotel’s website, however, accurately reflect what the rooms look like (my mother-in-law moved partway through our visit, so between us, I got to see three different rooms). There is a pleasant complementary breakfast, served in an atrium off the lobby; the lobby area also includes the most elaborate coffee machine I have ever seen, and I have fond memories of curling myself around cups of coffee in a quiet, library-like room just opposite the front desk. While we repeatedly missed it, there is also a daily wine & cheese event, and I suspect that it too is in that library room.

We paid our own way at the Mark Spencer Hotel. It’s no longer the bargain my uncle raved about years ago, but I found the price reasonable, given the hotel’s location and the pleasantness of our stay. There is a $25 per pet, per night fee, and according to the hotel’s website, only certain floors are pet-friendly. However, by the act of some good fairy, we ended up being given a “Master Executive Suite” instead of the “Deluxe King” I’d reserved, and it was pet-friendly, so the floor limitations don’t affect the quality of the available pet-friendly rooms.