Those of you who follow Dog Jaunt’s Facebook page will know that I first saw this carrier in a celebrity shot in the Daily Mail: Julianne Hough was carrying it through an airport, and my eyes lit up because in it was a Cavalier King Charles Spaniel just like Chloe. 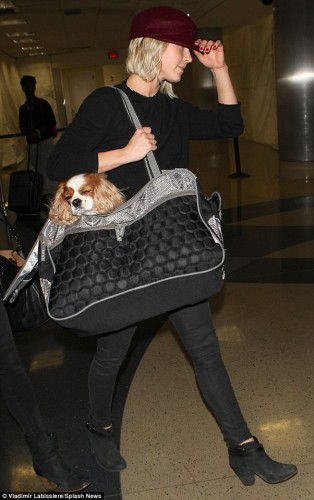 Photo from the Daily Mail

Workable in-cabin carriers for larger small dogs are rare. I figured out the bag’s brand and model, bought one, and took it on a flight — and then my life got very complicated indeed, and I forgot everything I’d learned about the Teafco Argo Petagon. I have these pictures to show you, to prove that it fit acceptably on our Virgin America A-319 plane, but all my thoughts about it just melted away: 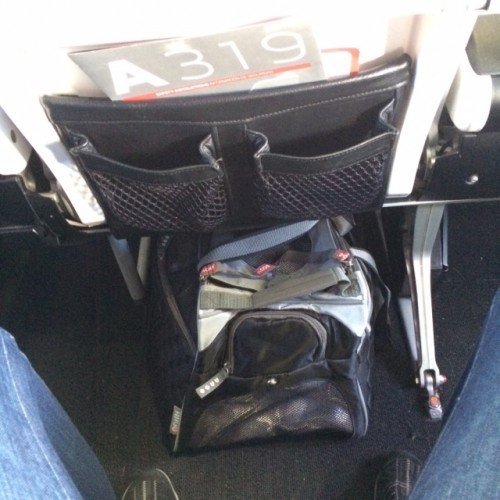 The large Teafco Argo Petagon, with Chloe, under a Virgin America A-319 seat 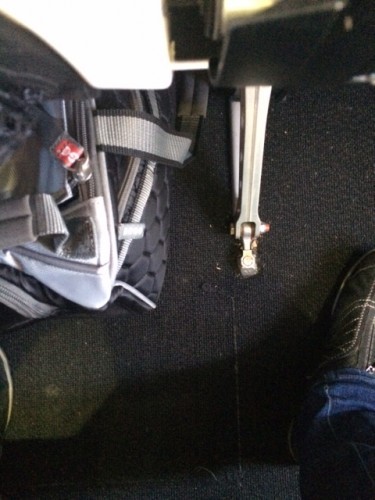 And a close-up of it, showing that it ended just about where the seat support ended.

But there’s always the next trip, and my forgetfulness just means that now I can report on the Petagon’s performance on two different airlines. Here it is in the window seat of a Southwest 737-700 plane (the emergency card has two options, but I happened to notice that it was in fact a -700 series plane): 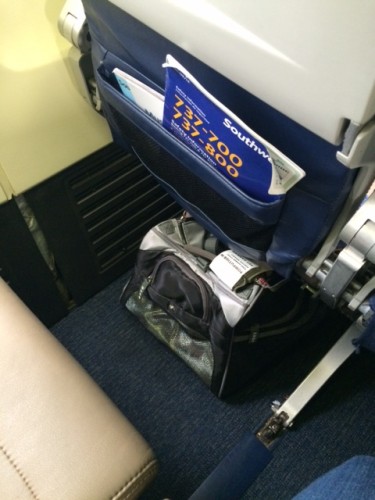 The large Petagon under a window seat on a Southwest 737-700 series plane. My seat mates hadn’t yet arrived, so I could get this shot showing how the end of the carrier is just parallel with the seat support.

I call that a darned good fit for a pet carrier (better, in fact, than its fit on the Virgin America flights we first used it on), so I was surprised when a Southwest flight attendant questioned its length. This fit would normally go unremarked, and I say that after years of flying with various bags, and seeing readers’ pictures of their carriers in action. I believe that it was just a quirk of this particular flight attendant (every now and then I’m reminded forcibly that airlines are a collection of individuals). He backed off, in any event, and no other flight attendant on the following three Southwest flights I took looked twice at it. I wouldn’t anticipate that it’d normally raise serious objections. 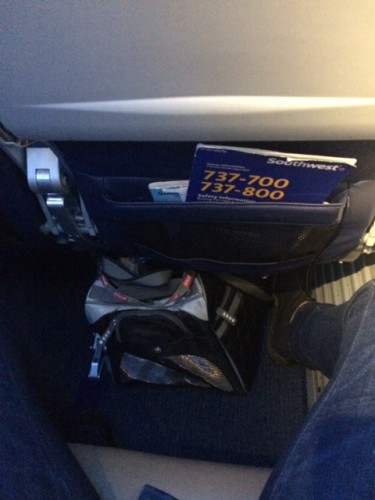 The large Petagon (with Chloe inside but, dangit, invisible) under a window seat on a Southwest 737-800 series plane. No problem at all with the carrier on this flight or the two preceding ones.

It’s worth taking that bit of risk with the bag, because it’s large enough to accommodate a pet larger than Chloe, and that’s rare in an in-cabin carrier. The manufacturer states that the large Petagon (please note that it also comes in a medium size)  measures 21″ L x 12″ W x 13″ H; measuring tape in hand, the bag I have clocks in at 21″ L x 12″ W x 12″ H. With regard to its width, please note that its long sides slope inwards, so the bag is 12″ wide at the bottom, and 9″ wide at the top. In practice, under an airplane seat, the top of the bag squashes down a bit, and the sides bell out, providing more actual width than the 12″ bottom width suggests.

The first picture in this post, of Julianne Hough carrying the bag, makes the Petagon look enormous, but recall that she’s not much over five feet tall. I’m just shy of six feet tall, and here’s how it looks over my shoulder: 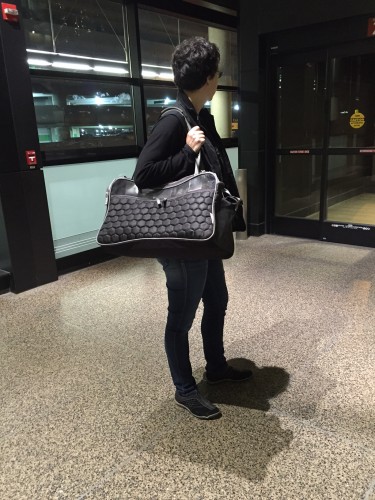 That’s not an unreasonable-looking bag.

My recent trip with the Petagon refreshed my memory about its pros and cons. Here’s what I liked: The bag has plenty of mesh panels (including one across its top); they’re double-thickness, and the inside mesh layer is woven finely enough that I believe it would resist even a cat’s claws; there are two very substantial side pockets, and a useful end pocket; a zipped hatch opening at the other end provides easy patting and treat dispensing access even when the bag is stowed under a plane seat; and there is a strap along the non-pocketed long side through which a suitcase handle (or a car’s seat belt) can pass. There is an internal tether, which is, generally speaking, a plus; I just wish that this one weren’t sewn in, and could be detached or tucked away. There is a padded bottom tray that can easily be removed and cleaned. Its surface is slick and shiny; I recommend that you add a soft pad of your own to it.

All that said, I won’t be swapping my large SturdiBag for the Petagon. I worry that the double-thickness mesh panels don’t let as much air through to Chloe as the coarser-grained SturdiProducts mesh, and I disliked how the Petagon panels caught and reflected light back at me, preventing me from seeing through them. Chloe was essentially invisible to me throughout our trips, except when I zipped open the end hatch to pat her or give her treats or ice cubes.

The two handles were long enough that they pretty much stayed on my shoulder — but the outer handle of any two-handled shoulder bag is always going to be a bit slippy, and the Petagon is no exception. I prefer a bag that also has a long strap that can be adjusted to go over a shoulder or across your torso. Unfortunately, there is no way to add your own shoulder strap to the Petagon, if you had an extra one lying around — there are no loops on the bag to clip it to.

My main objection to the Petagon is the silvery sheen of its mesh panels, but right behind it is the construction of its top. On the bright side, it has three different fastenings, making it unlikely that your pet can pull a Houdini escape on you. Zippers along each of the long sides are tugged closed with a joined handle; there’s a line of Velcro on the short end of the top flap; and a substantial plastic clip can be snapped closed, to give the Velcro solid reinforcement. 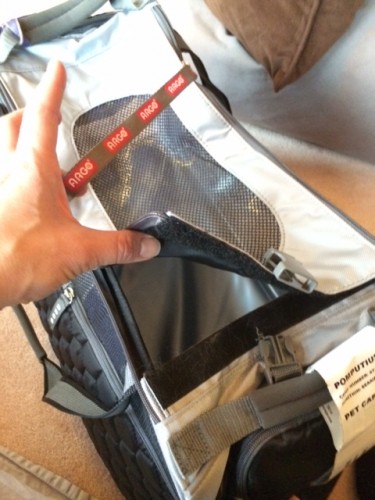 The top of the Petagon — I’m holding the red joined zipper handle with my ring finger, and turning back with my thumb the bag’s top flap to show you one of the zippers’ paths, the Velcro strip on the short end, and the plastic clip.

That’s good thinking, but the parallel zippers made me crazy. Chloe has long hair, and there is no mechanism (e.g., a shielding layer of fabric) to keep it from getting caught up in the zippers. That meant that I had to slowly zip each side closed with one hand, sliding my other hand under the bag’s top between the zipper and Chloe’s fur. Because the zippers are joined with a pull handle, you can’t close one at a time, but rather have to switch back and forth between them. That was annoying and slow. It wasn’t a disaster, because Chloe’s not an escape artist, but I can imagine it being a problem with an agitated dog, or a cat.

Please note that the only way to load a pet into the Petagon is through the big top opening. For some of you, that’ll be a plus (I sometimes hear from readers who don’t like the SturdiBag’s side “door”).

Despite those drawbacks, I will be recommending that folks with larger small dogs consider the large Teafco Argo Petagon. Overall, it’s a well-made bag, and offers useful additional length while still fitting plausibly under an airplane seat. Please note that the large Petagon is currently out of stock, both on Teafco’s site and on Amazon. I spoke with a Teafco customer service rep who told me that they expect the bag to be back in stock at the end of June or the beginning of July 2015. It is by no means discontinued; he described it as “one of our favorite carriers.”