Here’s another photo to share with you of a large SturdiBag in position under a plane seat, thanks to reader Kathy. She posted a message this week on Dog Jaunt’s Facebook page, telling me that she’d taken Theodore, her 13 year-old Toy Poodle, on his first plane flight, and all went well — and she was extra-relieved, because Theodore is “a delicate little guy.”

They flew on a Southwest 737-700 series plane, in a middle seat, and Kathy bought the large SturdiBag. Here’s Theodore, en route: 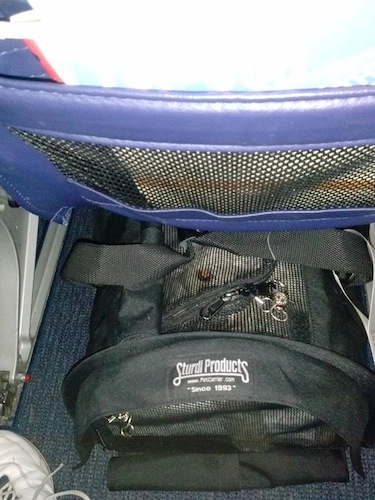 Theodore, in a large SturdiBag, under the middle seat of a Southwest 737-700 series plane

Kathy reports that “the Sturdi Products large carrier you discussed on your website was a godsend. It fit easily under the Southwest 737/700 center seat and I was able to give him water and treats through the well made zippered top opening.”

I’ve written about the Southwest 737-700 under seat space in the past, and, while I was rummaging around for that link, discovered that I’d also posted a picture of my own of a large SturdiBag (and a medium Sherpa bag) on a 737-700, but I’m still grateful to Kathy for her picture and report. For one thing, she’s not me, and I think it helps other readers to hear from more than one person that a carrier works well in a particular situation. For another thing, Kathy had the presence of mind to take a second shot that included the seat card for her plane, proving that it was indeed a Southwest 737-700: 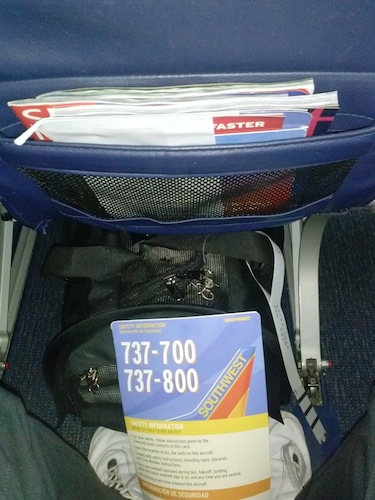 Those of you planning to travel with your pup on a similar plane, with a similar bag, might want to bookmark this post, so you can show a Southwest rep — in a pinch — that the bag will indeed fit under your seat.

It’s also nice that Kathy’s pictures are from May 2014 — it’s just that much more convincing to see a current photo.

Thank you again, Kathy, for taking the time to send info back to the Dog Jaunt community (and for your kind praise for the blog)! I’m tagging this post so that it joins Dog Jaunt’s growing collection of pictures of carriers in action on planes.