As readers of Dog Jaunt’s Facebook page will know, I’ve long wanted to visit the Hastings House Hotel. It’s a Relais & Châteaux property, so I knew it would be lovely — and I knew it would be pricey too. It was, but with the help of a “winter escape” package, it didn’t break the bank. There is a $50/day pet fee. (As you can tell, we paid for our stay — I will always let you know when I’m reviewing something that has been paid for by someone else.)

The hotel — really, it’s misleading to call it a “hotel,” since it’s more like a country house estate, with a larger manor house and nearby rooms, at least two separate cottages, several charming outbuildings (the reception area is in the former chicken coop, and the spa is in, I think, a former barn), and a large, picturesquely-enclosed garden. So let’s say instead that the property is on Salt Spring Island, one of the larger of the Gulf Islands (an archipelago sprinkled between mainland British Columbia and gigantic Vancouver Island). It overlooks the tiny harbor of Ganges, the main village on the island, and if you wanted to, you could catch a seaplane and land just below the hotel. Salt Spring Air, for example, will take you (and your pet dog) from downtown Vancouver to Ganges in just over half an hour, or from Vancouver Airport (YVR) to Ganges in just under half an hour, and so will Harbour Air.

We had our car, so we opted to take the ferry instead. The B.C. Ferries terminal at Tsawwassen was a short (say, 20-minute) drive from downtown Vancouver, and we’d made a reservation for our sailing, so it was a non-eventful crossing to Long Harbor (the big ferries drop their Salt Spring Island passengers off at Long Harbor, not the little Ganges harbor). Once you get off the ferry, it’s only a few minutes’ drive to Hastings House. The sign is on the left, the driveway is long, and by the time you park outside the wooden gate and find the reception desk, you’ll already be calmer and happier. Rather than explaining why, I’ll show you pictures — what they can’t convey, though, is how cozy the place smelled (wood fires, how I love them) and sounded (particularly at night, when we were lulled to sleep — no, really! — by the sound of frogs): 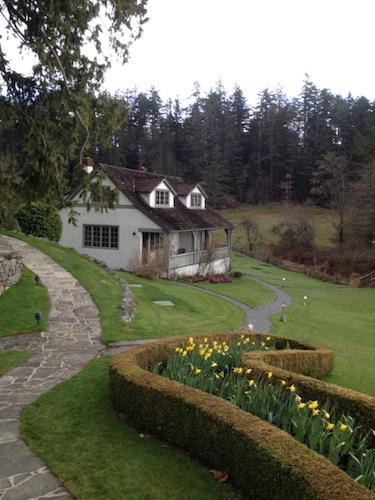 The cottage we stayed in is one of the dog-friendly options. Our half, on the right, is called Farmhouse East. I completely failed to take a picture of the inside — the pictures on the site are accurate, except the bedroom shot has been reversed for some reason. 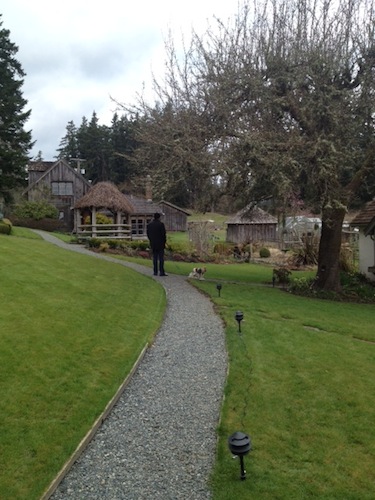 Looking out the front door of the Farmhouse — Chloe is checking out the well and another guest cottage, and the large garden is just out of the picture to the right (when it hits its stride, it provides all of the flowers and vegetables for the rooms and restaurant) 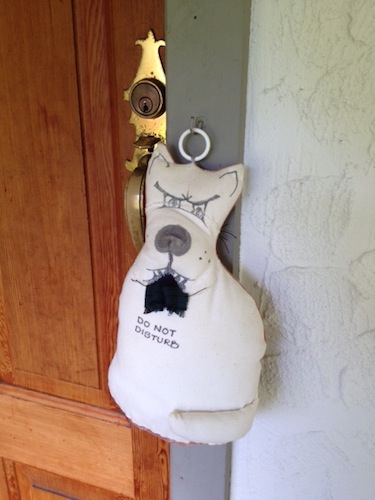 The Do Not Disturb dog has a scrap of fabric from an old skirt of the housekeeper’s in his mouth…. 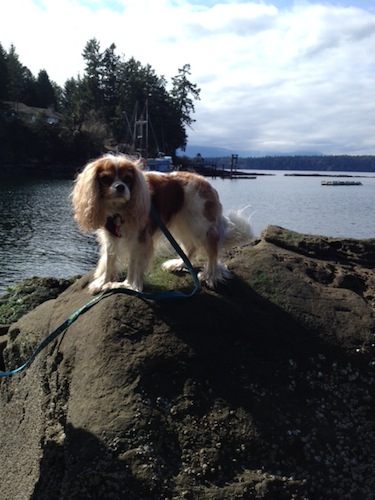 The sun finally made an appearance, so we bought picnic fixings in Ganges and drove around the island until we found a good lunch spot (it didn’t take long — you’re spoiled for choice there!)

The hotel provided a pet bed for Chloe’s use, but it was a little aged, and a little thin, and she didn’t show much interest in it. They also placed a small trash can outside our door, along with a supply of bags, which was useful and convenient. Happily, while I am amused and touched by pet amenities like a pet bed, bowls, and treats, I don’t look for them — as you know, we travel with sheets to put over beds and couches, pet bowls of our own, and plenty of treats. I count a place dog-friendly if the management is kind to Chloe (gear and treats are a way of showing kindness, granted, but it was enough for me that the Hastings House staff greeted her warmly) and if there are good walks for her. She loved the place — we kept her out of the garden, but she enjoyed rambling around the paths and into town.

The human amenities were right up our alley: A little bag of muffins arrived on our doorstep early in the morning, to tide us over (along with the surprisingly good in-room coffee) until the dining room opened for breakfast (like the rest of the food we ate at the Hastings House, breakfast was simply conceived, prepared perfectly from local ingredients, and served with kindness). You’re forced to fend for yourself for lunch, but a generous tea is provided to soothe your feelings, and then, of course, there’s dinner. 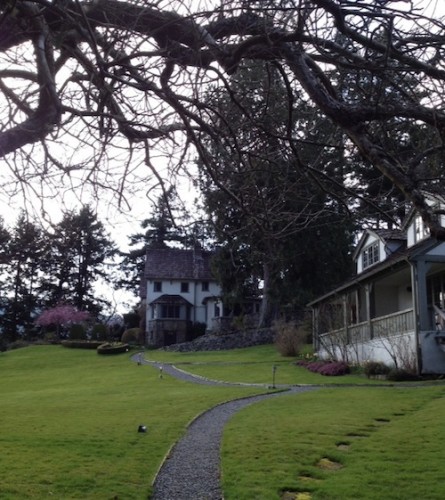 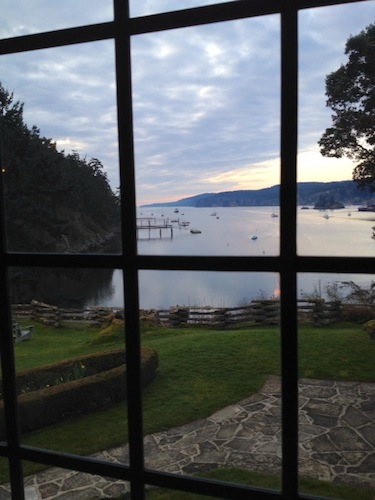 The view of Ganges harbor from the dining room (this is the same view, essentially, that our cottage had — you can see why arriving by seaplane would work just fine!)

I made dinner reservations at the hotel for the first night we were on Salt Spring, not knowing how far we’d be from alternative options. It turns out to be an easy walk into Ganges, and an even easier drive (I suggest driving, because part of the walk is along a highway — a modest, rural, island highway, so there wasn’t a lot of traffic, but still, I was a little uneasy without a sidewalk). Next time I would go into Ganges for dinner the first night (the Tree House Café was recommended by the local folk we talked to, and we were glad we took their advice), and save the fancier hotel dinner for the second night.

One other helpful hint: Foxglove Farm & Garden, not far at all from Hastings House, is a source of good-quality pet food and treats and supplies on the island.