There’s just so much useful stuff in the report loyal reader Heike sent me about picking up Seren, her new Havanese puppy, in Salt Lake City. She flew from Nashville, and they returned together, on a Delta CRJ-900, in First Class (here’s a seat map from SeatGuru for you).

Under-seat space on a Delta CRJ-900

Heike, no doubt relieved after mulling different carrier choices, led off with “There is room for the large Sturdibag!” Please note that while she sat in First Class, she took a good look at the under-seat spaces in Economy, and she comments on both. Here are the details:

“First Class has exactly the same space under the seats as the Economy class. The seats are fastened to the floor with the ‘universal’ seat rails system used for all classes — it’s just that the seats attached to those ‘legs’ are bigger (wider) in First Class.

Seat 4A (1 single seat) worked great for me since I traveled alone. The life vest under the seats steals about an inch or so in height (sorry didn’t have the time to actually look under the seat, the other passengers wouldn’t have been happy with me) so you do have to squish a little bit.  I think it may have been the external ‘ribs’ of the Sturdibag getting caught rather than the actual carrier being too big. I wish there was a way to place the ribs inside of the carrier!

Seats B + C share an under-seat space, but the aisle seat has a small extra space (maybe 8 inches or so — sorry, no measuring tape or camera ) between the seat leg and where the edge of the seat reached down to the aisle floor to stretch out your feet or at least a foot, not that you need it in 1st class. And you still have the regular under seat space where you can park the carrier.

If you’re traveling with somebody the doubled under-seat space of the B + C seats is a big plus! (You also have the same shared under-seat space in Economy class!) Traveling alone I’d go for the A seat, just because that way you’re not bothering anybody with the carrier in your lap during the flight.

Overall, I would say that both small and large SturdiBags should work under all the seats (First Class and Economy).”

And here’s a very helpful heads-up regarding your other in-cabin bag:

“One point of warning: The overhead bins on this plane are tiny! If your carry-on is on the bigger side (anything above a laptop bag or a smallish backpack) check it at the gate! You don’t want to stow your pup’s carrier under the seat and then discover the carry-on bag doesn’t fit in the overhead, because you’ll have to go back out (past all the people trying to get to their seats) and drop the bag off with the other ‘pink-slips,’ all while your pup is alone under the seat. (No, thankfully it didn’t happen to me. I saw how small they were on the way to Salt Lake.)”

The official pet relief area at BNA appears still to be the same one I visited, and jeered at, in September 2011. Heike ended up not going there:

“I couldn’t find a sign for the relief area. I asked a nice security person at baggage claim, who told me it was way at the other end of the (long) airport terminal and that there were some bushes and a bit of green just across the road from the baggage claim area and right in front of the parking garage where the car was parked. We opted for the fast option since Seren had been an awesome puppy and hadn’t had an accident in the carrier.”

It’s good to know about that alternative, because some pups don’t respond well to Astroturf and the grassy plot Chloe and I found in 2011 takes a little while to walk to. If I weren’t in a hurry, I’d opt for the leg stretch; otherwise, I’d seek out the spot Heike found.

SLC turns out to have six pet relief areas, shown on this map of the airport. Three are on the land side of security, and Heike and Seren visited “the middle one, closest to the rental car area:”

“It was the easiest to find because it’s right across from the check-in area and because of the big signs directing you toward the car rental. Just walk out the door (of the rental car area) and down the sidewalk. It’s not the small patch of grass right outside the door, which will work in a pinch if you carry your own poop bags. Or from inside the terminal, you can brave the traffic and walk across the road, bypassing the sky bridge. 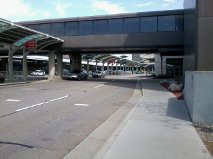 Heike took this photo from the pet relief area, looking back at the skybridge and the door to the car rental area (on the far right). Terminal 2 is to the left.

The relief area has grass, gravel, bushes, walls, rocks and even a fire hydrant for those pups that just have to have the right kind of motivation. Sadly it is right next to the road, so PLEASE! watch those pull-out leashes! What it lacks and (from what I saw) what the other spots lack too, is a fence and a place to sit for the humans. The shade is so-so, we are talking about Salt Lake City! ‘Our’ spot had no shade at 3:30 pm, but there should be some in the morning.”

Standing in pretty much the same spot from which she took the picture of the skybridge, Heike turned around and took a couple of pictures of the middle land-side pet relief area: 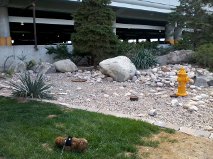 That must be Seren in the foreground! 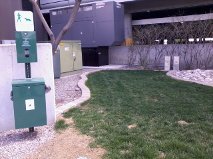 So why not just use one of the three spots on the air side of security? Unusually, they turn out to be not in the terminal building (as they are in Dulles, San Diego, and Seattle), but rather outside by the parked planes. You need an escort to visit them, and it sounds like you need to arrange that in advance: “For passengers with a tight connection, the ramp side areas by the concourses are an option for a necessary break, but it is a gravel area and will require an escort. Please contact SLC Airport Operations at 1-801-575-2401 or contact an airline representative for escort to the pet relief areas located near the concourses.”

Perhaps you could ask the gate agents as you deplane? I suspect it would take them some time to organize an escort for you, but it also takes time to exit the airport, find one of the outdoor pet relief areas, and return through security. If one of you manages to visit an air-side pet relief area at SLC, please let us all know how the process works!

How the flight went with new pup Seren

The evidence suggests that Seren is going to be an easy traveler: “Seren flew like a pro! Once we were up in the air she slept the whole flight, not even the bumps from a storm front bothered her. You have no idea (…or maybe you do)  how happy I was about that 🙂 [Editor’s note: Yes indeed, I do!]

Heike encountered kind fellow passengers (“The people at the gate were all going oohh and ahh over the cute pup wagging her tail at them in her carrier, which is always good for public relations”) and a kind flight crew:

“l had the carrier on my lap (almost) the whole flight with my hand tucked inside cuddling Seren (more for my own comfort then hers since she was sleeping lol) . The carrier was safely stowed under the seat at the start/landing and when it got bumpy from the storm. The stewardess was very nice, she came by several times to ask how the puppy was doing and if I needed anything for her. Got to love 1st class!”

Thank you so much, Heike! How much you noticed and how kind you are to pass it on to me and other travelers with pets! I am adding this post to Dog Jaunt’s handy guide to airport pet relief areas and to Dog Jaunt’s ongoing series recording under-seat plane measurements.