Reader Gail has brought us so many great photos, including two on the blog of Puccini, her Cavalier King Charles Spaniel, vacationing in Italy. At the beginning of April, she sent in two scoop law signs from Portofino and Sorrento, and now they’re joined by one from Lucca: 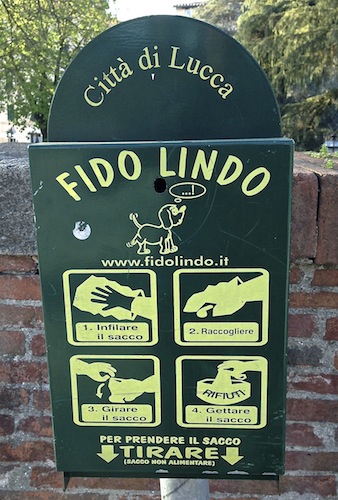 Gail saw this sign while she and Puccini “were out for our first passeggiata” after arriving in Lucca — how I envy her!

“Fido Lindo,” it says (or “Tidy Fido”), and indeed, there the pup is, giving some brisk kicks to clean up after himself.

I had initially typed “cheerfully giving some brisk kicks,” but Gail drew my attention to the dog’s speech bubble. Part of the problem may be his nose, swollen for some unexplained reason and no doubt sore, but I suspect that he’s cursing his absent owner, who should be there following the series of instructions and diagrams (“Insert in bag,” “Pick up,” “Turn the bag,” and “Throw the bag away”).

And in case you were wondering, those poop bags? “Non alimentare” — that is, not designed for use with food.

Thanks so much, Gail, for the pictures and the translations — I am loving all the signs you’ve been posting on Dog Jaunt’s Facebook page. If you want to see the others in the collection, click on the “scoop law” tag below this post, or type “scoop law” in the search box.