I posted this on Dog Jaunt’s Facebook and Google+ pages before it occurred to me that it’s Friday, and I should be posting it here! I hardly ever drive north across Seattle’s Fremont Bridge, and I’d only seen the statue “Waiting for the Interurban” from the front. That’s entertaining enough, because the group of sculptures is often dressed seasonally — right now, appropriately, they’re wearing warm hats and rain jackets. From the other direction, though, you can tell that the group includes a dog: 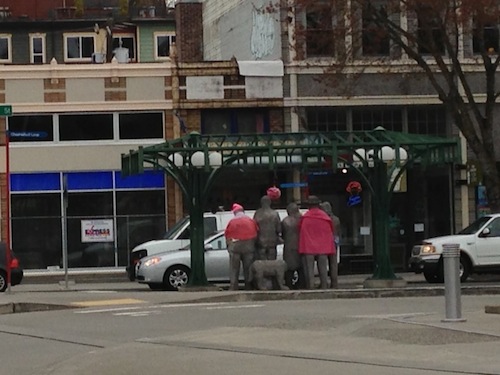 Photo taken by my husband from a distance and under trying circumstances. Thanks, sweetie!

That’s right and proper, because Seattle is one of those rare cities where leashed dogs (as well as small pets in carriers) are allowed on public transit. The Seattle-Everett Interurban, an electric railway, reached the end of the line in 1939 [PDF], but the statue commemorating it is one of the pillars of Seattle’s offbeat Fremont community (along with a concrete troll that lives under the Fremont Bridge, a space ship, and a gigantic vintage statue of Lenin).