Memorial Day is coming up (this year, it’s on May 27). Too often, U.S. cemeteries are off-limits to pet dogs (Arlington National Cemetery is a notable exception), but you and your pup can pay your respects in a different way — by visiting a battlefield together. This particular post was triggered by an article in the current issue of Smithsonian magazine about the restoration of the Gettysburg battlefield. Trees that weren’t there in 1863 have been removed (along with a hotel, observation tower, and a Stuckey’s restaurant); orchards that were have been replanted; and snake fences that criss-crossed the battlefield have been rebuilt. 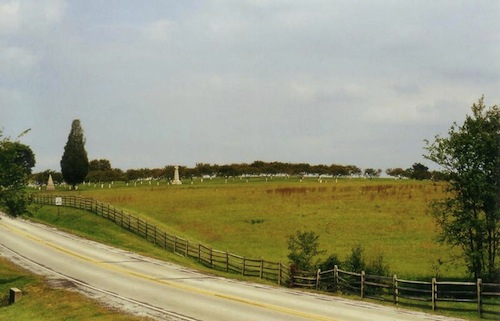 I find battlefields both intellectually stimulating and deeply moving. Military strategy and troop movements are fascinating enough in a (well-written) book, but there is nothing like being where the events described in that book took place and understanding, with your own eyes and feet, how the terrain participated in the battle. And while battlefields are deserted, and often beautiful, places now, they still shriek and jangle with the strongest of emotions.

I totally get it if you’re looking at this page with perplexity. Not too long ago, my husband and I visited, in quick succession, the battlefield at Chickamauga and the U.S. Space & Rocket Center in Huntsville, AL. He’s from Chattanooga, and had ancestors who wore grey; I love the history of the Mercury and Apollo space programs. And yet he was ready to call it a day after about half an hour at Chickamauga (while I viewed the moon rocks with interest, but without reverence). But if you, like me, have thought, heck, wouldn’t an entire vacation visiting Civil War battlefields be terrific, read on.

Generally speaking, leashed pet dogs are allowed on U.S. battlefields, but not inside any related structures. The Gettysburg battlefield is one example (its pet policy page is unusually detailed), and so is the Shiloh battlefield I wrote about back in 2009. There aren’t any buildings to worry about at Chickamauga, or at Yorktown (which we visited this past Christmas). How about other famous U.S. battlefields? Here’s a short list, with links to their pet policies:

Minute Man National Historical Park (Lexington/Concord, MA) — Where the “shot heard round the world” was fired on April 19, 1775

Harpers Ferry National Historical Park (Harpers Ferry, WV) — There are many layers of history here, but since this is a post about battlefields, I should highlight the September 1862 Battle of Harper’s Ferry, where Confederate forces under Stonewall Jackson rolled up the Union garrison. The old town of Harpers Ferry is, essentially, the battlefield, and it’s a delightful place to visit. A half hour’s drive will bring you to the Antietam/Sharpsburg battlefield, where, just two days after the Harpers Ferry fracas, the Union and Confederate armies mauled each other.

The Battlefields Park (Québec City, Québec) — How silly it would be not to extend the focus of this post over the Canadian border to this beautiful park, site of, among other things, the September 13, 1759 Battle of the Plains of Abraham, a dramatic turning point in the war between France and England.

Please note that I haven’t included several important sites because their pet policies restrict visitors to less interesting areas (at Fort McHenry, for example, pets “are welcome on the fort grounds, but not in the historic area…defined by the wooden fence which surrounds the fort”), or ban pets altogether (e.g., Little Bighorn Battlefield, The Alamo, Fort Sumter, Pearl Harbor). I’ve left out tons of battlefields, however, through ignorance and oversight — if you have a favorite that welcomes pet dogs, please let us all know about it in a comment!

Please also note that battlefields are more often than not open spaces, and in the summer you and your pet will be flailed by sun and heat. Not being allowed inside battlefield buildings means that the only shelter you can count on is shelter you bring with you — wear a hat, bring sun protection for yourself and a cooling jacket for your pup, and carry lots of water. If you can, visit with a friend, so one of you can dash inside and view the interpretive exhibits while the other keeps your pup company (and then vice versa). Be sure to bring your own poop bags, and not only out of concern for the environment/wildlife — these are battlefields, where people died and were grievously hurt, and it shows respect to pick up after your pup. And as many of the sites point out, heavy grass cover harbors ticks and other wildlife. Be cautious walking around out there, dose your pup with Frontline Plus, and check everyone for stowaways when the day is over.