After (naturally, after) the last time I visited the Queen Mary, a glorious Cunard ocean liner that sailed from 1936 to 1967 and is now permanently moored in Long Beach, CA, I found a site that provides the original deck plans for the various levels of the ship, along with plans of the ship as it’s now configured. I noticed that the Queen Mary’s dog kennel was located on the Sports Deck, just in front of the second funnel:

Original plan of the Queen Mary’s Sports Deck (detail of the area below the second funnel, at left, forward to just behind the first funnel)

These days, the Queen Mary 2 is the only cruise ship that allows pets on board — but as on the Queen Mary, your pet must live in the ship’s kennel for the duration of the voyage. My colleagues at The Road Unleashed wrote a couple of great, detailed posts about how that works, and indeed, it sounds like it works pretty darned well, all things considered.

I wanted to see the kennel on the older ship, or at least see where it had been, especially since many of the glamour shots of the ship’s heyday are of celebrities traveling with their dogs [for example, do an Images search on Google for “windsor ‘queen mary’ ship dog,” and you’ll see a couple of (copyright protected) pictures of the Duke and Duchess of Windsor sitting on the steps of one of the ship’s staircases, with two of their Pugs]. The TED conference brought us back to Long Beach, and today I stuck Chloe in her stealth messenger bag (dogs are not allowed on board, but the self-guided walking tour is largely outdoors, so I did not anticipate that she’d cause anyone any trouble at all), and made my way to the Sports Deck. Here’s a plan of what that part of the ship looks like now: 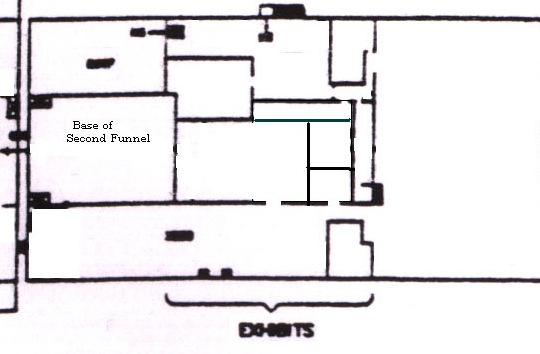 The closest I could get was to walk down the little service hallway in the upper right corner of the plan and peer through a hole in a locked access door. Through it, I could just see the little courtyard (on the original plan, it’s the area where the words “Lift motor house” are written) and the door of what was the dog kennel — now, apparently, a room with High Voltage in it. 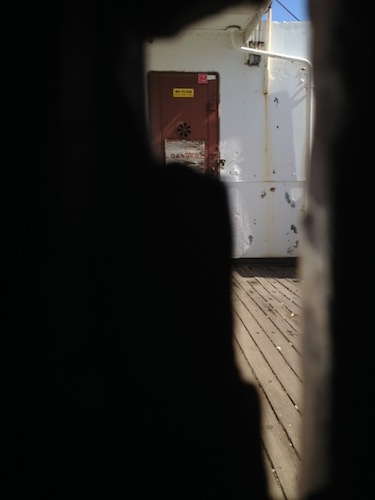 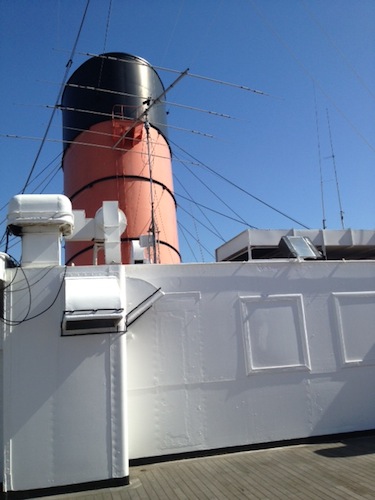 I’m standing just off the center-line of the ship, facing aft (with the first funnel behind me). That’s the second funnel, and that wall separates me from the former squash court and dog kennel (as you can see on the original plan, those two blocked windows used to provide a view of the squash court). The little service hallway leading to the dog kennel is to the right, just out of picture.

So much for my plans to take a quick, forbidden picture of Chloe in front of the old dog kennel! I loved the sleuthing, though, and it was a perfect SoCal day, so no tears.