I’m not even going to tell you how long ago reader Natalie wrote to me with this excellent report. Let’s just say that earlier this year she and Stanley, her year-and-a-half-old Cockapoo, flew on American from Boston to Key West, with a layover and a plane change in Miami. She kindly shared detailed information about some key aspects of her trip (her first-ever with Stanley!), including her check-in experience with American; the under-seat spaces on the Boeing 757 and American Eagle AT7 planes they flew on; a pet relief area at Miami International Airport (MIA); and how she handled a pet policy change at her hotel.

Natalie noted that Stanley is “on the larger size for in-cabin airline travel which caused a bit of anxiety for me but we encountered no problems whatsoever during our travel. I used the large Sturdi bag per your suggestion and it was perfect. He weighs about 17 lbs so with the bag the scale at the airport read 19.5 lbs.” Please note that Stanley and carrier were put on a scale — which doesn’t often happen. In this case, all was well, since American’s maximum weight for an in-cabin pet is 20 lbs. (total — pet plus carrier). 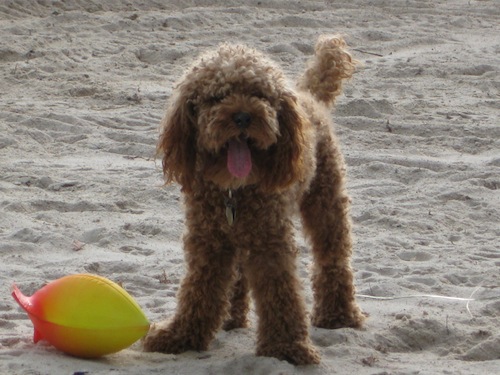 Stanley on the beach. “My biggest concern,” Natalie wrote, “is that Stanley is tall.” 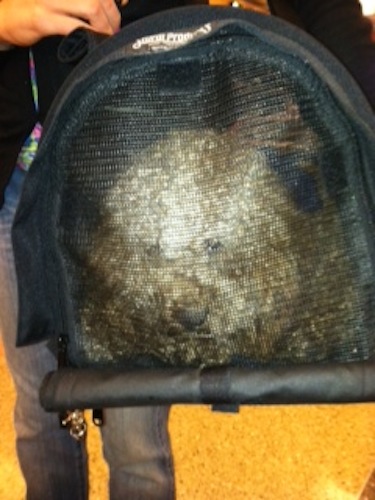 “He has very long legs so the height of the carrier was concerning. Stanley is able to turn around in the carrier, but it is tight.”

Under-seat space on an American 757 and American Eagle AT7

As Natalie mentioned, she bought a large SturdiBag for Stanley. “We flew Boston to Key West with a layover in Miami. Stanley’s carrier fit fine under seat in both the Boeing 757 aircraft and the much smaller American Eagle AT7. The flight attendants allowed me to keep Stanley’s carrier on my lap during much of the flight. Actually I only had to put the carrier under the seat in front of me during one segment of our journey (which I do understand is against airline safety policy) — in the other flight segments he could remain on my lap even during take off and landing.” 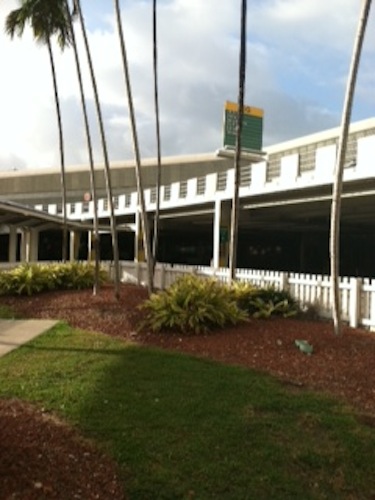 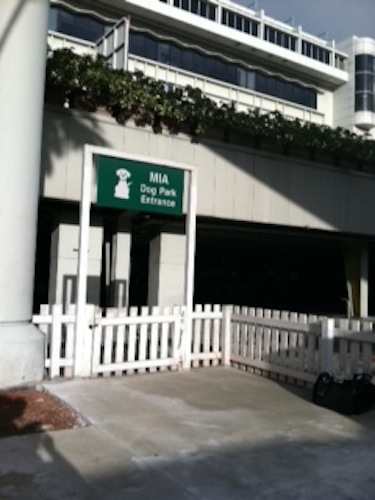 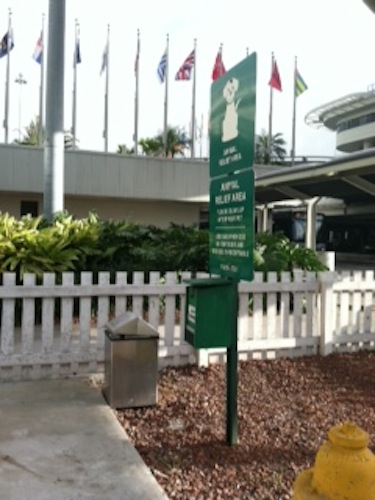 The Concourse E pet relief area is in the center of this Google Maps view; it appears that you reach it by exiting the terminal through the doors nearest baggage claim carousels 12 & 13 and crossing the airport roadway: 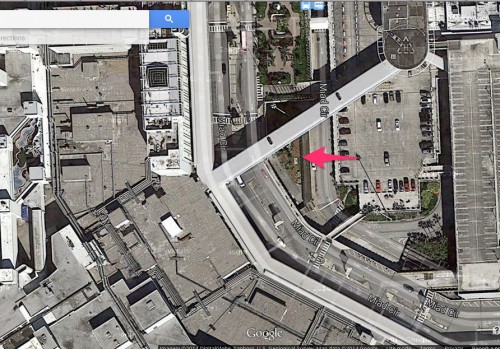 The arrow points to the Concourse E pet relief area

I don’t know which Hilton/Waldorf-Astoria hotel Natalie and Stanley stayed in — there are a couple in Key West, the Casa Marina and The Reach — but Natalie’s forethought helped her handle an unexpected change in her hotel’s pet policy:

Excellent advice, which I’ll be following myself from now on. Thank you so much, Natalie, for the advice, the pictures, and for sharing the important details of how your first trip with Stanley went. I was thrilled to hear that “Overall, our first flying experience went very smoothly and everyone we encountered with American Airlines was friendly” — and even more thrilled to hear that Natalie was already planning an autumn trip to Italy, with Stanley.