I first heard about the RUNNUR pack in an e-mail message from Fido Friendly magazine, way back in May, and I wrote to the company asking for a sample to review. The product is not specifically meant for dog owners (it’s created, says the company, for “People on the Go: Bike, Skate, School, Work and Travel”), but as you’ll see, it’s an appealing option for dog walkers, laden as they are with poop bags, phone, water bottle, treats, etc. RUNNUR kindly sent me one, and now I’ve had a chance to try it.  I have not been paid for this review, and I did not promise (and RUNNUR did not request) that it would be positive. Although the pack costs less than $50, I will be giving it away to one lucky Dog Jaunt reader (total value: $39). I’ll provide the giveaway details in a separate post on Tuesday, October 30, 2012. 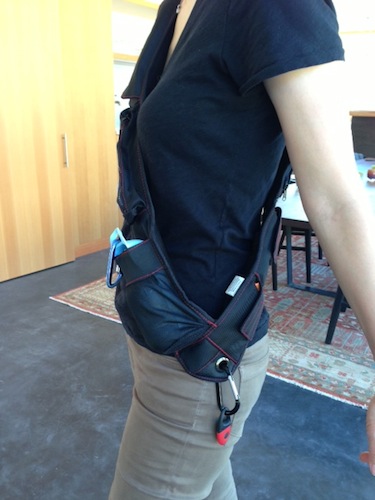 The pack consists of a wide nylon twill band, covered with pockets and sewn into a loop that slips over your head. It can be worn over either shoulder — I chose to wear it over my right shoulder, since that positions the water bottle pocket handily in front, over my left hip. It ends in a large, sturdy grommet holding a carabiner, which someone walking without a pet might use to hold keys or a variety of useful clip-on items (umbrella! hat! collapsible seat!) — I look at it, though, and think of clipping Chloe’s leash to it while I buy a coffee, or pick up poop.

I’m getting ahead of myself, though. The company (per a letter to their customers) wants you to start with the water bottle pocket, which “creates an anchor for the strap: a 16 or 20 oz. bottle is the first thing that should go on strap.” Being a perverse person, I deliberately chose to start with Chloe’s other gear (roll of poop bags, my iPhone, her folding raincoat, a mini-flashlight, and a wad of treats), and the result was fine — but when I added the weight of Chloe’s full Gulpy water bottle, the pack did indeed settle more comfortably on my shoulder. (I dislike wearing objects that dangle from light, thin shoulder straps, as you may know from comments I’ve made in previous product reviews, but there’s nothing dangly about the RUNNUR pack.)

There were plenty of pockets for gear. I put Chloe’s folding raincoat in the pocket concealed on the inside of the strap (her raincoat is hardly precious, but that pocket was the right size, and in the right location), her poop bags and treats in the camera/snacks pocket, and my phone in the eyeglasses pocket. That left me with three unused pockets, which turns out to be a fair amount of real estate. I clipped the mini-flashlight I use for locating poop in the dark on the carabiner, where it could also function as a hazard light (one of its settings makes the light flash); in combination with the pack’s sewn-on reflector strip, that would improve my dusk/night-time visibility.

Here’s what I liked: The product is attractive (I chose the black with red stitching, but it’s also available in black with black stitching, natural, ballerina pink, kelly green, grey, and plum) and solidly constructed. I hesitated wearing it all summer, but I think I’d have been fine — the inside is lined with a mesh that keeps the air circulating by holding the pack slightly away from your body. I dislike how hip packs drag at my waistband, and I dislike the look of a hip pack (no matter what I call it, it’s still a fanny pack, and it still looks silly). The RUNNUR has more urban chic than a fanny pack, and it does a nice job of tucking your gear in close to your body, keeping your arms free to move around with your dog’s leash. It is more comfortable to carry a large-sized Gulpy bottle in the RUNNUR than it is in a fanny pack, and it was very nice to have that extra water available (for me and for Chloe).

Negatives? It vexed me a bit to use only a handful of the pockets — a dog walker has a certain amount of gear, but not as much as the RUNNUR pack can hold. I think, though, that that’s just a quirk of my personality. The unused pockets add very little to the weight of the product, which is under a pound. Unlike the Tom Bihn Canine Citizen, another pack I’ve admired this year, the RUNNUR pack has no solution for a ChuckIt! ball or stick — but it’s also half the price of the Tom Bihn bag (and, indeed, it’s hardly fair to compare a general-use pack with one that’s designed specifically for dog walkers).

One last note: The RUNNUR pack comes in a variety of sizes. I’m 6’0″ tall, and an average build (I’d like to say slim, but that’d be pushing it). I chose the Medium size, and it fits very comfortably.