Back in 2009, I reviewed the large-sized Bergan Comfort Carrier (it also comes in small), and concluded that it was well-designed but poorly made — it’s inexpensive, so it would be a reasonable choice for a trip or two, but not my pick for repeated use. At 19Lx10Wx13H, it also seemed perilously large for in-cabin use — but reader Kristin bought it for Tater, her Yorkie, and used it very successfully on Southwest (Boeing 737) and American (MD-80) flights between Long Island and Palm Springs earlier this year (okay, way, way earlier this year — I’m so sorry, Kristin!).

Tater in (well, mostly in) his large Bergan Comfort Carrier

Kristin kindly sent photos of the carrier in use, and here they are:

Kristin prefers “the aisle seat because I can place my purse/bag in the overhead compartment and it is easy to get to. I can also have a good visual and [patting] access to Tater.” She tried a window seat too, and here’s the picture: 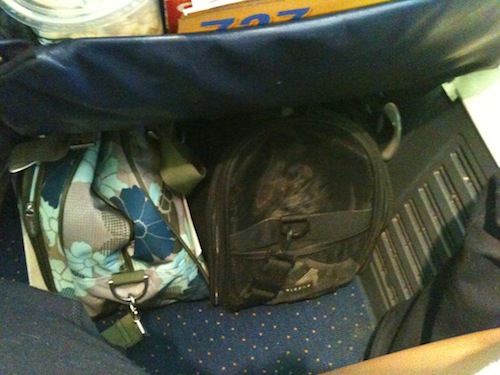 Kristin reports that “the window seat has the most room to fit a carrier and a carryon bag. Or you can use that extra space for leg room. ”

She had an aisle seat on her American flight (they were on an MD-80), and the carrier worked in that space too: “I like the aisle seat also on American because the aisle seat has its own space under the seat (the middle and window share the space under the seat, with no bar separation). In this seat, there is also enough room for one leg to stretch out!” She sent two pictures from this flight, from different angles: 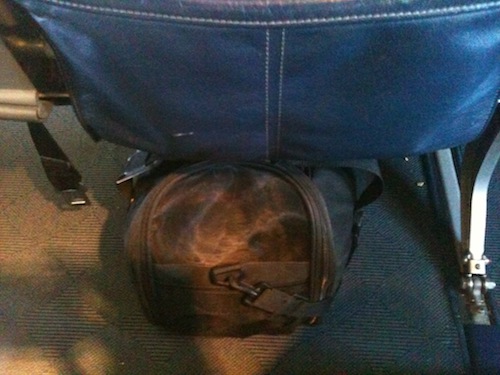 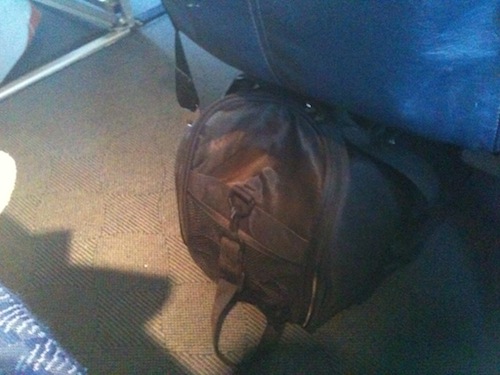 Thank you so much, Kristin, for your pictures and for your report! I was nervous about how the carrier would work in-cabin, but your pictures show that on the right planes, it’s a very workable choice. (Kristin did say that that the carrier was a bit tippy: “The only complaint I have…is that it could tip over when placed on the ground and your dog moves around and changes positions. But all in all it was a good fit for the plane.”) Seeing these pictures will help other readers make a more informed choice, and having access to them might help them convince a concerned ticketing or gate agent that the carrier will fit nicely on board.