Reader Mia recently took two trips on a Delta CRJ-200 (50 seater, two seats on each side of the aisle) with Callie, her cockapoo. Callie’s the same height as Chloe, but a little lighter — she’s 12″ tall at the shoulders, and weighs 9 lbs. Mia used their large SturdiBag for the first time on these two trips, and it worked well (more about that below). She sent me a report that I’m going to break into two posts — today’s describes the under-seat space available on her flights, and her experience with Delta.

I made an in-cabin pet reservation on the phone when I booked my flights with Delta (I looked up the flights I wanted online, called to check there was in-cabin space, booked online and then called back to reserve). Delta doesn’t allow online check-in for those with an in-cabin pet reservation on file, which I didn’t know until I went to check in for my flight, which was very worrying at first, since I did not have an assigned seat on either of my flights (that is what last minute holiday booking gets you!). I called Delta in a panic, and I was able to book a preferred seat for my first flight over the phone paying only the same $9 I would have paid online. Thank goodness as, it turned out, the window seat had about 1.5-2 inches of less width space for the carrier.

During check-in at the Charleston airport, the Delta agent didn’t even look at Callie’s carrier before having me pay for her and issuing me their green in-cabin pet tag. He was the friendliest airline agent I have EVER met, and gave me a preferred seat on my return flight for FREE, so I was in a row 2 aisle seat going out and coming back.

On the plane, Callie’s carrier fit with a little compression (as you will see from the pictures), so I would say the under-seat space is 11.5 inches tall. Like I mentioned, the window seat has a ledge that juts out, which reduces the space on that side width-wise by about 1.5 to 2 inches. Since the under-seat space is undivided though, it won’t really matter, as long as you have no seat partner, a cooperative one, or one without under-seat luggage. 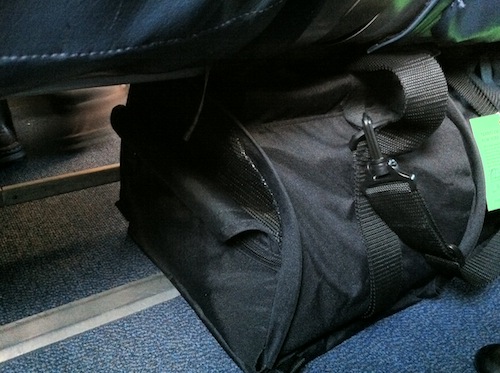 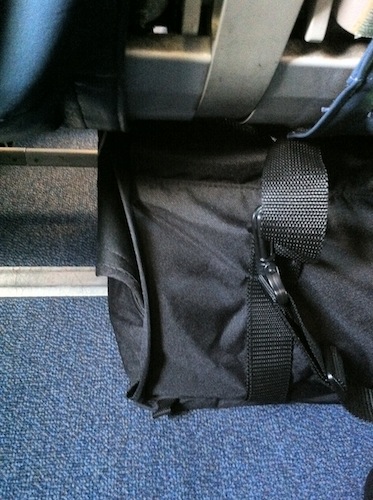 On my return flight, my neighbor had a very large (over-sized if you ask me) under-seat bag which actually protruded into my under-seat space, creating a bit of a problem since the only non-flexible part of the Sturdi is width/length. Luckily, I was able to turn Callie’s carrier lengthwise, and it still fit under the seat enough as to not gain any objections from the flight attendant. The pictures shows pretty accurately that it stuck out an inch or two, but not unreasonably so. 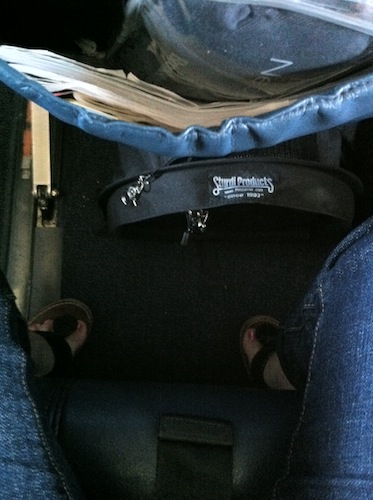 I can’t tell you how many pictures I’ve taken that look just like that last one — how other passengers must wonder! The first two pictures in particular highlight how useful it is that the top and sides of the SturdiBag flex. Here’s what Mia says about their new carrier:

We used our large SturdiBag for the first time and she loved it! It is much better made than our former carrier, a medium Sherpa carrier. My favorite parts are, of course, first how flexible it is, not only for under-seat storage reasons but because the flexibility against one’s side makes it more comfortable to carry, which brings me to my second favorite part, the four point straps with shoulder pad, which are a life saver when carrying my pup a long way through the airport. Callie’s favorite parts are the inside height which allows her great turning-around room and the fantastic cushy pad on the bottom.

And nope, Mia doesn’t get a kickback from SturdiProducts either. Thanks so much, dear lady, for providing such great details and pictures! Hopefully other travelers can use them not only to make their own plans, but also, if they have a similar carrier, to show a concerned airline agent that their pup will indeed fit in the available space.