I had never heard of the Drury Hotel chain before this Christmas. I just knew that I had to spend two separate nights near the Nashville airport, and when I looked at the pet-friendly hotels in the area, the Drury Inn & Suites was not only top of the list, but it also ranked #4 of 143 hotels in Nashville.

I have to admit, it doesn’t look like much as you’re arriving. It’s in a row of modest, airport-type hotels (La Quinta, Embassy Suites, Red Roof Inn, Hampton Inn & Suites, Holiday Inn Express), all of which look exactly the same. But God’s in the details, as they say, and this particular Drury Inn, at least, pleased at every turn.

First of all, it was no more than 5 minutes away from the airport. The lobby was inviting (and indeed, gathered people in sociable groups), and the property was well-maintained. 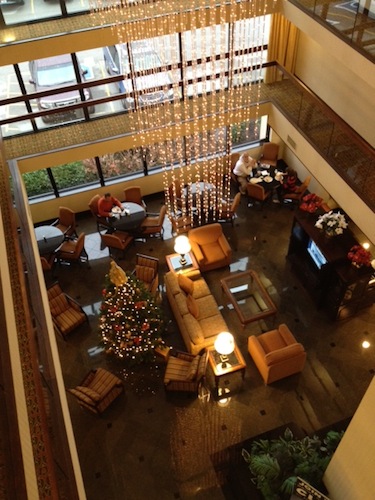 Our room was nothing special — if you’ve been in any of the other hotels listed above, you know what to expect — but it was spotlessly clean. The entire staff, from front desk to housekeeping to the maintenance guy, fell to pieces over Chloe. There was no pet fee, no charge for wi-fi, and no charge for breakfast (which was basic, but hey, it was there). There were drinks coupons. There were hot drinks and popcorn at all hours. The free hotel shuttle whisked me to the airport for an early flight.

I’m not saying the place is perfect. The walls are thin, and on our first stay we were kept up until the wee hours by noisy hall-mates. When the front desk couldn’t shut them up, though, she refunded the entire price of our room — we would have preferred the sleep, but a free room (and free without a fight, or a fuss) was an acceptable alternative. On our second stay, our room was located over the lobby — and directly over the popcorn machine, which was disturbing in a different way (I love popcorn, and the smell of fresh popping is torture for a gal on a diet).

Other details you should know: The hotel is on a major thoroughfare, so there isn’t an obvious place to exercise your dog. There is a large lawn in front of the hotel for bathroom breaks (bring your own poop bags out with you), but we ended up driving to a local marina to stretch Chloe’s legs. The dining options in the neighborhood are limited, but we had a pleasant meal at — brace yourself — the Bar-B-Cutie down the road.

Based on this experience, I would seek out Drury hotels in the future. If you look at a map of their locations, you’ll see that there are a boatload of them in Missouri and Texas, and others in nearly all of the southern states, the Midwest and Upper Midwest, and in New Mexico, Colorado, Arizona and Kansas. If you’ve stayed in other Drury hotels with your dog, please let me know what you thought of your experience!