Chloe and I stayed this past weekend at a new Kimpton hotel, the Grand Hotel in Minneapolis. I should mention that I paid my own way at the Grand Hotel — I’ll always let you know when something I’m reviewing has been paid for by someone else. I didn’t know quite how new it was until I inquired, on check-out, but I’d had my suspicions from the beginning. It has the Kimpton quirky chic in only a few places — really, in fact, only in the lobby bar. Apparently the new management is working its way upwards, renovating the guest rooms, and the plan is to keep the quirkiness under control — the Grand is a stately hotel, with a big athletic club component (which hotel guests have access to), and the Kimpton decorators plan to choose furnishings that play up its traditional feel.

My room, high in the hotel, was solidly traditional, and a little dated: 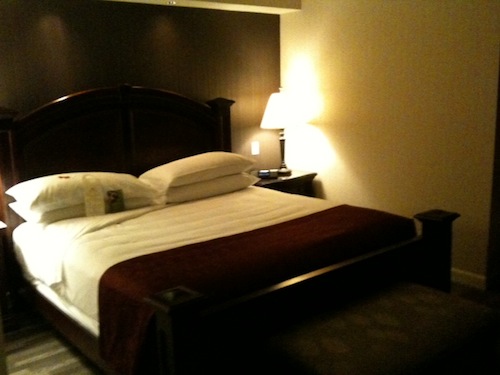 The bathroom, however, was huge and appealing: 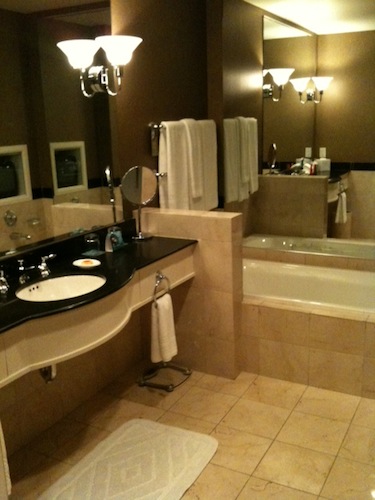 It was stocked with good toiletries and stacks of towels, and the shower was outstanding — great water pressure, and instant hot water.

This is the first Kimpton hotel I’ve encountered that didn’t have a chalkboard in the lobby, listing visiting pets’ names, nor was there the usual Kimpton water bowl by the front door. However, the staff fell over themselves patting and praising Chloe, and nearly every staff person went out of his or her way to help and welcome me. Highlights included a front desk person who raided the staff first aid kit for a Band-Aid for me (when will I learn not to travel with new shoes?), and David, the evening front desk person, who made it his personal mission to find my misplaced car rental key.

Because I signed up for Kimpton’s InTouch guest loyalty program (which I recommend — it’s free, and they don’t heckle you with relentless e-mails), the wifi was free, and they gave me a $10 “raid the minibar” coupon. I had room service one evening, and my Greek Salad with grilled chicken was fresh and good, and featured plenty of feta cheese (chintzing on the feta is one of my pet peeves). Valet parking was pricey, and really, I shouldn’t have rented a car. Next time, I’ll take the light rail from the airport to the hotel and then take taxis to see my family in St. Paul.

The hotel is very much downtown, but there are a couple of good, nearby places for bathroom breaks. Turn left out of the hotel, left at the corner, walk to the next corner, and cross 3rd Ave. S. Directly ahead you’ll find a well-lit park with plenty of grass (bring your own poop bags). Across 7th St. S., to the right, there is also a big lawn in front of the Accenture building, but it’s not as well-lit at night.