LAX has five [now four, per reader Kate’s report (see below)] pet relief areas, and when we visited sunny SoCal last week I spent an afternoon visiting them all. Here’s what I’ve learned — and here’s a map of LAX to consult. 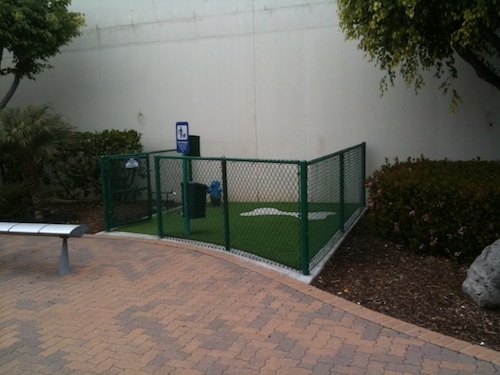 The pet relief area between LAX terminals 1 and 2 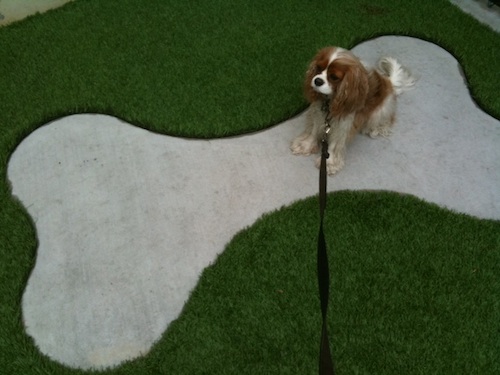 Chloe and the concrete bone

The area is small but clean. Poop bags are provided. Chloe approved enough to pee in it, but if your dog is opposed to Astroturf, your best alternative is to cross the airport roadway and walk past the Bob Hope Hollywood USO to the futuristic Theme Building beyond (currently the home of the Encounter restaurant and bar). There are some lovely patches of lawn underneath it — be sure to keep them lovely by bringing your own poop bags with you.

Between Terminal 3 and the Tom Bradley International Terminal 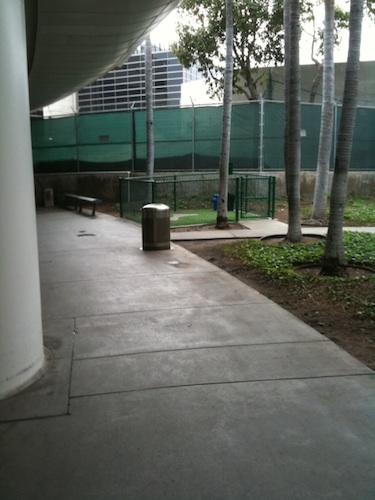 The pet relief area between Terminal 3 and the International Terminal, seen approaching from Terminal 3

The best alternative to Pet Relief Area #2 is across the roadway — there are several attractive bits of lawn in front of the parking garages.

Between the International Terminal and Terminal 4 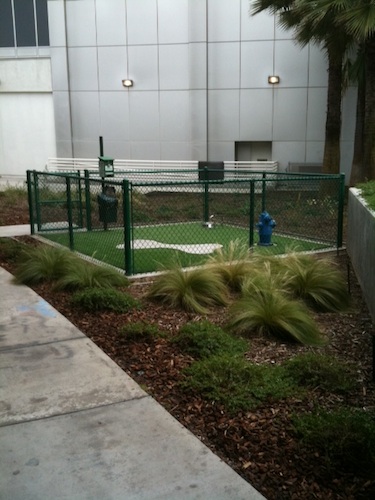 Here too, the best alternative are the small patches of lawn across the airport roadway, in front of the parking structures. Here’s what those patches look like from the official pet relief areas: 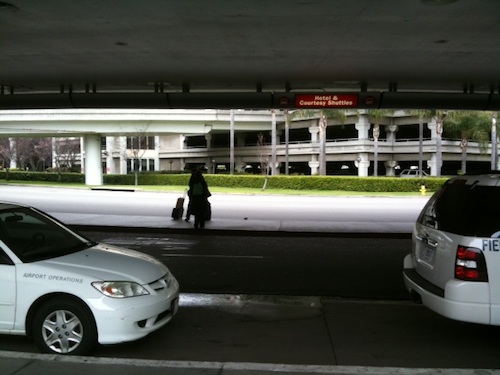 This pet relief area is sometimes described as between Terminals 5 and 6 — in fact, however, it’s across from Terminal 5. If you arrive at Terminal 6, exit the baggage claim area and turn left. Look in the windows of Terminal 5 and locate Baggage Carousel #1 — using the crosswalk directly outside Baggage Carousel #1, cross the airport roadway and turn left. The pet relief area is located between the two parking structures, in a stand of palms. It looks so much like the three you’ve already seen that I didn’t bother to take a picture.

Your best alternative to this pet relief area (again, assuming your dog dislikes Astroturf — otherwise, there’s no reason not to use the official pet relief area) is the small patch of grass that surrounds it.

At the end of Terminal 7

[3/29/13 Reader Kate reported today on Dog Jaunt’s Facebook page that this pet relief area is now closed. It cried out for closure, I told her, and she agreed — but she misses the poop bags. If you are flying into/out of LAX on United or United Express (the airlines using Terminal 7), be sure to equip yourself with your own poop bags, and look for the alternative grassy area I mention below.]

This pet relief area is sometimes described as between Terminals 7 and 8, but for the life of me, I couldn’t see a Terminal 8. You’ll find the official area at the end of Terminal 7 (exit the baggage claim area and turn right). As you can see from the picture, it looks very different from the other four pet relief areas, and it turns out to be the original, lone LAX pet relief area. Frankly, it’s nasty. There are poop bags, and there is a water spigot and bowl, but once you’ve grabbed a poop bag and given your dog a drink, I’d go across the roadway to the grassy area under the curve in the overpass (you can see it in this picture, just behind the yellow arrow sign). 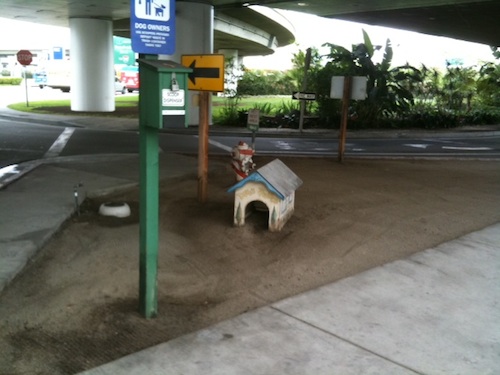 The dog house should be charming, but it creeped me out. Also, the dirt? Not appealing.

I’m really glad that LAX added the four other pet relief areas I’ve described, because they’re all a vast improvement over this one — as I mentioned above, they’re pleasant enough that the only reason I can see for you to try the alternatives I’ve suggested is if your dog just will not pee or poop on Astroturf. I’m grateful, too, that LAX now has pet relief areas sprinkled around the arrivals level, because it’s a long walk to the end of Terminal 7. Now we have to hope that the airport’s next step will be air-side, indoor pet relief areas, like the ones at Dulles.