I arrived at IAH last week on a Continental flight from Seattle, and landed at Terminal C. I wasn’t traveling with Chloe, for once, but I had enough layover time to check out a couple of pet relief areas. According to IAH’s web site, there are pet relief areas at all but one of the airport’s five terminals (Terminal E is the exception). In reality, however, there is no pet relief area for Terminal C, so ignore those directions — the folks at the Terminal C information desk agreed that the web site was misleading, but handed me an airport map with the pet relief areas marked on it, and sure enough, there was no icon for Terminal C.

I decided first to find the nearest official pet relief area, which is in Terminal D. If you’re arriving at Terminal C, exit to the Baggage Claim level, then follow the signs to the toy-sized Inter-Terminal Train and head to Terminal D. When you arrive, go upstairs. Follow the signs to Emirates airline. Exit the terminal directly across from the Emirates counters. This sign is above the door: 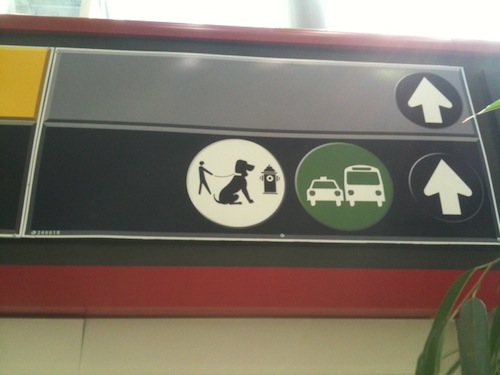 When you emerge, turn right and you’ll find one of Terminal D’s two pet relief areas. As you can see, it’s an unfenced patch of grass. Poop bags are provided. 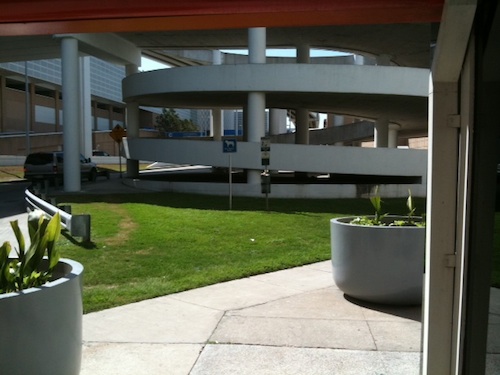 I didn’t have time to visit the pet relief area at the other end of Terminal D, but I’d bet money that it looks much the same.

Between waiting for the Inter-Terminal Train and schlepping up and down the various levels of the airport, it took a good deal of time to reach Terminal D and return to Terminal C, where my flight to Tampa was departing from. I looked for alternatives. One would be taking the Inter-Terminal Train in the other direction, on a marginally shorter trip to the airport Marriott, which is rumored to have grass around it (aerial maps confirm the rumor).

However, the Marriott is really only about 200 yards closer than Terminal D to Terminal C. As I sadly approached Terminal C’s security point, I was thrilled to see (from the security area’s second-floor windows) a patch of grass outside Terminal C. I spun around and went back downstairs to investigate.

To reach the grass I saw, find baggage carousel 3, exit through the door closest to it, and cross the airport roadway. Though it’s impossible to see in this picture, there really is grass on the far side. 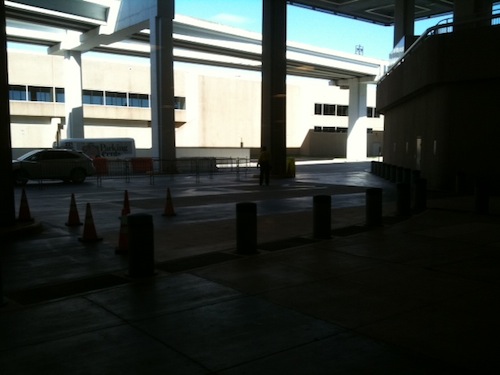 This is a terrible picture -- I promise you there's a strip of grass alongside that sunlit building. This is the view from inside IAH Terminal C baggage claim, next to baggage carousel 3.

Please note that you can’t get back in through the door by carousel 3, so you’ll need to walk a very short distance to a main door located near baggage carousel 12 (you might want to locate this door before you exit the terminal). You’ll also, of course, need to bring a poop bag with you.

Someday I hope to get to the pet relief areas at IAH’s Terminals A and B — when I do, I’ll update this post. If you get there before I do, send me an e-mail and let me know what they’re like!