It’d be too much of a stretch to call this a dog travel photo, especially since Chloe happened not to be with us when we had lunch at Le Tagine, in Paris’s 11th arrondissement (she could have been there, mind you — and in fact, the next table over sheltered a terrier of some kind). I wanted to tell you a story, though, about dessert. 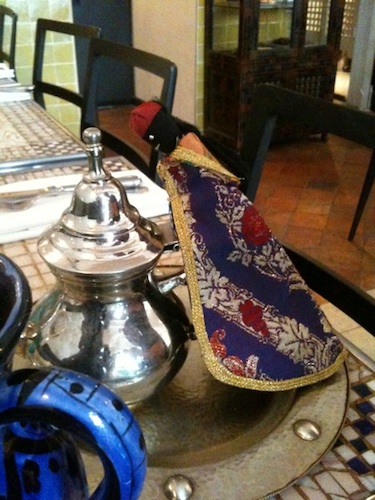 This pot looks small, but was actually bottomless

We’d each had a salad and a tagine (duck & fig for me, chicken & olives & preserved lemon for Walter, in case you were wondering), and I was ready to call it quits. Nothing for me, I told our waiter, an older man who’d received our previous requests (and our rapturous praise of the tagines) in unsmiling silence. A coffee for me, said Walter, and the rhubarb ice cream. When our waiter returned, he was carrying two tea glasses, the teapot you see in the picture, and Walter’s ice cream.

You’ve probably seen mint tea being poured at a Moroccan restaurant, but I hadn’t. It was a gorgeous, and slightly dangerous, piece of drama, and I was enchanted. “Oh, gosh!” I exclaimed, “that’s fabulous!” (we’d previously been speaking what passes, with us, for French).

He not only smiled, he spent the next minute or so muttering “Oh, gosh” to himself, in a strong accent, which made me laugh. In an instant, the chemistry between us had changed, and a delicious meal had also become a delightful meal.

And the mint tea — hot and fearlessly sweet — was perfect. He was exactly right to take matters into his own hands, and bring us what we should have ordered.