A couple of weeks ago I posted a review of Narrow Dog to Carcassonne, describing a British couple’s voyage in their canal boat from England’s West Midlands to southern France. I mentioned that I had found it by chance, in the course of looking for (and failing to find) an entirely different book, Irreverent Curiosity. A day later, David Farley, the author of Irreverent Curiosity, contacted me by e-mail and thanked me for my interest in his book. I assured him that I’d track it down, no matter where Barnes & Noble had decided to shelve it, but he very kindly had his publicist send me a copy.

As I’d suspected, Irreverent Curiosity tells an irresistible story. Farley and his wife, writer Jessie Sholl, move from New York City to the Italian village of Calcata to investigate the mysterious disappearance of the village’s main claim to fame: The Santo Prepuzio (the Holy Foreskin), once the most important relic in Christendom.

Christians believe that Jesus Christ ascended into heaven shortly after his resurrection, taking with him all of his body parts — except his foreskin, snipped off when he was a child (inventive relic hunters also claimed possession of his umbilical cord and baby teeth). For the generations of believers who sought comfort, healing and fortune from relics — especially the bodies, and body parts, of saints — the Holy Foreskin was the ultimate relic, an actual piece of the Savior’s flesh. It was venerated, imitated (Farley refers to between ten and eighteen claimant foreskins), and then, as the Church distanced itself from the cult of relics, suppressed. Calcata’s foreskin, with the best lineage of all the claimants, survived the Reformation and the Sack of Rome only to end up in a shoebox in a priest’s closet, from which it vanished in 1983.

Farley’s explanation of the historical and spiritual significance of the Holy Foreskin is a straightforward piece of scholarship, though an unusually entertaining one. The other half of his tale, his search for the missing relic, is handled much differently. Farley gives the reader a photo album of modern-day Calcata (including, for example, snapshots of the pugnacious owner of a favorite restaurant, a self-proclaimed fascist who brings Southern casseroles to village potlucks, an artist who lives in a series of caves with flocks of birds), the way your grandmother would hand you a pile of family photos and let you sort through them, figuring out relationships and meaning from a gesture or a look. The reader is invited to piece together phrases and hints, as Farley himself does in his search for answers.

But what, you’re asking, does all this have to do with small dogs? Farley and Sholl’s dog, a MinPin/Chihuahua mix named Abraham Lincoln, accompanies them to Calcata. I won’t go into details, but I will say that Farley carries off the ultimate sneak — one that makes my contemplated sneak onto Amtrak with Chloe pale by comparison — and that the (quick) picture he paints of dogs and their place in a charming Italian hilltop village is…not charming. It’s a bracing reminder for travelers with dogs to be aware of the culture they’re joining, and adjust their behavior to protect their pets. 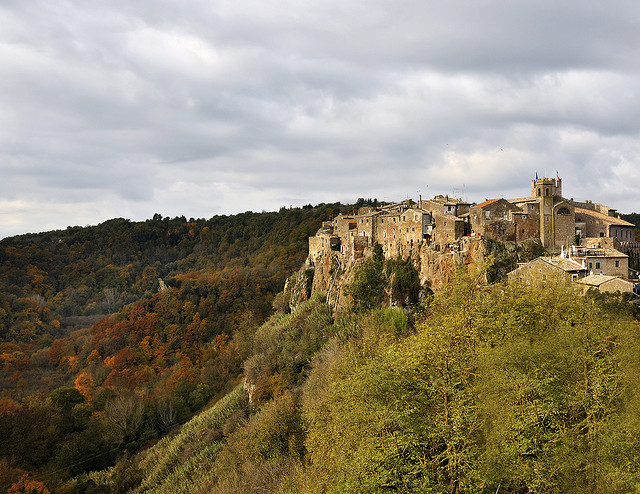 So why, after praising the story and the pointillistic storytelling, have I given Irreverent Curiosity only four bones, not five? Two reasons — although I understand that a tale about the Holy Foreskin cries out for a little wordplay, I wish Farley had been more light-handed in his use of phrases like the “pious penis,” the “miraculous membrane,” etc. (to be fair, they’re mostly gone by the middle of the book); and I think he tries too hard to insert a sense of urgency and menace into the tale of his search. The story is interesting enough to stand on its own, without the Dan Brown treatment.

Amazon link:
An Irreverent Curiosity: In Search of the Church’s Strangest Relic in Italy’s Oddest Town