It’s hot and muggy in New York right now — if we didn’t have a dog, we’d find a bunch of reasons not to leave the hotel — but even the nearly-perfect Chloe requires at least one walk a day. On the bright side, I’d been looking forward to trying some of the suggested routes in City Walks with Dogs: New York.

You’ve probably seen the City Walks series, published by Chronicle Books — each is a collection of fifty 4″ x 5″ flashcards with a route on one side and a descriptive paragraph on the other, and they’re available for major cities across the U.S. and around the world (also check out Village Walks, available for Tuscany, Provence and Ireland). Chronicle Books added several City Walks with Kids to the roster (New York, London, Paris, San Francisco), and last year they published their first two City Walks with Dogs (New York and San Francisco).

The fifty suggested New York walks with dogs are sprinkled around the boroughs, though the majority are in Manhattan and Brooklyn. There are three close to our hotel, and we chose to do #16. Called the “Upper East Side,” it starts at 86th and Lexington and takes you to Carl Schurz Park (and then back, by a slightly different route). Along the way, it pointed out a couple of dog-friendly places to snack, a high-end pet store, and a dog park. We liked it because the flashcard is small and manageable — easier to consult, even, than an iPhone app — and it took us on a well-considered route to a cool place.

Carl Schurz Park is a beautiful, large park on the East River, with lots of shady paths and a really impressive number of operational drinking fountains (hey, it was hot — shade and water were my obsessions). 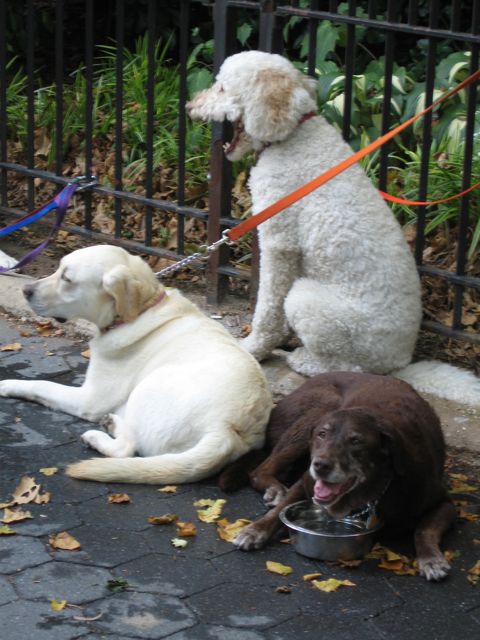 The water bowl is mine. All mine.

The planting is lovely, and there are great river views from the esplanade (of the Kennedy Bridge and the Hell Gate Bridge in one direction, and Roosevelt Island and the Queensboro Bridge in the other). People were picnicking and, dear God, sunbathing; it was a comfortable, friendly place to be and I’d return in a heartbeat. 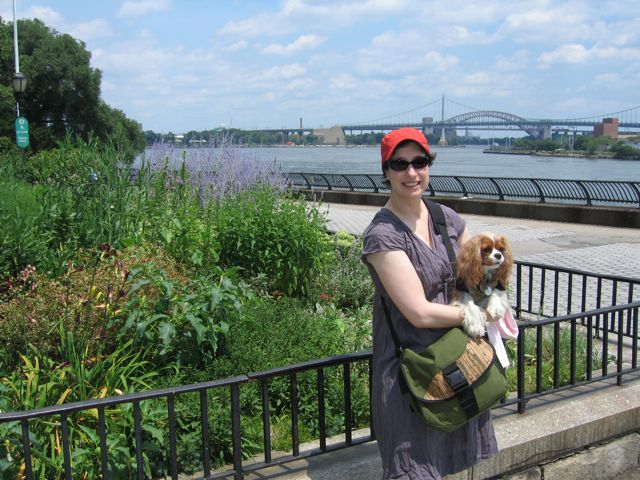 At Carl Schurz Park, looking north (well, you are, anyway; Chloe and I were looking south)

The park is also home to Gracie Mansion, which is hidden from nearly every angle, and a small (a very small) dog park for small dogs. There is a second dog run for big dogs, but we didn’t happen to walk by it. Leashed dogs are allowed in the park, except for some marked patches of lawn. 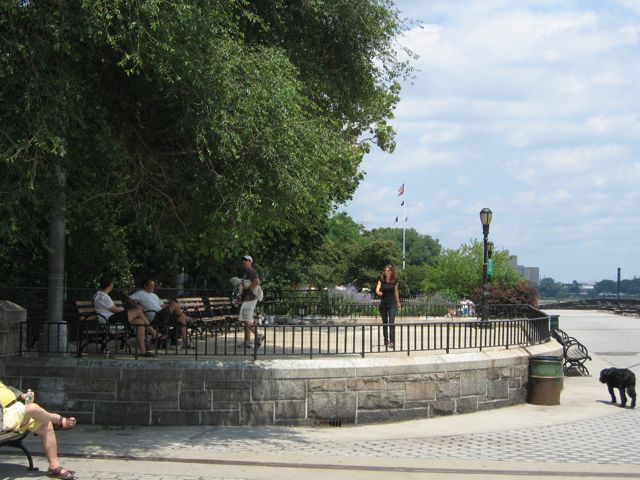 The very small small-dog area -- strangely barren, but fenced, and with a great view

One walk down, forty-nine to go. I think our next choice will be either a walk along Roosevelt Island’s esplanade (#17) or one that winds around the north end of Central Park (#18). I’ve already ordered the San Francisco version, for our next trip to the Bay Area.