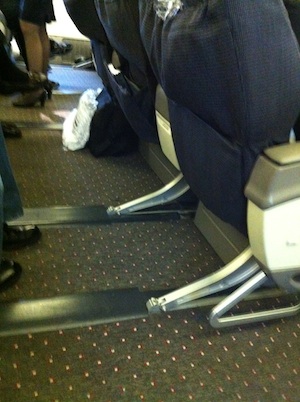 No room for a dog in First Class

This is only a partial report because you board a 757 (in this case, a -200 series) from the side, and hoi polloi never see First Class. I hope that someday I’ll travel First Class on a United 757 or (more likely) that a kind reader will post the measurements I couldn’t get for you. [10/3/10 My husband recently traveled on a United 757-200 in First Class, and although he didn’t have a tape measure with him, he was confident that no dog, however small, could fit in the First Class under-seat space. He said it was only about 6″ tall.]

The rest of the cabin is divided between Economy Plus (sincerely recommended, as I’ve said before, for the five extra inches of leg room) and Economy. Both have three seats on either side of the aisle. The exception is Row 8, which only has two seats, and only on the right — but it also has a bulkhead, so you can’t sit there with an in-cabin dog anyway. There is also no under-seat space under the left side of Row 9, the first row you encounter as you enter the plane, so that’s not an option either.

The under-seat measurements are the same for both Economy Plus and Economy. On this plane, the clear winner is the middle seat, followed closely by the window seat. Although there’s a place for a life vest, the packets are empty (per the safety video, use your seat cushion), so the under-seat height is a roomy 12 inches. The window seat space is 18.5 inches wide, the middle seat space is a glorious 20 inches wide, and the aisle space is a dire 12.5 inches wide (curse those rails). The depth (measured front to back) is about 17 inches.

[10/20/14 I’m editing this post to add a link to a later post I wrote, including a picture of Chloe’s large SturdiBag in place under a window seat in Economy Plus on a United 757-200, and also to add comments first posted on Dog Jaunt’s Facebook page by reader Heather. She too flew on a United 757-200 with her pup in a large SturdiBag, but her flight was domestic, not international. Heather reports that “there are electrical outlets between all the seats, so there is a big chunk from both aisle and middle seats. A good 5-6 inches is taken up. I think the window is unaffected.” She sat in row 36, in the Economy section, and she sent this picture: 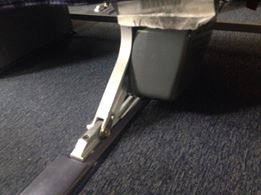 Given the light, it looks like Heather took this picture from the aisle seat, facing towards a port-side window seat — you can see the obstruction under the middle seat, and it looks like the window seat’s under seat space is unobstructed.

Actually, looking back at my earlier posts, I’m a little bewildered: My photo was from an international flight on a United 757-200 (those yoga pants mean hours in a curled-up position), but my written report was from a domestic flight (no one is sending a plane across the Atlantic with only seat cushions as a flotation option). On both of my flights, the middle seat was workable, though the window seat was also an excellent option. I can well believe that United’s international 757-200s have different under-seat configurations than its domestic version of the same plane, but what explains my measurements from 2010? I suppose it’s not unlikely that things might have changed in four years. Whatever the explanation is, thank you, Heather! And heads-up, Dog Jaunt Nation — on domestic United 757-200 flights, choose a window seat.]