February means the TED conference for us, so off we went again to Long Beach. Last year we stayed at the Hilton Long Beach, which was pleasant, but this year we opted to be a little closer to the convention center and stayed at the Renaissance Long Beach. It’s not a dazzler, but it was comfortable — and the staff could not have been kinder. I should mention that we paid our own way at the Renaissance — I’ll always let you know when something I’m reviewing has been paid for by someone else.

Dog’s-eye view: Some hotels have snazzy dog packages that you get when you check in or first arrive at your room. The Renaissance is not one of those hotels. However, when I mentioned that we were traveling with raw food that needed to be kept cold, the hotel promptly sent a little fridge up to our room. The staff who saw Chloe most (the concierge and the valets) learned her name (and mine) almost instantly, and cooed over her in a heart-warming way.

There is a tiny patch of grass just outside the hotel on Ocean Boulevard, and there’s a very useful park/lawn just a short block to the east, so bathroom breaks were no problem even after dark. 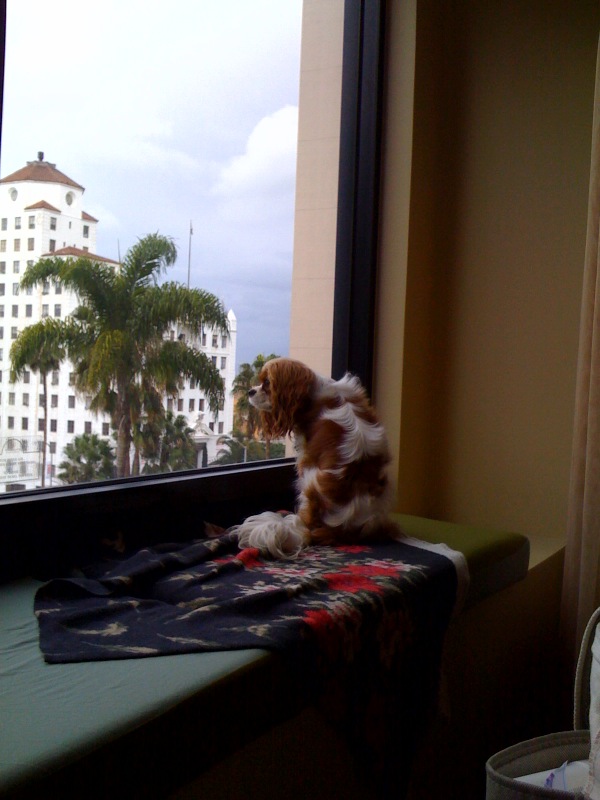 Chloe and the view

What we liked: As I’ve already mentioned, the staff was very friendly. The room was a typical, pleasant, high-end chain hotel room. Ours had a fine view (here’s a picture of Chloe enjoying the view) and I’m always a sucker for Aveda bath products. The shower head was very good. The room service food, which is pretty much all I ate, was really excellent, with one exception (see below). I can highly recommend the Cobb Salad (they’ll swap feta cheese for the blue cheese), the hummus and pita, and the Eggs Benedict.

What we didn’t like: They charged $12.95 a day for wireless access, which I think is criminal. A hotel like this should offer free wireless. The bathtub was too small for a soak. And the breakfast potatoes were dire. In general, I would avoid the room service breakfast during peak breakfast hours. Hold off, if you can, until the rush settles down, and never get the breakfast potatoes.

Next time? We’ve already made plans to stay there next February, though I should add that the Westin Long Beach, a couple of blocks away from the Renaissance and directly across the street from the convention center, is also pet-friendly.