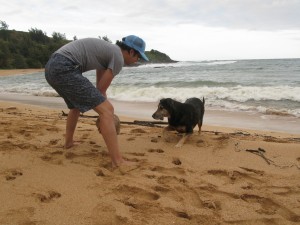 Playing fetch with a coconut (Photo by grenade)

[8/15/11 I’m thrilled to report that this post, and the two posts that followed it, are now out of date. I’ve just learned that Alaska Airlines is now allowing small dogs and cats to travel in-cabin to Hawaii, as of today’s date.]

Impossible, you say! Well, just about — but I think I have three options for you. A couple of days ago a Dog Jaunt reader posted a comment asking for help with her move to Hawaii — she’d worked out all the complicated vaccination and paperwork requirements, but dreaded putting her dog in the cargo hold, especially given the extreme difference in temperature between Denver and Honolulu.

I hadn’t dug deeply into the issue, since Hawaii, for me, is the home of some really enormous tropical bugs. Now I have, and here’s what I’ve learned. According to Hawaii’s Department of Agriculture website, the state has no problem with dogs arriving as in-cabin passengers:

The Department of Agriculture does not have any regulation regarding where pets fly within the aircraft. It is totally up to each airline’s policy. The airline is required by law to bring all incoming animals directly from the plane to the Airport Animal Quarantine Holding Facility.

That’s a hassle for the airlines, and nearly all of them have responded by banning dogs from in-cabin travel to Hawaii. Twenty-four airlines currently fly into Honolulu, the location of Hawaii’s quarantine facilities (if you’re flying to Hawaii with a dog, you need to fly into HNL). Two airlines are charter-only, four are only inter-island, and sixteen either forbid all pet dogs (Alaska), carry them only as cargo (Air Canada, Continental) or do not allow them in-cabin (Hawaiian, American, Delta, Northwest, United, U.S. Airways, Air New Zealand, Air Pacific, ANA, China Airlines, JAL, JetStar, Philippine Airlines, Qantas).

That leaves only two airlines: WestJet and Korean Air. When I spoke to customer service representatives from each airline this morning, I was told that both allow dogs to travel in-cabin to Honolulu. I asked a couple of times, because I just couldn’t believe it, and even after they double-checked the answer was still the same. So here’s the deal: You can take a direct flight from Vancouver, B.C. to Honolulu via WestJet, or you can take a direct flight from Incheon to Honolulu via Korean Air. For U.S. residents, flying to Vancouver is obviously easier than flying to South Korea, but I thought you should know about both choices. (Please note that I asked only about direct flights. Korean Air only flies to Honolulu from Incheon, but WestJet has other flights that ultimately end up in Honolulu.)

Another choice — the last one I know about — is to join a private travel club like Dogtravel Company, which organizes pet-friendly charters around the world. I know nothing about the service beyond what I’ve read on its website, so I don’t have a review to offer you. It’s an intriguing idea, though.

Be sure, of course, to double- and triple-check the WestJet and Korean Air options before you book. If you do take a dog in-cabin to Hawaii, please write and tell me about your experience — and if you know of another way to travel there with an in-cabin dog, please let me know!

[A few days after this was posted, a WestJet representative wrote to me and told me that their agent had misinformed me, and that WestJet does not allow pets to travel to Hawaii either in-cabin or as checked baggage.]